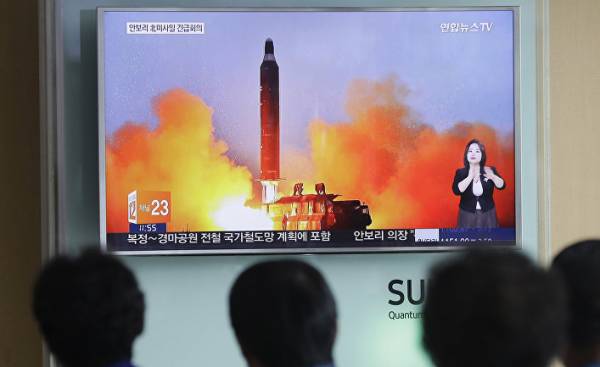 While countries widely recognize that economic sanctions are not able to solve the fundamental issue of nuclear disarmament of the DPRK, the situation on the Korean Peninsula has reached a critical point.

The murder of Kim Jong-Nam, the expulsion of the Ambassador of Korea from Malaysia, an interview with high-ranking North Korean diplomat, who fled from London to Seoul, the tweets from trump’s criticism of the DPRK. The chain of these events requires us to answer the question: did the situation with the nuclear problem of the Korean Peninsula a critical point? The same question was faced and U.S. Secretary of state Tillerson during his visits to China, Japan and the Republic of Korea.

It is worth noting that over the past few days regarding policy toward the Korean Peninsula has made some new key words, such as “preemptive strike” or “decapitation”. This means that in the understanding of the Korean question, there are major changes, and its complexity has already surpassed all the hottest international issues.

As for the two major powers, China and the United States, if they will not be able to respond to a dangerous situation on the Korean Peninsula, it will be difficult to fully implement an ambitious plan of “sovereign diplomacy.” The Peninsula has become for them “emit poison sting”.

Tae Yong-Ho, who escaped to South Korea Advisor to the DPRK Ambassador in London, said in an interview that the current North Korea has become a slave society, the servants of the family Kim. Although he put it rather harshly, it seems that the death of Kim Jong-Nam, was the result of the attack, has worsened the international image of Kim Jong-UN, and the DPRK is rapidly losing legitimacy in the outside world.

It is noteworthy that the new US administration has not yet developed a clear policy towards the DPRK. Tillerson’s actions in East Asia aimed at stabilization of the situation in the region, particularly the key of the Union of Japan and South Korea. USA “explore” the region: the need to listen and understand each side, especially the position of China.

During the visits Tillerson, trump posted a tweet in which he wrote that North Korea is acting very badly and accused China of a lack of care.

It’s pretty much at odds with the judgments Tillerson. The Secretary of state and the White house have not formed a common position regarding North Korean policy. In this situation, the Tillerson’s visit was extremely important for “foreign policy studies” the new American government.

North and South are committed to absolute safety. Especially in conditions when the development of nuclear weapons in the DPRK have reached a critical point. In the past year, she has twice conducted nuclear tests, which is completely contrary to generally accepted standards.

This year, the DPRK again made several launches of ballistic medium-range missiles aimed to hit the Japanese and American positions. Successfully completed and testing of solid rocket motors. In his new year greetings to Kim Jong UN stated that North Korea is ready to launch missiles.

It is highly likely that in the first half of 2017, Korea will make the launch far destination. This means that, theoretically, against the United States created a means of nuclear deterrence. During a press conference Tillerson openly stated that China and the United States understand that the situation is extremely serious and dangerous.

Trump haven’t figured out how to deal with North Korea, but it is clear that the North Korean policy of the last 20 years, was unsuccessful. “Strategic deterrence” of the Obama administration also came to an end.

Trump and Kim Jong UN are just beginning to get used to each other, but now we can confidently say that to soften the Korean policy of the United States is extremely difficult. Tillerson’s actions in East Asia trying to measure the temperature of the nuclear issue of the Korean Peninsula. In such a situation, there appear the judgments of preventive war and changes in the content of the joint military exercises the US and South Korea, for example, participation in the exercises of the U.S. special forces.

North Korea is constantly trying to compete with the United States. In the development of nuclear weapons, they managed to reach some qualitative changes, and now she is one step away from creating powerful awesome force. Tae Yong Ho also believes that Kim Jong-UN openly seeks nuclear weapons because it wants to seize leadership in the strategic relationship between America and China. Kim, for so long held the reins of power, it is only necessary to acquire nuclear weapons, and she will be able to gain control of the United States, South Korea and China.

Nuclear weapons, the North Korean political regime and the identity of Kim Jong-UN are closely intertwined, and in such circumstances, the existence of the nuclear issue on the Korean Peninsula is almost inevitable. America is not able to tolerate nuclear deterrence from North Korea, so the US government is planning to re-classify the DPRK to the state sponsors of terrorism.

According to Tillerson performed in the last 20 years against the DPRK policy has failed. He probably had in mind that the biggest defeat lies in turning the DPRK into a nuclear state.

A split in the Peninsula, America enters into a Union with the South and opposed to the North. Thus, the Korean Peninsula becomes a wedge that the United States sacrificed in the security system of East Asia. However, possessing nuclear weapons, North Korea definitely can’t become a chess piece in the hands of America, and this is also a puncture in its policies.

Having acquired nuclear weapons, North Korea is changing the rules of the game that existed on the Korean Peninsula for over 20 years. Simply put, the old game will be no more. Now there are two versions of events: either complete this opposition and achieve in the new environment of compromise between all parties, or to finish the game by military means.

At a press conference the Minister of foreign Affairs of China Wang Yi said that either the confrontation on the Peninsula will continue to increase, or the parties would return to the negotiating table. For more than 60 years of Sino-us relations has changed beyond recognition, at a high level, there is constant interaction, and the likelihood of incorrect judgments decreased significantly.

In achieving the goal of denuclearization of the Korean Peninsula China and America in the highest degree unanimous, the parties also reached agreement on the prevention of a crisis situation on the Peninsula. Any changes and unrest should not be a surprise to China and America.

After a telephone conversation of the heads of China and America, between the countries was continuous dialogue at the highest level in the fields of diplomacy and security. Although the achievement of full understanding is hardly likely, it will be possible to reach agreement on key issues, which is extremely important under conditions of conflict escalation on the Peninsula. However, the question of the mode of nuclear disarmament of the Korean Peninsula still remains open.

Equally important in this problem is a matter of choosing the right strategy. Beyond adopted by the United Nations economic sanctions, it becomes clear that this method is ineffective for such a closed country like North Korea. And while all countries are coming to realise this and start to make some changes, the situation on the Peninsula is nearing a critical point.

Although Tae Yong Ho is constantly abroad, he is confident that North Korea’s economy is already completely ruined. And let his judgment contains a lot of personal experiences, nuclear test, Kim Jong-UN has changed the external environment faced by the DPRK and made it a common threat to the international community. One Kim Jong-UN does not understand this and continued to race towards his goal, which may eventually lead him into the abyss.