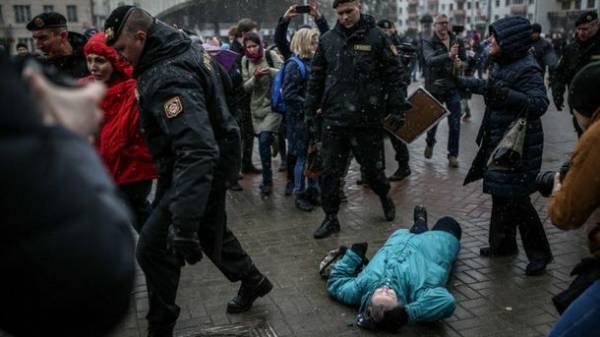 During a rally in Central Minsk to mark the freedom Day, the soldiers of the local Riot police knocked down the 68-year-old. About it told the journalist of “New time” Christina Berdinskih.

“In the video, 68-year-old pensioner, tells me that she is not afraid to go to the freedom Day and 10 minutes later after this interview, it knocked down a riot. The woman got in their way when they fled from another detained girl to the paddy wagon. Grandma hit her head on the asphalt. Then the riot police took her to the ambulance, – wrote the journalist on his page in Facebook, having published the corresponding video.

As reported today in Minsk, the security forces severely broke up the rally, detaining hundreds of people.