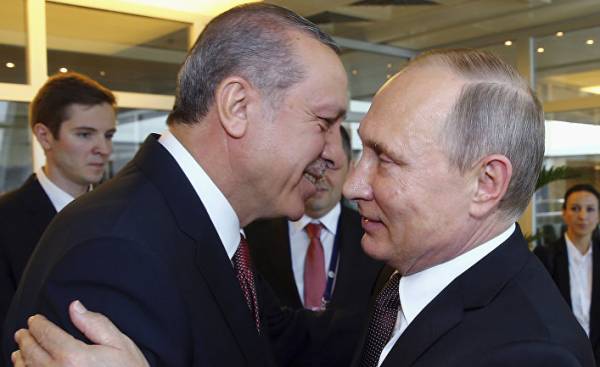 In recent days, along the axis of Turkey — Russia there are interesting and extremely important events.

Preventing the promotion of Turkey in Manbij, demonstration of cooperation with the Russian Party “Democratic Union” (PYD) and in this regard reports that Russia will create a military base in Afrin, the suspension of Turkey’s wheat purchases from Russia and Moscow’s statement that “ban tomato” will continue, is the first thing that comes to mind.

Nevertheless, after attempting a coup in Turkey on July 15 and handshakes of the leaders of the August 9 “airplane crisis”, which lasted eight months, it seemed, remained behind. Moreover, after just a few weeks after this meeting, the two leaders of Turkey with the approval of Russia at the beginning of the operation “shield of the Euphrates,” and the impression that the relationship will quickly be on the road to recovery. In addition, the first place on the agenda of allegations that Ankara, which on 15 July have not met the expected support from the West, began to focus on Moscow.

But now the picture is different…

The main reason for the “fights” between Turkey and Russia is that two countries that share a single region, you see competitors in each other.

Russia, however, due to the success achieved during the Syrian operations, not only largely went ahead in the competition with Turkey, but also scored points on the international stage, and the gap between the two countries has increased significantly.

Moscow, which benefited from the vacuum created in the process of regime change in the United States, managed to get everyone to talk a lot about yourself. Moreover, Russia has been regarded as a country able to influence the outcome of presidential elections in the United States, regardless of whether it’s true or not.

For Turkey, the price of “airplane crisis” was the fact that she has conceded the initiative to its competitor in almost all areas. Relationships that before the incident with the aircraft was relatively balanced after the crisis changed its nature, and Russia has become more to look down on the Turkey.

Complex process experienced by Turkey in foreign policy, Russia is also trying to use to their advantage.

She tries, for example, to drive a wedge between the West and Ankara, but the main purpose of this tactic is not in the true sense to attract Turkey to their side, and subdue the Turkey itself, to take the reins into their own hands.

Russians know that the isolation of Turkey from the West is virtually impossible, and do not want to get too close with a country that is not considered “his”. Instead, they prefer to keep Turkey at a controlled distance.

The fact that talking about the level of “strategic partnership” between Turkey and Russia due to objective reasons it is impossible: interfere with this conflicting interests of the two countries.

So, Russia, which is due to the operation of the Syrian caught the wind in its sails, on the one hand, takes revenge on Turkey for the “airplane incident”, the other — trying to weaken their regional competitor.

And so it shows its ties with the PYD and openly says she will continue to enforce the “ban tomato”, not considering it necessary to resort to diplomatic terms.