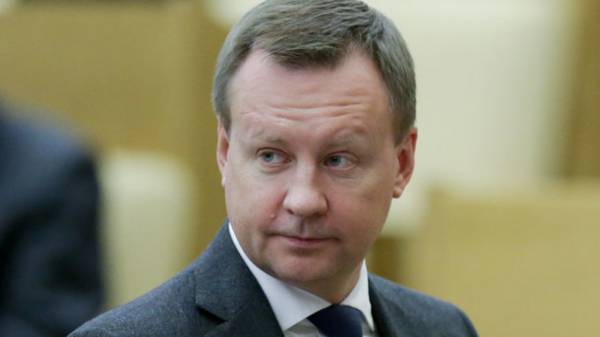 In the center of Kiev on March 23, shot dead the former Deputy of the state Duma Denis Boronenkov. Policies in the last year with his wife moved from Russia to Ukraine and expressed political persecution. In February ex-MP began to actively communicate with the media and to criticize the Russian government. High-profile crimes in the Ukrainian capital have covered most of the major world media. The website “Today” found out that the foreign press spoke about the murder of a Russian politician in Ukraine.

The Guardian: Fleeing to Ukraine Russian ex-MP killed in Kiev

Popular British newspaper The Guardian on the day of the murder of Denis Boronenkov said: the ex-MP, speaking against the policies of Vladimir Putin, was shot dead on a busy street in the center of Kiev. At the beginning of the article, the journalists highlighted the position of the Ukrainian authorities: “the President of Ukraine Petro Poroshenko immediately pointed the finger at the Russian authorities, calling the murder “state terrorism.” According to Poroshenko, the newspaper writes, Boronenkov was one of the “main witnesses of Russian aggression against Ukraine and the role of Yanukovych in the placement of Russian troops in Ukraine”.

The Guardian also took a comment from a former colleague Boronenkov Ilya Ponomarev. “He told me that you received threats from the FSB,” – said the politician. On the eve of the murder of Denis Voronenkov was going to testify on the case of Viktor Yanukovych, who is currently in Russia. “Russia annexed the Crimea and supported separatist forces in Eastern Ukraine in a war in which killed ten thousand people. After fleeing to Kiev Boronenkov said that he supported the annexation of Crimea because of political pressure” – says the journalists.

The article mentions the position of the Russian authorities. In particular, it quoted Putin’s press Secretary Dmitry Peskov that it is absurd to blame the murder of Moscow.

“Voronenkov talked about possible Russian retaliation after he ran away, but said to hide will not. He gave a number of interviews after his flight, which sharply criticized the Russian President and the Kremlin’s policy in Ukraine. He compared modern Russia with Nazi Germany and called the illegal annexation of the Crimea”, – writes The Guardian.

“He gave a number of interviews after his flight, which sharply criticized the Russian President and the Kremlin’s policy in Ukraine. He compared modern Russia with Nazi Germany and called the illegal annexation of the Crimea”, – writes The Guardian.

Briefly, the article also mentioned statements by Denis Boronenkov during his MP. The publication writes that the Russian investigative Fund of struggle against corruption Alexei Navalny has named former Deputy a hypocrite. Supposedly Boronenkov before enthusiastically supported Putin and the annexation of Crimea. In addition, according to British journalists, many Ukrainians have not approved the decision on granting Ukrainian citizenship Voronenkov, suggesting that the politician is trying to avoid problems with law in Russia.

One of the largest media New Zealand NZ Herald recalls the ex-Deputy fled from Moscow, fearing that his life is under threat because of the “secret service of the President Putin.” “Voronenkov testified against Pro-Russian former President of Ukraine Viktor Yanukovych… 45-year-old MP left Moscow in October together with his wife, Opera singer Maria Maksakova,” – said in the article. Journalists, quoting Petro Poroshenko, announced the theory that the murder involved the Russian special services. The article also has the answer Peskov that the involvement of the Russian Federation categorically denies.

By the way, NZ Herald writes that the bodyguard Boronenkov was an employee of SBU. It does not specify that yesterday in a press-service of the Ministry denied this information. In addition, the publication suggests that the killer is a citizen of Ukraine – could be “ethnic Russian”.

“Bodyguard, who was the employee of security Service of Ukraine, remained in the hospital. Ukrainian authorities said that the killer was identified as a Ukrainian citizen, although he may be ethnic Russians from the breakaway East of the country or from the Crimea”, – journalists write.

“Bodyguard, who was the employee of security Service of Ukraine, remained in the hospital. Ukrainian authorities said that the killer was identified as a Ukrainian citizen, although he may be ethnic Russians from the breakaway East of the country or from the Crimea”, – journalists write.

European publication EURACTIV in his article has focused on the possible involvement in the murder of Denis Boronenkov Russia. “Voronenkov fled to Ukraine last year and helped the Ukrainian authorities in the investigation against Yanukovych, the former Pro-Russian former President of Ukraine. Boronenkov also spoke against the accession of Russia to the Crimea in March 2014, although he had voted “for”. President Petro Poroshenko said that the murder “is an act of state terrorism by Russia,” the journalists write. EURACTIV also quoted Peskov, who said that the accusations against Russia “absoudre”. 45-year-old Boronenkov, journalists write, is in Federal search in Russia in connection with the fraud.

The largest American newspaper The New York Times called the murder of Denis Boronenkov “the last of a series of important political murders” of politicians, who criticized the Russian authorities. Also journalists have noted that on the same day, in the Kharkiv region, a fire occurred at an ammunition depot. According to one version, the incident also involved the Russian special services.

“In Ukraine, Boronenkov promised to testify in the criminal case against former Ukrainian President Viktor Yanukovych, as well as provide insider information about the actions of the Russian government during the Russian annexation of Crimea in 2014,” write the journalists. 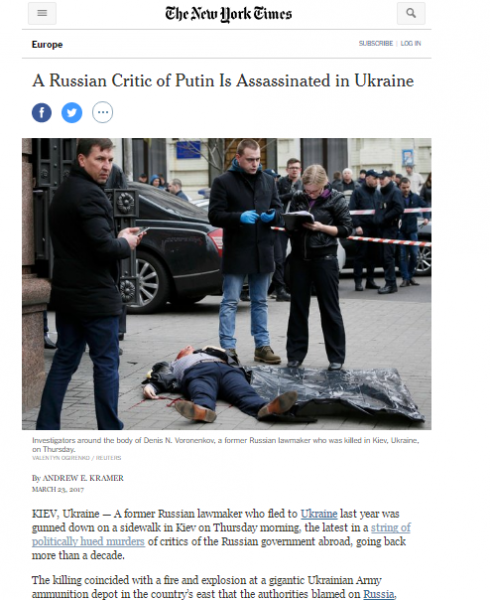 In his statement, notes the edition, Poroshenko called Boronenkov “one of the main witnesses of Russian aggression against Ukraine.” The murder itself, said the material was “extremely bloody.”

“Voronenkov worked as a Prosecutor in Russia before coming to the Parliament and communicate with close aides of President Vladimir Putin. Vladislav Surkov, a senior political adviser to Putin, attended the wedding Boronenkov,” writes The New York Times.

“Voronenkov worked as a Prosecutor in Russia before coming to the Parliament and communicate with close aides of President Vladimir Putin. Vladislav Surkov, a senior political adviser to Putin, attended the wedding Boronenkov,” writes The New York Times.

The article also quotes the people’s Deputy Anton Gerashchenko, who says that the Russians “want to show that someone who wants to escape from Russia, will be eliminated at any cost.” The article ends with a quote Peskov, in which the version of the Ukrainian law enforcement officers he called “absurd.”

“For the second time in one year in Kiev, killed a man granted asylum in Ukraine because of the conflict with the regime of Russian President Vladimir Putin,” writes frankfurtthe newspaper Frankfurter Allgemeine.

The journalists remind that last summer, blew up a car, at the wheel which there was a journalist Pavel Sheremet, who, like Boronenkov, criticized Russian government. 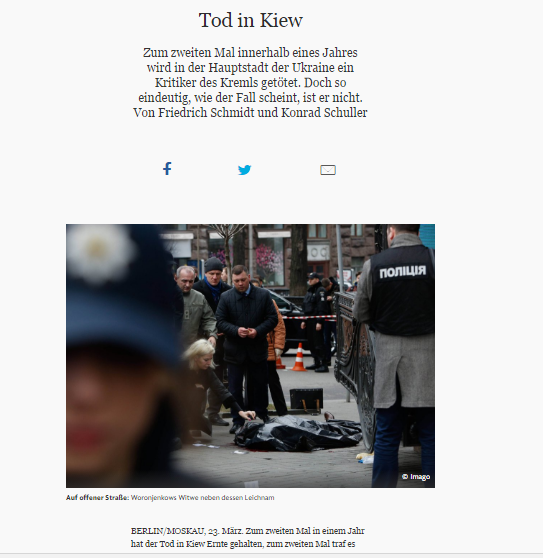 Petro Poroshenko said about the Russian “state terrorism,” and Prosecutor General Yury Lutsenko told about the two versions of what happened.” The first is that the ex-Deputy could have been killed due to the fact that shortly before the flight to the Ukraine allegedly exposed a group of Russian smugglers who were under the protection of Putin. The second version, he was connected with the fact that Voronenkov was “the chief witness in a treason of the former Ukrainian President, Viktor Yanukovych, says the publication. While the article notes: some of the circumstances of the murder indicates that the priority is still “version of Yanukovych.”

Mentioned another version: Boronenkov could use in Russia, his official position for personal gain. In February of the current year in the Russian “Novaya Gazeta” published an article where Voronenkov has been shown as “typical Deputy in Putin’s Russia, a way of life which can hardly be explained by official income”.

The Washington Post: a few days before the murder of Putin critic said in an interview that he is aware of the danger

Denis Boronenkov knew is in danger, journalists write the largest American newspaper The Washington Post. “For reasons of personal security, we can’t let them know where we are,” said Boronenkov on Monday evening, when his wife gave an interview to this newspaper.

The President of Ukraine Petro Poroshenko called the killing of Vanenkova “an act of state terrorism by Russia”. Press Secretary of Russian President Putin Peskov called these allegations “absurd,” the article says. 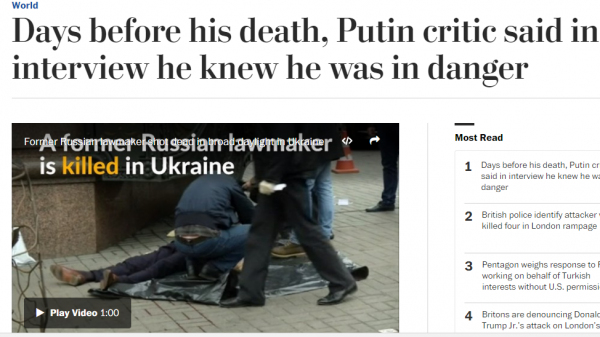 “A few weeks before the death of Voronenkov and a former member accommodating the Russian Communist party, told my friends that followed the chase. Hackers tried to hack into his Twitter account and e-mail his wife. He received SMS with threats, and the police just gave him a bodyguard. There were rumors that he was being watched,” writes The Washington Post.

The newspaper notes: “At a time when the U.S. dominated by Russian influence, death Boronenkov, focus extra attention on the scale (and potential deadly consequences) of the “range” of Russia in foreign countries. It remains unclear who would be tempted to kill Boronenkov (in different versions appear Russian agents, Ukrainian nationalists or the business community), but the fact remains: it is only the most recent case, when the Kremlin enemy dies”.

“…Death Boronenkov, focus extra attention on the scale (and potential deadly consequences) of the “range” of Russia in foreign countries”, – writes the edition.

Also mention that Boronenkov testified against ex-President Yanukovych. “Friends say he also wanted to share with the Ukrainian office of public Prosecutor the data about the Russian smuggling” – the correspondent.