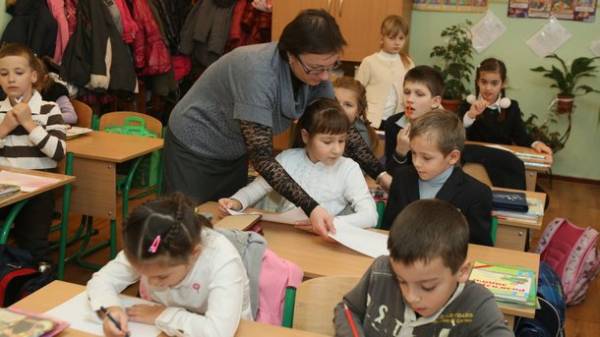 Education reform in Ukraine is in full swing to mon prepared to completely change the school from next year. “New Ukrainian school will be introduced in 2018. This is the new state education standards, but we have a lot of work in different areas: updating the content, training human resources, restructuring and the establishment of a network of educational institutions, changes in the management system,” — said at a meeting of the Council for regional development Minister of education and science Liliya Hrynevych. As long as the reform, and its incarnation is the second reading of the bill in Parliament, which can pass at the end of April. “Today,” I remembered what stages of the reform are already completed and which remain to be completed.

First of all, the reform envisages the introduction of 12 years of study: four years of primary school, five years of basic secondary and three years of specialized school. If the law is adopted soon, the first students will go to school for 12 years already in 2018, and the first issue will be in 2030. it is Expected that from 2018 the Junior school will be learning under the new curriculum — it is already in may, the Ministry plans to adopt a new state standard for elementary schools. In particular, on jobs the children want to give time according to their individual abilities, will reduce the amount of homework, the number of compulsory subjects will be reduced to eight, to teach kids will be using games, teachers will give the opportunity to create programs within the state standard, and most importantly, the assessment will replace the notched mark. Meanwhile, MES is ready to develop and test new programs in 2017 to support schools on request. “We are prepared in these schools to do even a pilot project to implement educational programs throughout Ukraine in 2018,” — said Grinevich.

But by 2022 MES will develop and launch a new State standard of basic secondary education (enhance the study of the Ukrainian language, will make more items to choose from, enter mcqs for 9th grade), and to 2027 — start of the relevant school (will create schools in which the student during the first year may change the profile of learning and level of difficulty). Also plans to 2018 to improve the skills of primary school teachers, creating new textbooks, create netbase e-books and courses, to introduce in schools electronic document management.
Parents and experts say about cold reform. Parents do not like the extra year of study, and experts believe that the 12-year-old is an unnecessary burden and expenses. “E-books will very quickly ruin children’s eyesight,” — said the expert in the field of education Andrew Black.

“Reference” leaders and 200 million on the beads

Another step in the reform of education in the framework of decentralization is the creation of a new grid reference schools. Recall that to optimize the learning process and save in large settlements will now work major (reference) schools that will be equipped with computers, libraries, laboratories, and special classes for the training of starsheklassnikov. Them from the villages will carry on the buses. When these schools are branches of rural schools for the younger grades. According to the Ministry, now in the country are already working 178 such schools, and 511 of their branches. For the equipment of special offices and laboratories has already allocated 300 million UAH for the purchase of buses — 200 million

The Ministry called the region-excellent for creating these educational institutions: Lviv (24 supporting schools), Kyiv and Kirovohrad region (23). The most lagging region Transcarpathian region — there is not created any supporting schools. Also the tail trailing Vinnytsia, Mykolaiv and Odessa regions — each of them function only two reference schools.