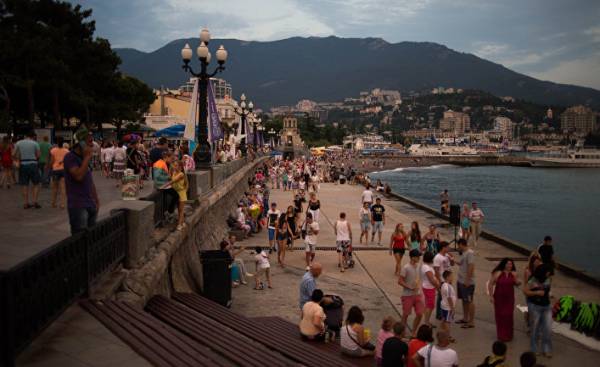 The current tensions in relations between Russia and the West is mainly a consequence of the decision of Vladimir Putin to send troops to Ukraine, which he received three years ago. In fact, this decision of the Russian President was due to his own fears of the growing influence of the West in Eastern Europe.

In the winter of 2011-2012 in Russia were the massive protests of 1990-ies. Outraged by the outright falsification of results of parliamentary elections in 2011 and Putin’s decision to run again for the presidency after four years during which the nominal head of the state Dmitry Medvedev, the protesters formed a rather motley coalition: old-style leftists, cosmopolitan liberals, the noisy nationalists and disgruntled workers. Tens of thousands of protesters with white ribbons on the cuffs passed through the center of Moscow, despite the cold.

Russia has long feared the threat of the Pro-democracy “color revolution” on its territory. She watched the horrors of mass protests, which resulted in the overthrown regimes in the former Soviet republics such as Georgia in 2003, Ukraine in 2004 and Kyrgyzstan in 2005. Putin and state-controlled media tried to portray these movements as the result of a Western conspiracy, machinations of the CIA, funded by George Soros (George Soros). From the point of view of Putin, those protests were a threat to the stability and authority of Russia in the region, which have seriously suffered as a result of the collapse of the Soviet Union, as well as a threat to his personal power.

It is therefore not surprising that Moscow hastened to suppress the nascent “snow revolution”, as it is sometimes called the English language edition. Repression took the form of beatings and the violent dispersal of protesters, arrests of opposition leaders and protesters on trumped-up charges, show trials of dissidents — in particular, the members of the female punk band Pussy Riot and the introduction of new restrictions in the freedom of the press, speech and Assembly.

However, Putin’s aspiration to prevent a potential color revolution went beyond the repression and escalated into a campaign that can be called “Again make Russia great,” and which was aimed at creating a positive image of Russian identity. Through a strategic combination of propaganda and geopolitical aggression, Putin’s government began to promote the ideas and concepts designed to increase the level of patriotism, and with it xenophobia and paranoia.

By the end of 2013, the Russian opposition movement is already falling apart, but Putin has a new headache: the Maidan revolution in neighboring Ukraine — a large, mostly non-violent protest movement, members of which occupied the center of Kiev for several months and culminated in the flight of Pro-Russian President Viktor Yanukovych in February 2014.

This movement arose as a result of Yanukovych refused to sign the agreement on Association of Ukraine with the European Union. From the point of view of Putin, the Treaty was another attempt by the West to invade its sphere of influence. It seemed that the West was surrounded by Russia on all sides.

But Putin was ready for it. Initiating the implementation plan, which was undoubtedly prepared in advance, “little green men” in military uniform without any insignia invaded the Ukrainian Peninsula of Crimea. For several days the Ukrainian military on the Peninsula were forced to surrender, Crimean politicians had to dissolve the Parliament and replaced the Prime Minister to a member of the Crimean party “Russian unity”. After this Crimea “reunited” with Russia. Russian propaganda machine was already working at full capacity, assuring citizens of Russia and residents of Crimea and Eastern Ukraine that the new Kiev government is “fascist junta”, headed by the bloodthirsty Ukrainian nationalists are planning to exterminate the Russian-speaking population, to crucify Russian children and so on.

State-controlled media has taught people that the “return” of Crimea to Russia — is the greatest moment in Russian history since the victory over the Nazis in 1945, which became the basis of Russian identity, tragedy and triumph, uniting the Soviet people. Open violation of Putin for international law and the postwar order by the annexation of the Crimea became aggressive step to return to a time when Russia was still a great power, able to fill its citizens with Patriotic pride. The Russians were shouting: “Crimea is ours!”

The annexation of Crimea by Russia has allowed to revive the idea of Imperial glory, which is rooted in the era of Kievan Rus, a medieval state which became the predecessor of modern Russia and Ukraine. In the 10th century Kievan Prince Vladimir converted his people to Christianity. Vladimir himself, according to legend, was baptized in the ancient Greek settlement of Chersonesos, located on the territory of Crimea. Thus, this Peninsula is a symbolic starting point of Russia’s belonging to the Christian world. Catherine the Great annexed the Crimean Peninsula from the Ottoman Empire without firing a shot, securing for Russia the status of one of the greatest powers in the world.

Of all the losses that accompanied the collapse of the Soviet Union, the loss of Crimea, probably oppressed Russia the most. In his attempts to restore Russia’s lost greatness, Putin began with the point in which stopped Catherine the Great and Prince Vladimir. Annexing the Crimea in March 2014, Putin announced that the Peninsula is a “spiritual source” of the Russian state. Therefore, the Crimea “is of huge civilizational and sacred meaning” for Russia. Putin made this emphasis in November last year during the opening ceremony of the 16-meter tall monument to Prince Vladimir the Kremlin walls.

Although to know the point of view of ordinary Russians is quite difficult, there are many signs that Putin’s campaign “will once Again make Russia the great” was extremely successful — at least in his approval rating within the country. Fragile opposition coalition 2011-2013 quickly collapsed, and against many opposition leaders were put forward false accusations. Boris Nemtsov, one of leaders of the liberal opposition, was shot dead near the Kremlin in 2015.

Today, a color revolution in Russia is practically impossible. The state propaganda machine has made great strides in fueling the hysteria. She was very helpful when US sanctions and the European Union dealt a blow to the Russian economy and led to higher prices for food. These burdens — the burden of which fell mainly on the shoulders of the middle and lower classes — caused the Russians to see in the West a ruthless enemy. Between a few of the cosmopolitan liberal elite and ordinary Russians, among whom nationalist sentiments were much more pronounced, was driven a powerful wedge. This historic neo-Imperial fantasy of Putin allowed him to win some time, giving many Russians a sense of national pride, which they lacked in the post-Soviet era.

However, the situation at any moment can begin to develop in an unpredictable direction. Inciting nationalist sentiment in the East of Ukraine and demanded the maintenance of a certain balance. Not all separatists were believed that Russian nationalism is the surest means to achieve their goals. Some sincerely believed in it, becoming another threat for Putin, who in essence is a cynic trying to capitalize on the ideas of globalization, nationalism and nostalgia for the Soviet era. Because the standard of living in Russia continues to decline, the Russians are increasingly frustrated with the actions of their corrupt politicians and officials.

At the moment, Putin uses the reception of Stalin, blaming all the problems of the foreign enemies of pests within the country and incompetent officials. The question is how long can it take given the weakening of the Russian economy.