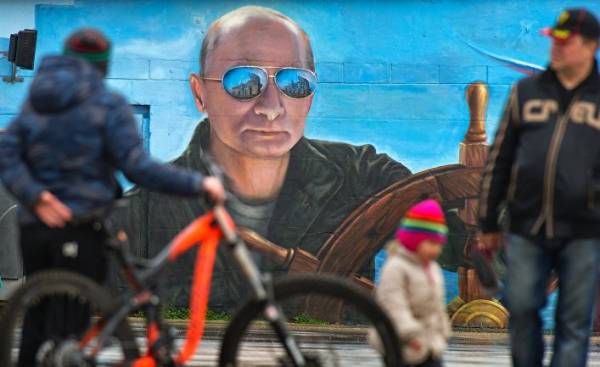 When using the 18 March will be four years after the annexation of the Crimea Russia, Vladimir Putin wants the fourth time to enjoy the people’s love: according to reports from Moscow, it is proposed to transfer the election day and thus, his triumphant re-election on the anniversary of “return of the Crimea home”. The postponement of the voting day would be a demonstration of indifference of Moscow to the international community and the new humiliation of Ukraine.

However, it is the balance of power in Kiev last weekend with indignation and impotence recalled the violation of international legal norms in 2014, and the Minister of foreign Affairs of Ukraine stressed that the authorities will not rest until, until the Peninsula will again be Ukrainian. And in Vienna, the U.S. representative to the OSCE stated that the occupation of the Crimea illegal, and it is inextricably linked with Ukraine. All of this rant, which, however, remain without consequences.

In Kiev and in Western capitals understand that Crimea was part of Russia for a long time. On the return Peninsula in the Ukraine is no question. The best proof: the negotiations never took place.

A little differently for a long time was the situation in the Donbas, where Pro-Russian separatists declared a “people’s republics”. The Minsk peace process, despite its obvious futility, it continues, because there is no “plan B” is simply no. If the negotiations will fail, there will be grounds for sanctions. Minsk is an ideal format to manage the truce. Each side has its own priorities and its plan of action, which is ignored by the opposing side.

It is possible that these meetings will continue for many years — as well as unsuccessful negotiations between Russia and Georgia about the statehood of South Ossetia and Abkhazia, which began under the auspices of the EU, the OSCE and the UN in 2008. Moscow recognized them as “independent States” after the Georgian war, and now they are in her sphere of influence, although in diplomatic language, the situation there is called “frozen conflict”.

Donetsk and Lugansk “people’s Republic” is gradually becoming more included in the Russian sphere of influence. Until recently, there still remained individual elements of the Ukrainian state and economy, as well as Ukrainian civil consciousness. While the Ukrainians have not lost hope for a political settlement of the situation.

The Crimea and the Donbass almost lost

Moscow is positioning itself as not involved in the civil war a third party and denies its intervention, claiming that supports the Donbass out of altruistic reasons. It’s as absurd as cynical, but it is recorded in the Minsk agreements. Formally, the Western negotiators have agreed on this farce, and only occasionally asking Moscow to exert influence on the separatists.

However this game is casted roles coming to an end. Talking about this fact: Putin is gradually deprives local authorities of the separatists, and the local power structure step by step rusifitsiruetsya. It is not excluded that the Kremlin autocrat can use the fact that a weakened Europe is experiencing a year of momentous elections, and in America the government is the President, not having a clear orientation to the political space.

The government of Ukraine, in turn, is doing everything to “protect” the rejection of Donbass. The winners of the internal struggle for power has made the economic blockade of the occupied territories, claiming that they do not want their actions to support the separatists. The reasons for this are many and varied.

Noticeable, however, that many in Kiev are strengthened in the opinion that it is better to accept the territorial losses than go more deeply bogged down in the war. Yet, apparently, there are alternatives to the Minsk agreements, which, however, are not discussed at the negotiating table in the OSCE, and behind closed doors in Moscow and Kiev.