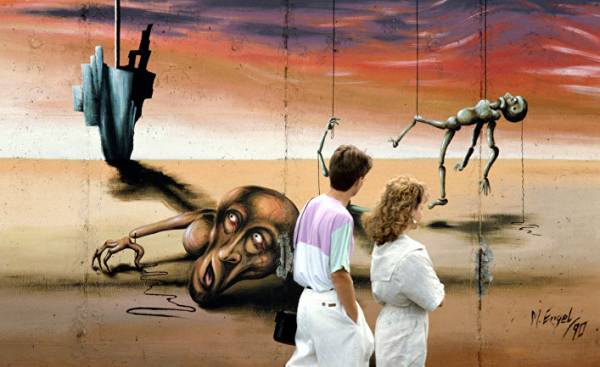 Western liberalism has failed. So says Edward Luce (Edward Luce), a correspondent for the Financial Times, stating their point of view in a book published in Italian translation by the publishing house Einaudi/Stile Libero. Luz is a genius, he studied at Oxford, and interrupted his studies to go to break with a pick (he was only 20 years old) the Berlin wall. He expressed moderately liberal views, does not like the policies of Thatcher and Reagan, preferring rather the idea of progress, a positive anthropology.

He woke up in America trump November 9, 2016, almost 30 years after the “end of history” and the alleged unification of the world under the liberal democratic banner, remembering the invitation to Moscow from the Institute of Primakov. The Institute is named after a famous Minister of foreign Affairs and Prime Minister of the Yeltsin era. Putin (who, incidentally, was in Dresden, when Luz was broken with a pickaxe to the Berlin wall), after Primakov took the post of head of government, considered him a great professional. Luz went to Moscow — he loves educational trip — leaving in the United States American President who adopted the rhetoric of building walls and received support from Putin, whom he admires and who, during the existence of the Berlin wall began its party monopoly, putting on T (as in the last name trump) instead of M, and lost.

On this trip, Luz learned that participated in the conference, the Russians often cited the example of the Congress of Vienna (1815) at the end of the Napoleonic wars, and Putin has called the fall of the Berlin wall “the greatest geopolitical tragedy of the twentieth century.” In short, the result of enormous experience, “the retreat of Western liberalism” was the fact that it was necessary to perform with a clear mind and a sense of confusion, with the result that there was a book of 200 pages.

The author belongs to a family of people who seek how to understand what had happened. It is not a trivial bore, and a clever interpreter of American and Western society, possessing all necessary knowledge. He does have a question, and he’s looking for answers. He is interested in the reasons for the increase in the number of suicides, growth of consumption of opiates among people who are sidelined by life free the globalization of markets, and among the forgotten, which Donald deprive of health insurance, as well as large-scale deregulation under the leadership of wall Street and a bunch of other stuff, including glimpses of hypothetical protectionism that will soon force all to remember the great promise to put an end to the “American massacre,” destroying the white man (not Mexican), “First America.”

I will finish reading this book in the belief that there found a bunch of interesting things, but people tend to simplify, I always thought: it is easier to achieve understanding, if the study and sociology is preceded by a thesis before the statement of the facts. Not alternative facts has become the new political correctness of our pseudoparasitism time, and just the facts.

Liberalism (and today politically and historically we can talk about is liberalism, which appeared due to the revolution of Thatcher and Reagan) began his retreat, when we (you, they) have become ashamed of the capture of Baghdad and the execution of Saddam. When we began to afford a weakness of the rhetoric of inequality and victimization of the middle class in the West. When liberalism, on the one hand, he discovered his helplessness, the lack of a General political statements (e.g., the second speech of George W. Bush on the occasion of the inauguration of the mandate 2004-2008), and on the other — I forgot what a billion devotees of the forgotten people of the third world threatened by extreme poverty.

It had to be explained, and that price was not as high as they say or as they want to present. When we are lost in the censorship of human and humanitarian action, perceived idiotic theory of individual rights, no liberal (not to talk about women in locker rooms, piss where is your heart telling you, Shakespeare was machista, the main thing — to love each other, tenderness is the responsibility). Thus, the result of all this is trump, a wave of nationalism and rudeness, even in Europe, that only one Lord God can save us, but I hope they will not suffice.

Not only Machiavelli said that “lived Athens and Sparta a thousand years armed and enjoyed complete freedom,” all right, Secretary Florence was poluprecnik in a real city. But Plato, reflects on the ideal city, thought that the head should be kings, philosophers and guardians, which is almost entirely devoted to his treatise on the Republic. The ruling classes and those are the guards, or they should be. They are culture, education, virtues, that is, by force and arms, maintain a more or less rational order of the internal and external condition of the States, and if so and the markets, given the common interest, systematically coincide with the private interest of some individuals, emerging and disintegrating in the structure of signs and values, which in General can not be separated from religion, understood as the relationship between people and their aspiration to freedom, called, including, God. Liberalism without weapons, banners and God clashes with the Kingdom power, which is expressed in the forced standardization of language and culture — the two concepts are not incompatible with the network, which is understood as a trap.

We may analyze the progress of automation technology, the merciless logic of development, competition and rivalry, which in the coming decades will inevitably contribute to the emergence of social victims. Perhaps we asked the question and got part of the answer. But liberalism, at least for those who never ideologically accepted him in their fatal consequences, as well as for those who think it enlightened and beneficial at the height of the low-fallen era (in the words of Baron Compagnia) pragmatism, that is, measurement without alternatives, except those that will only get worse, might again be resurrected, perhaps not reaching the previous heights, if he will regain his custody.

But not only among conservatives. Democrat Madeleine Albright (Madeleine Albright), the Secretary of state under bill Clinton, participated in the settlement of the conflict in the Balkans, spoken of as Luz recalls that the word multilateralism has too many syllables and it ends in —ISM. So. With trump and the European nationalisms and rudeness multilateralism becomes regressive at the Congress of Vienna where Metternich is not even able to restore order in the world chaos, if only not to trust Putin, that I, frankly, appears with all due respect improvident step.