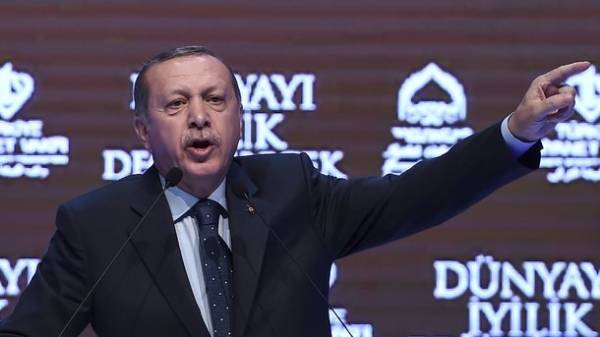 Turkish President Recep Tayyip Erdogan has threatened to terminate the agreement on migration with the European Union.

As reports BBC Ukraine, he said that the EU “can forget” that Turkey had agreed to the readmission of migrants who are unable to obtain refugee status in the EU.

According to the agreement signed in March 2016, migrants who arrive in Greece and Bulgaria, which are part of the EU, sent back to Turkey, provided that they have not requested asylum or their application was rejected.

“Now they are talking about readmission. What is readmission? Forget about it,” said today the Turkish President.

“You didn’t let my Minister to the Netherlands. You took the right landing my Minister of foreign Affairs. You do not allow us to hold meetings near the building of the Consulate General, which is my land. But then you expect us to do it (to take back migrants). This will not happen”, – he added.

Erdogan’s statement came amid a diplomatic row between the EU and Turkey that erupted on Saturday, when the Dutch authorities did not allow two Turkish Ministers, the first Minister of foreign Affairs of Turkey Mevlut Cavusoglu, and later Minister for family Affairs and social policies of Turkey, Fatima Betul saillant Kaye – act in Rotterdam in front of the Turkish citizens who live in the Netherlands.

Turkish officials were going to convince their fellow citizens to support changes in the Constitution of Turkey, which significantly expands the powers of the President. A referendum on the issue scheduled for April 16.

The Dutch authorities did not allow the Chairman to enter the country, and Fatima Betul saillant Kaye escortoly to the German border. The Dutch government explained the ban on holding the rally for security reasons.

Earlier, the authorities of Austria, Germany and Switzerland also banned the statements of the Turkish officials, citing possible problems for security.

Then, Erdogan compared the Netherlands with the “banana Republic”, and demanded from international organizations to enter sanctions against the country and accused the West of Islamophobia. “I said that Nazism is gone, but I was wrong, Nazism is alive in the West,” he said.