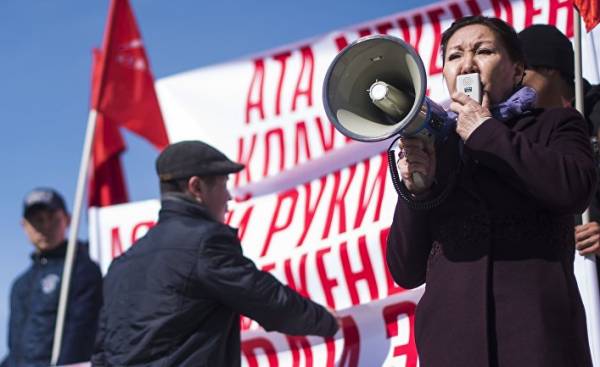 A few days after the arrest of a prominent opposition politician in Kyrgyzstan, the US state Department responded to journalistic inquiry with a cautious statement. “Please contact us for more details about this case to the government of the Kyrgyz Republic”, — noted in a statement to Radio Liberty/Radio Free Europe.

The document was very short, but his tone, perhaps it says a lot about the future of the human rights agenda of Washington during the administration of President Donald trump. The change in tone was not lost on the authorities of the countries of Central Asia, especially considering that, for example, Turkmenistan and Uzbekistan are among the worst offenders in the world of political and religious freedoms.

Another signal was filed in early March, when U.S. Secretary of state Rex Tillerson has decided not to participate in organized by the Ministry of defence of the presentation of the annual report on the state of human rights in different countries of the world. His decision was criticized even by some members of Congress from the Republican party. “For the first time in a very long time, the state Department report on human rights will present not the Secretary of state. I hope they change their mind,” wrote on Twitter, the Senator from Florida, Marco Rubio.

International Human rights organization Human Rights Watch has expressed more categorically. “The absence of the Secretary of state Tillerson at the presentation of the annual state Department report on human rights further shows to governments, human rights activists and endangered minorities that the state Department might turn a blind eye to the repression, violations and exploitation,” — said in published on March 3, the statement of Sarah Margon, the Washington Director of the mission of the organization.

As noted in the report of the state Department, in Central Asia the government is not very considered with the rights and freedoms of citizens. In the annual reports, the authors try to avoid open assessments regarding the trajectory of development of the situation in specific countries — i.e., the situation is improving or getting worse — but the number got into the reports of violations in itself speaks volumes.

In each of the countries of the region has developed its own tangle of problems in the field of human rights, and forced to be distracted by other things and suffer from underfunding the state Department may not have resources to deal with them.

Protection of human rights around the world in the interests of the United States, and if Washington is not going to guard those interests, this will lead to the strengthening of authoritarian regimes. Not paying sufficient attention to this region now, the U.S. may create a problem for the future, well-known Uzbek human rights activist Surat Ikramov.

“For the countries of Central Asia, and Uzbekistan, the consequences will be significant. This strengthening dictatorial regimes, the growth of corruption, the deterioration of the living standards of the population and rising emigration,” said Ikramov.

Especially the problem for American diplomats country in the region is Tajikistan, as it is driven by a weak autocrat. Washington adhered to here of course, strongly emphasized the security sector, given the presence of this state is long and poorly guarded border with Afghanistan. As a result, diplomats almost did not make any statements regarding the intensification of repression against opposition politics and independent journalists. Repression in Tajikistan was intensified from September 2015, when, according to local authorities, there was a coup attempt.

Some time ago a longtime loyal ally of the President of Tajikistan was unexpectedly ousted as the mayor of Dushanbe and found themselves at the mercy of the local Prosecutor’s office. The U.S. Embassy did not make public statements about this, although Ambassador Elizabeth Millard met March 7 with the new head of the city administration Rustam Emomali, son of Tajik President.

In Kyrgyzstan, the main objective is the restoration of relations, soured after adopted by the state Department in mid-2015, the decision to present the award in the sphere of protection of the human rights of imprisoned Uzbek activist. Bishkek took this step as a hostile gesture. The problem of observance of human rights in General is a major irritant in Kyrgyz-American relations.

According to some observers, if we forget about human rights — or at least push them to the side — the chances of recovery of bilateral relations will grow immediately. But such a decision will not pass without consequences, as it will undermine the US image as a champion of justice.

Fatima Yakupbaeva, Kyrgyz lawyer, often representing in court the interests of victims of human rights violations, adhere to optimistic positions. “Trump is a patriot of his country. Accordingly, he will maintain the policies as beneficial only to the United States,” she said.

If distracted for a moment from human rights, many experts are not yet able to determine which generally will be U.S. policy towards Central Asia. Speaking at a recent conference at the George Washington University, Roger Kangas, expert on Central Asia, national defense University, said that it was still too early to talk about what will make the focus of American diplomats during the administration of the trump.

“At the State Department, the defense Department and some other departments, many posts remain vacant, he said. — On the [Central Asia] is not paying any attention… No real discussion about the region was conducted, except, perhaps, very modest measures in support of countering violent extremism.”

According to the forecast of Cangas, because of the General attitude of the tramp to life and business, U.S. relations with the Central Asian States can begin to be built not on fundamentals, but on the basis of haggling over narrow and specific issues. In this scenario security issues are likely to be the main priority.

Given trump statements about reducing funding for the state Department — that would mean a reduction in assistance programmes, in which in Central Asia over the past decade have invested hundreds of millions of dollars — Washington may be deprived of financial “carrot” which could be used to convince the Central Asian partners to adhere to American priorities.

“If I, say, Central Asian leader or official business… what USA can offer me?” said Kangas.