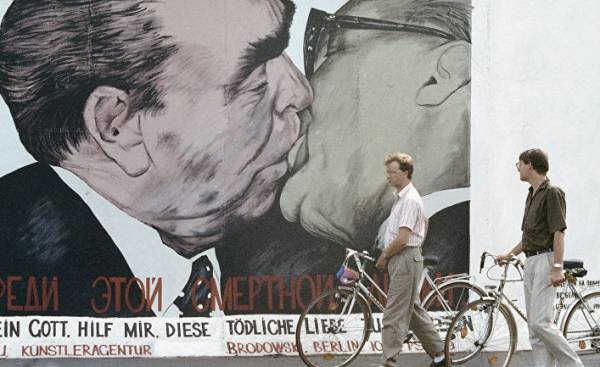 Every Berlin tourist knows the story. This is probably the most photographed wall mural East Side Gallery on the banks of the spree: namely, Brezhnev and Honecker, absorbed the socialist kiss. Painted by Russian artist Dmitri Vrubel. His work is world famous, and he Vrubel?

He came to Berlin in 1990, a year after the fall of the GDR. The Soviet Union also was on the verge of collapse, Russian artists sought out West, looking for exhibition halls. Dmitry Vrubel did not go to art galleries in West Berlin. He went to the Berlin wall.

In this place of decline and recovery has gathered artists from around the world. They painted the dead concrete of his paintings, which were dedicated to peace, love, freedom and democracy. Vrubel, on the contrary, just copied a postcard, a photo of a real boss.. French (Régis Bossu), which was a picture of Erich Honecker and Leonid Brezhnev in 1979 on the 30th anniversary of the GDR. Two older men, on the occasion of the most powerful in the Eastern bloc, eyes closed, lips gently pressed against each other. Under his picture on the wall Vrubel also signed commentary: “o my Lord! Help me to survive among this mortal love”. It is necessary to understand?

Dmitry Vrubel takes us to Berlin, he currently with his wife Victoria Timofeeva runs his own gallery in the Kulturbrauerei (“Cultureware”) in Prenzlauer Berg. What he wanted to say in his most famous work? “Fraternal kiss” on the Berlin wall is much more than just a picture of the socialist gesture, says Wrobel. He thoroughly examines the historical documents not only in the context of their origin, but tries to reveal in them the universal truths.

“That kiss may be dedicated to eternal love. Now it’s not two drunken idiots that hug at the end of the party activities”. Vrubel loves irony and pathos — life, death and love, we’re talking about it. And that’s probably what makes his story so popular. After the collapse of the socialist system “fraternal kiss” suddenly received a new value. A mockery of the East German elite, the defense of homosexual love — any interpretation was possible and permissible.

Meanwhile, the “brotherly kiss” Vrubel appeared on shirts, magnets for refrigerators and jute bags. He could become a millionaire. However, all of such products do not bring them a dime. He is not interested in.

Dmitry Vrubel rare upper teeth, smiling as the young homeless, whose paintings hang behind the reception Desk of the gallery. In one of the many small courtyards of the Kulturbrauerei hiding workshop Dmitry Vrubel and Victoria Timofeeva, “БruderKunst”. They are a team for 22 years. On Sundays they open the heavy metal door of the workshop to visitors. Here both artists exhibit their photo-realistic series of paintings, which were written under the project title “Tolstoyevsky” (Tolstoewski).

Tolstoy and Dostoevsky — the pillars of Russian literature. The idea to create modern illustrations for the works of these classics came Vrubel and Timofeeva few years ago. In “Crime and punishment” Dostoevsky describes the following scene: drunk bureaucrat Marmeladov meets in one of the taverns of Saint Petersburg, the murderer Raskolnikov. Dostoevsky manages to describe these two outsiders, their fate is in the highest degree shocking the reader, says Wrobel.

And just want to do it and his partner. They are looking for personal photos on the Internet and make rubbings of them, faithful to the original. Their art is to give ordinary high value. Drinking vodka men play Topless women laughing. Ukrainian MPs fight over the bill. Family in lingerie is photographed while cooking food on the grill. “We take fotoalbomy, workers, who are photographed with a prostitute. Like Dostoevsky we are releasing the images of the situation. And suddenly changes the meaning.”

Most Vrubel and Timofeev interested in simple, marginal people. In his current exhibition “Das Finale” they show the audience the semi-finals of the football European championship 2016. Germany is playing against France and, for the first time in more than 50 years, is the loser and humiliating surprise for the German fans. Horror frozen on the faces of the audience. A young girl terrified. A grown woman squeezes black-red-gold plush toy. The Central story of the exhibition depicts four men in orange jumpsuits. They are ex — players of the Syrian national football team and expect at any moment of his execution at the hands of Islamic terrorists in raqqa. The Islamists think football is a sin and has appointed the penalty at the time of the final of the European championship.

In “Das Finale” near death and hope for a goal opposed to each other absurd simultaneity. Pain fans need to show his relative face stiff terror. “This is absurd, — said Dmitry and Victoria. — Strong feelings of the German fans had, in fact, be caused really significant events.” Football and terror for Vrubel and Timofeeva, like “War and peace”. Deep feelings and great despair be here as close to each other as the perception of the old Prince Bolkonsky in Tolstoy’s masterpiece. They both don’t have anything against football, besides, they are fans.

Method of approach the project “Tolstoyevsky” very close “Brotherly kiss” by Vrubel: we are not talking about a specific moment, not about the specific people who fill it, but of human universals, which do not lose their value over time.

“We’re just trying to show you how to feel, — said Timofeeva. — I think that sometimes it is necessary to stop to get a feel for the world. To make it better.” 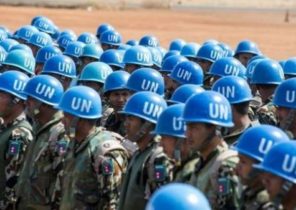