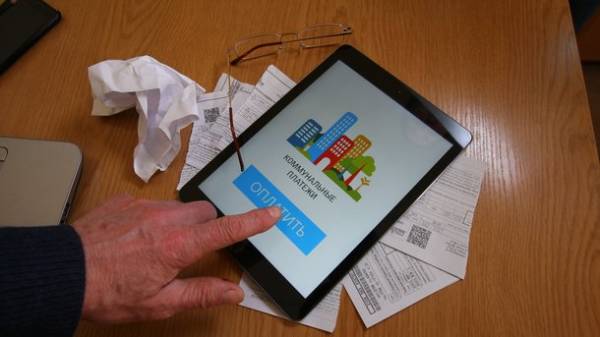 Ukrainians prepare a single electronic system of simplified payment. This initiative was made by the national Bank. The concept began to develop last year, it is expected that the system will fully start working by the end of 2020. “Today” has found how it is beneficial for the people and what could be the pitfalls.

THE ESSENCE OF INNOVATION. As explained by the project Manager Yuliya Lyakh, with the introduction of e-payment system komuslug scheme Direct debit, the share of cash in the economy will decrease from 13.4% to 9.5%, which is hundreds of billions of cash that will not have to carry and count, wasting time and resources. In Europe, this e-system very common: for example, in the UK, with its help, paid 73% of utility accounts in the Netherlands — 45%. We have it working in some banks, but while the majority pay for komuslugi the old fashioned way — in cash. For the implementation of e-system across the country requires close cooperation of the national Bank with the Ministry of economic development, Ministry of regional development and housing, commercial banks and suppliers komuslug, which, according to the Telegraph, started.

First of all it is necessary to develop a common form of e-receipts for payment komuslug. Then the scheme of calculations is reduced to a minimum: the service provider generates payment order and sends to the Bank, where his client-user account. The Bank notifies the customer (via SMS or e-mail) that for komuslugi he needs this month so much and asked to allow money withdrawals from the account. If the customer confirms the payment, the money is debited.
The advantages of this method for the citizen — the opportunity to pay for the “communal” around the clock, any day of the week, without Queuing, filling out receipts. It is expected that the Commission for their work the banks will not take. So you can pay not only utility services, but the Internet, TV, to repay the loans.

It is obvious that service is possible only if the client has any account in the Bank. But at least one card are now virtually all, such as salary or pension.

EXPERTS. Finance experts carefully assess the innovation. So, independent banking expert Igor Shevchenko calls this excessive centralization, and its implementation is costly. “Such online services and personal accounts on the websites of the service providers act for a long time, and people rely heavily on them. Time saving is unlikely to be: received an SMS that I must pay for utility services so much, most will still want to check that the money taken”, — said Shevchenko.

The President Ukranalittsentra Alexander Ohrimenko: “This will make life easier as the elderly who will not have to manually record the readings and to stand in queues and versenate young people. It is easy to read the message and send the confirmation of payment. Also will increase the payment discipline of customers and reduce the costs of banks for collection of cash. But we need a program of training and assistance for the elderly”.

PEOPLE. The opinions of ordinary people were divided: the active users of Bank cards and modern gadgets are definitely over, and those who use them little, at best perceive a novelty only with difficulty. “The main future audience is retirees who don’t have a credit card, so paying the bills. When paying by card they can get into overdraft, and the Bank will start charging interest on the loan, in the end, instead of the benefits people will receive damages,” worries a 40-year-old Andrey Polyakov. But the 28-year-old entrepreneur Irina Kravchenko agrees: “I Have debts for the communal services, as due to work no time to stand in queues and fill accounts. If it is really possible to pay with one touch, I support it.”

What is a DIRECT DEBIT. Method of payment Direct Debit (direct debit) is widely distributed in Western countries, where cash settlements significantly less than credit cards. Its essence is that creditors can deduct money from accounts of Bank clients, provided that the customer (payer) the Bank formed the payment order, stipulating the terms and conditions of payment of the invoice.