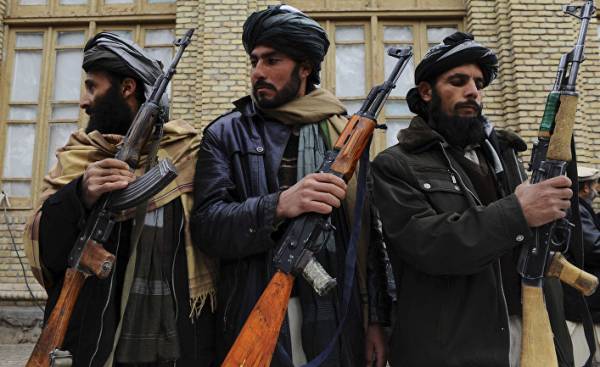 Over the past few months Russia is back in “the game” in Afghanistan. She intervened in the Affairs of the Taliban (banned in Russia — approx. ed.), arguing that the military presence of the West headed by the United States of America in this country has not produced any results. In turn, Afghanistan is still faced with the consequences of the withdrawal of us troops.

In the mid-eighties of the twentieth century, Afghanistan was recognized as the “bleeding wound” of the Soviet Union, and by the end of this decade, many have compared it to Vietnam, from which Russia was left defeated.

In December last year was held the first conference on Afghanistan, and last month we had another meeting in Moscow, in which participated Russia, Iran, Afghanistan, India and China. It should be noted that the United States has not received an invitation to participate in it.

The renewal of Russian influence in Afghanistan consistent with the General trends of Russian foreign policy in the region. Moscow aims to become a mediator in the conclusion of agreements with the aim of expanding its geopolitical influence. She attempts to prepare a peace agreement on Afghanistan, thereby to take the place of the United States of America, as defender of Afghanistan, and to offer his candidacy for the role of principal mediator in South Asia.

Moscow wants to use its influence in the region thus, to prevent the expansion of terrorism and drug shipments.

Russia demands the withdrawal of US troops from Central Asia, but at that time aware that any hasty action would lead to chaos and anarchy in Afghanistan, which could, in turn, jeopardize her position, and the position of the neighboring countries.

The fears of Moscow down to two things. First, the situation in Afghanistan is unstable, so it can be the appropriate place for the spread of terrorism. Secondly, Moscow fears the resumption of the supply of heroin in Russia and Central Asia. According to the UN, Russia has seen the world’s highest rates of consumption of heroin. The use of such substances leads to death by overdose and the spread of HIV infection.

In 2013, Moscow was considered the Taliban’s main source of these problems. Moreover, Russia expressed its doubts about the effectiveness of negotiations, the U.S. representatives of this movement in Qatar. This year representatives of the Taliban and Russia, along with delegates from other Central Asian countries began their first appointment.

A Western diplomat says: “We have to consider Russia’s return to Afghanistan in the context of its protracted intervention in Syria and its geopolitical aspirations and ambitions in the middle East. Moreover, Russia’s involvement in the Syrian conflict made her a target for Islamic extremists spreading their networks in Afghanistan.” He added: “it Seems that Russia wants to use the rivalry between ISIS (banned in Russia — approx.ed.) and the Taliban, with the goal of phased move of ISIL on the territory of Afghanistan.”

In December 2016, the Russian Ambassador to Afghanistan Zamir Kabulov said, “We are worried that ISIS threatens both Afghanistan and all Central Asian countries: Pakistan, Iran, China, India and even Russia. We support stable relations with the Taliban in order to provide security to political offices and consulates in Central Asia”.

In turn, in February 2016, the representative of Afghanistan at the Central command of the armed forces of the United States Ahmad Murid Barto (Ahmad Murid Partaw) in his article in Foreign Policy “the False story about the existence of ISIS in Afghanistan,” expressed a completely opposite opinion. He is convinced that Russia, China, Iran exaggerating when talking about ISIS in Afghanistan in order to freely interfere in the internal Affairs of the country, and in order to counter the growing US influence in the region.”

Moscow is clearly aware that the international intervention led by the United States in Afghanistan has failed to ensure stability and development. Russian Ambassador to Kabul claims that the U.S. for 15 years and wasted trillion of dollars. Prolonged presence of U.S. (thousands of soldiers and finally signed with Kabul an agreement on bilateral security) demonstrates the great desire of the country to maintain a “foothold” in Central Asia, especially considering the fact that in 1979, the country lost the support of Iran, and it led to the expulsion of American troops from Central Asia.

Moscow believes that the Taliban, most of whom are representatives of the people Pashto, less contrary to the interests of the country in the long term. Russia also believes that it movement confirmed its stable position over the past two decades. The Taliban differs from such extremist groups as ISIS or al-Qaeda, the target of which are the West and Russia. Moscow has not lost sight of various branches of the Taliban, for example grouping “Haqqani”. However, Russia believes that the time has come of the Taliban in the new Afghan policy. His interests intersect with the interests of Moscow, which wants to put an end to the military presence of America in Afghanistan. So, the former leader of the Taliban living in Kabul and those Islamic rule in Afghanistan, Mohammad Akbar Agha said that the Taliban is interested in closer ties with Moscow in order to end the disasters that bring the country USA. On the 13th of last month in an interview with the newspaper “Moscow time” he added: “We are ready to “handshake” with Russia in order to get rid of US. History shows that we have more in common with Russia and the former republics of the Soviet Union than with Europe.”

The Afghan government and Washington are unable to eliminate Taliban or to achieve stability in the region, that is why Moscow’s plans to prevent the spread of terrorists are the best way to protect its borders and the borders of the allies in Central Asia. Russia supports the strengthening of the Taliban in the pursuit of political power, and believes that financial aid and military support can stimulate and encourage the Taliban to confront the real threat, namely, any extremists crossing the border. According to Moscow, the increased pressure on the Taliban government of Afghanistan will lead to the withdrawal of us troops from the country, which is Russia’s aim.

It is obvious that the interests of Russia and the Taliban on the issue of ISIS in Afghanistan and the US military presence are the same. Moreover, Iran and China support their aspirations and desires, that as Afghan regular troops continue to resist the Taliban, terrorism which has increased markedly in different parts of the region. An example is the murder of the Ambassador of the United Arab Emirates in Afghanistan, and the Governor of Kandahar province.

Noteworthy is the fact that currently in Afghanistan are constantly taking place some events. There is evidence that the Chinese ground troops are in Afghanistan and carried out jointly with Afghan forces patrolling along the perimeter line common border with a length of 50 miles. The purpose of this patrol is the capture of Uyghur militants returning from Mosul and Raqqa. In addition, there is the assumption that “after the departure of US and NATO” China is ready to play a more prominent role in stabilizing the situation in Afghanistan. Still impossible to say exactly to what extent China wants to participate in the resolution of conflicts in the country. It should be noted that the Ministry of defense refuses to even discuss the issue. Thus, the press Secretary said Monday: “We know that Chinese troops there [in Afghanistan]!”

The Taliban is not interested in peace and security. His goal is to win the war in Afghanistan, so it is ready to derive any benefit from negotiations with regional and international forces to improve their situation. Of course, the Taliban are not ready to abandon its terrorist activities, and this means that Moscow will not be able to reconcile Kabul and the Taliban. In addition, memories of military invasion of the Soviet Union in Afghanistan still sit deep in the minds of the Afghan people, therefore, it is unlikely that Moscow will have a chance to achieve their ambitions and success in the whole country, until the United States maintains its military presence in Afghanistan.