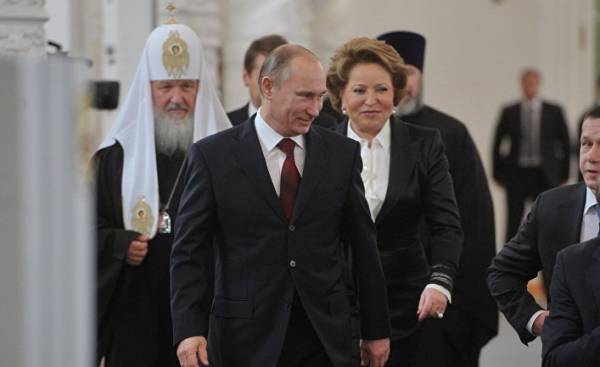 March 8 is considered to be “international women’s day”, although it is celebrated mostly only in the countries of the former Soviet Union. Many in Estonia the habit of celebrating it, although it is no longer official. It was replaced by mother’s Day, celebrated in many countries on the second Sunday of may.

However, in Russia on March 8 continues to be a public holiday and is widely celebrated. Although he had been has no ideological meaning of the struggle for the social rights of women, which was associated with this date in the early twentieth century. Today it is gender-specific holiday when men give women the first spring flowers.

At first glance, the Russian authorities women occupy a fairly high place. For example, the speaker of the Federation Council (the upper house of the Russian Parliament) is Valentina Matviyenko, Russia’s Central Bank is headed by Elvira Nabiullina.

But if you listen to the statements of Russian women politicians, you will notice that many of them take a very conservative position, rejecting the European values of freedom and equality.

For example, Vice-speaker of the State Duma Irina Yarovaya gained fame as the author of a number of repressive laws toughening rules of holding rallies, on the protection of the “historical memory”, which effectively made the Soviet version of history the only legal in Russia on “foreign agents”, which now should be called all non-profit organizations cooperating with foreign partners.

But the greatest resonance was caused by its act of 2016, which ordered ISPs and mobile operators to store all data sent by users within 3 years and report them to the FSB, under the pretext of “fighting extremism and terrorism.”

Another well-known Russian industry, Deputy of the state Duma and subsequently the Federation Council member Elena Mizulina is “famous” is no less controversial legislation — for example, banning adoption of Russian orphans by US citizens, the fight against abortion, “gay propaganda”, etc.

Loud statements of these two persons create the impression that Russian women politicians traditionally adhere to an archaic and repressive attitudes and tend to oppose their country Europe. However, this is misleading. The most famous Russian Empress Catherine II, who ruled from 1762 to 1796, on the contrary, highly progressive views by the standards of his time and sought to Europeanization of Russia.

But this, of course, a completely different era. Although in post-Soviet Russia of the 1990-ies was also starting to develop the type of independent and strong-willed business-woman (its outstanding representative was Irina Khakamada), but later he got mass continue. Since 2000 years, under Putin, has developed a completely opposite trend in females (with the exception of a narrow layer of show business) has become fashionable “not stand out”. And by the way — the marital status of the Russian President in fact classified, it is impossible to imagine in European countries, where public policy is not secret about that.

It is possible to trace a definite correlation — the more “Patriotic” became the Russian propaganda, the more closed and conservative was made the way Russian women what she wants to see the state. And today, this perfect image is almost fully corresponds to the slogan “Kinder, Küche, Kirche” (children, kitchen, Church), adopted in Nazi Germany, despite the fact that official Russia likes to loudly declare their “anti-fascism”.

The average Russian woman typically earns less than men, often never been abroad (the passport has only 28% of Russians), did not consider the situation in the country is perfect, but consistently vote for the current government. What is a mystery?

Russian propaganda of the era of “hybrid war”, ignoring the facts, prudently puts pressure on the emotions of its consumers. And because of the emotional sphere in women is more developed than men’s, they are the main victims of this propaganda. Information fakes like “the crucified boy in Donetsk” or “the moral crisis in Europe” cause Russian women acute reaction that turns absolute trust in their own government. The philosopher Nikolai Berdyaev noticed this phenomenon over 100 years ago, calling it “forever Babi in the Russian soul”. “Female” humility of people like complements and justifies “male”, the Imperial policy of the authorities.

Of course, not all Russian women fit this stereotype and susceptible to state propaganda. But so to state, they become dangerous. You can recall the high-profile murders of the most courageous and free women in Russian politics and journalism — Galina Starovoitova, Anna Politkovskaya… In 2014, untimely died Valeria Novodvorskaya — a well-known dissident and the brightest critic of the Putin regime.

Today these figures in the Russian opposition, no. In many ways, so the women win in the presidential election next year, it is impossible to imagine. And in this sense Russia is still very far from Estonia.