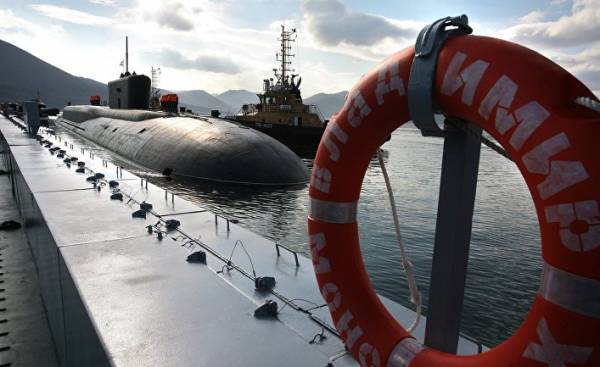 30 years after the last Soviet leader has proposed to make Northern Europe a nuclear-free zone, “doomsday clock” is moved for half a minute closer to midnight.

Many countries have a nuclear weapon, arming. Almost 1.8 thousand American, Russian, British and French warheads can be quickly activated in the event of war. Now, according to the Bulletin of Atomic Scientists, the danger of nuclear war and other global catastrophes are almost as great as in the days of the cold war in the 1950-ies.

“However, almost 30 years ago, when Mikhail Gorbachev, helping to end the cold war with perestroika and glasnost, said in Murmansk on his vision of the situation in the future, it does not mean the territory in which is located the most important naval base” — explains senior researcher Christian Otland (Kristian Åtland) from the research Institute of the armed forces of Norway (FFI).

“A new arms race in the North junk. I think that Russia not want it. However, we must recognize that the strategic landscape in the North has changed, and military-strategic role in the region has increased. And the nuclear dimension in the North is unlikely to become less important in the future,” says Odland in an interview with TV2.

After the end of the cold war on the Russian side was less than strategic weapons, sea-based, but in recent years the situation has changed. Now the Russians are building more submarines and missiles are equipped with a large number of nuclear warheads.

“The development of technology leads to the fact that for each rocket now have more nuclear warheads. This means that the total number of warheads increases. The newest submarine class “Northwind” can also carry more missiles than the three boats that released today (20 compared to 16 missiles on the boat),” says the scientist.

Strategic submarines of class “Borey” (according to NATO classification class submarine “Dolgoruky”) are placed in gadzhiyevo, 120 kilometers from the border with Norway. In the mid 1990-ies the database of the Navy for failure to pay the electricity would shut off, but in recent years there is an arms build-up.

According to researchers from FFI, we now have Russian on the Kola Peninsula more than 400 nuclear warheads.

“The first of the submarines of “Borey”, which is called “Yury Dolgoruky”, the Northern fleet received in January 2013, it is used from its base registry in gadzhiyevo on the Western side of the Murmansk fjord. There are also six strategic submarines of class “Delta IV”, built in the period 1985-1992 years. With the full equipment of these submarines in total may have on Board more than 100 ballistic missiles. Each rocket is equipped with four or six warheads, so we can talk about more than 400 nuclear warheads only on the Kola Peninsula,” says Odland in an interview with TV2.

In recent years, Russia has spent billions on the modernization and creation of new modern weapons systems. One of its goals is the ability to control the Barents sea in the event of a crisis situation.

Russian plans to build more submarines of the “Borey”, the length of which is 170 meters and which are today the cornerstone of Russia’s nuclear deterrence strategy.

“In addition to eight new submarines of class “Northwind”, which was originally included in the state armaments program for the period until 2020, we are talking about the construction of four more after 2020, so a total of 12 strategic submarines. In all likelihood, these boats would be more or less equally distributed between the Northern and black sea fleets. New submarine more modern, more silent, plus they are better armed than the boats that they are replacing. However, there is some uncertainty in the financing of Russian projects related to the construction of submarines, in particular, and due to the current economic situation in the country”, — says the researcher from FFI.

“Russia strengthens the presence of”

“In 2016, the Minister of defence of Russia reported arms build-up on the bases, where the Russian nuclear submarine. The goal of a Russia — 100% upgrade strategic nuclear weapons of the country until 2020. Such weapons as an important element of deterrence, and the Arctic, including the Barents sea and the Arctic ocean is an important area of action for nuclear naval forces — unlike Antarctica, which is in accordance with the Treaty on Antarctica is a demilitarized zone and so free from nuclear weapons,” explains Odland.

“The Kola Peninsula — like base of the Russian strategic forces is in a special situation. He was and remains the center of gravity of the conventional naval forces of Russia. In addition, in the North-Western edge of the country, there are also significant air force and the defense forces and marine corps units and just infantry. In recent years they have undergone substantial modernization, they increasingly take part in military exercises in all areas,” says Atland.

“New Russian weapons systems have more range and are more accurate than the old system. And the new submarines that have either been built or are being built, more silent than those of the submarine, which they are replacing,” says Christian Otland in an interview with TV 2.

The growing military activity of Russia in the Barents sea affects the Norwegian fishermen. Test launches of Russian nuclear submarines became part of everyday life in those parts of Norway in the North, which is situated near Russia.

“The Barents sea plays a particularly important role as an area for training exercises, operational activities, and transit for submarines and surface ships of the Northern fleet. The current world situation characterized by tensions between Russia and the West and between Russia and NATO, says that Russia in the future will continue to strengthen its military presence in the region. The increasing economic importance of the Northern territories to Russia as the arena of shipping, fisheries and oil and gas extraction, talking about the same”, — believes Otland.

Russia tops the list of powers possessing nuclear weapons, having 7300 nuclear warheads. Approximately 1800 of them have already been deployed. On the Kola Peninsula is concentrated about 60% of Russian strategic nuclear warheads sea-based.

“In the last decade, Russia has spent significant funds for the modernization of its nuclear forces, including strategic naval forces based on the Kola Peninsula and Kamchatka. The Northern fleet has traditionally given higher priority than the Pacific. The situation has not changed, though now the Pacific fleet last year and received two new submarines of class “Northwind”. Approximately 60% of Russian strategic nuclear warheads of sea-based concentrated on the Kola Peninsula, the remaining 40% on the Kamchatka Peninsula,” — says Otland.

“Strategic submarines of the Northern fleet regularly are in the trips and conduct exercises in the Barents sea and adjacent marine areas. The same can be said about nuclear combat submarines, including the newest submarine “Severodvinsk”, which was made available to the Northern fleet in December 2013. They operate from their base in the fjord Persons, about 50 km from the Norwegian-Russian border, and they often interact with strategic submarines,” — said Otland.

According to the intelligence Services, the nuclear submarine “extremely versatile” and can hit surface vessels, other submarines and targets onshore. The submarine has high-precision weapons, having on Board a cruise missile “Calibre”, the radius of which is approximately two thousand kilometers.

“Such submarines are equipped, in particular, cruise missiles, torpedoes and mines. In the report, Hans M. Kristensen (Hans M. Kristensen) and Robert S. Norris (Robert S. Norris) said that conventional cruise missiles of the “Caliber” can theoretically be fitted with nuclear warheads. The Treaty on further reduction and limitation of strategic offensive arms talking about non-strategic nuclear weapons is not, so reporting it is optional. Russia itself says that all its non-strategic weapons warehoused centrally,” says Christian Otland.

In November it became known that Norway is going to buy a new reconnaissance aircraft worth 9.8 billion kroons. The P8A Poseidon aircraft Boeing created for anti-submarine warfare and for Maritime surveillance and electronic intelligence. New aircraft can be equipped with torpedoes, deep bombs and cruise missiles, if necessary, they can hit underwater targets.

The report of the intelligence Service that contains the threat assessment in 2017, says a new and improved capacity expand the space for activities in areas close to Norway. On the question of how such development will affect Norwegian interests and activities on land and offshore, senior researcher FFI says:

“The fact that the balance of military forces in the North were in favor of Russia, is in itself not news. So it was during the cold war. We must remember that the strategic naval forces on the Kola Peninsula — a national resource, which should take care of the security of the country as a whole. If to look from this perspective, Norway “does not match” the military capacities that exist on the Russian side of the border.”

“However, it is important that the NATO was a reliable potential for the protection of all parts of its territory, including border regions on the Northern flank of the Alliance. That increases the range and accuracy of the new Russian weapons systems onshore and offshore, makes this task difficult. Norway have a special responsibility to monitor the situation close to our Northern areas, including modernization of the armed forces which is conducted by Russia and the continued high military activity. In this context, geographical proximity to the zone of operations of the Russian forces is a great advantage.”