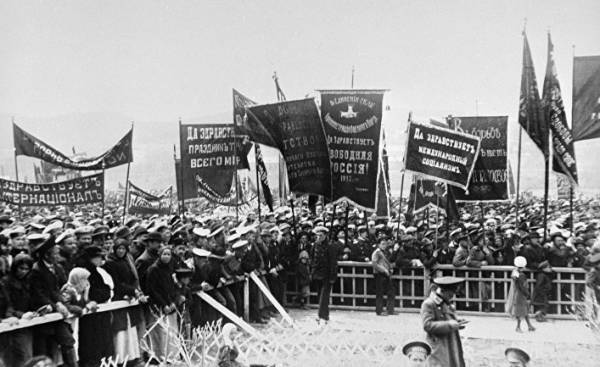 Russia is serious about anniversaries. Every year this country on a large scale mark their significant dates, organizing a spectacular celebration in honor of such events as the Soviet Union’s victory over Nazi Germany in world war II or the beginning of post-Soviet reforms in Russia. Soon the country will mark the centenary of the tumultuous events of 1917 and the Russian leaders put in a difficult position. A hundred years ago, March 15, 1917, Tsar Nicholas II abdicated the throne and thus ended the lasted more than 300 years of rule in Russia of the Romanov dynasty, and with it the existence of the Russian Empire.

At the end of the year Russia will also celebrate the 100 year anniversary of the devastating consequences of bread and hunger strikes of factory workers, the 100th anniversary of the October revolution and then the outbreak of the civil war, which lasted five years, as well as the beginning of the Soviet era. All these events bring to mind a period of uncertainty in the Russian history when the country and its people to the greatest extent, was divided. The question of how to celebrate these 100-year anniversary, proved difficult for the Kremlin.

The return of history

Russian leaders during the 25 years after the collapse of the Soviet Union often turned to his glory days. Emphasizing the strength and stability of the Soviet Union, as well as downplaying the importance of his darker periods, the Kremlin has enlisted the support of the population, appealing to their sense of national pride. Recently, however, the Russian leadership began to turn to earlier periods of Russia’s history to bolster its legitimacy. As the President Vladimir Putin is becoming increasingly authoritarian, the Kremlin actively engaged in the revival and romanticizing the various figures of the Russian tsarist past.

Putin, exposing insightful analysis of history, understands that his country faces the same issues that existed in previous periods of its history. The Russian economy is stagnating, most of the population is unhappy and hostile forces from approaching its borders. Given the number of former Soviet republics, faced with the riots and political unrest over the past two decades, the memory of what happened 100 years ago, the revolution is putting strong pressure on the Kremlin.

To the 100-year anniversary of the October revolution Alexei Uchitel, one of the most famous Russian filmmakers, he timed the release of their extravagant historical film, which tells about the love affair of Tsar Nicholas II with the ballet dancer Mathilde Kschessinska. The trailers of this film promises the audience a romance, focused to romanticize and humanize the image of the last Russian Tsar, and its background serve only the echoes of the revolution that would lead to his overthrow. Meanwhile, the Russian media reported that in the Crimea installed a bust of Tsar Nicholas II streaming myrrh, inviting thereby the citizens of Russia to visit Crimea and see this alleged wonder.

Some politicians try to present this phenomenon as a sign of consecration to the Lord the Russian annexation of Crimea is an event, according to a recent opinion polls, is the Russians have more pride than flying a man to the moon.

But now the Kremlin is concerned that the current wave of nostalgia about the Imperial period in history may spiral out of control. In fact, polls show that about a quarter of the population of Russia supports the restoration of the monarchy. And therefore, the Russian leadership once again came into the game in order to change the direction of the discussions. In December last year, Putin emphasized the need to appeal to “reason and nature” of the revolution (1917), not forgetting that “we are one people, we are one people”. The Kremlin also launched this year a campaign in the media, designed to reconcile different points of view on the events of 1917, and to show their relevance for modern Russia.

History of the revolution in tweets

State media giant TV channel RT (formerly known as Russia Today) also rocked the campaign on Twitter (#1917_Live) to recreate the events of 1917 in the style of the era of social media. According to one of the leaders of this project, using social networking was able to recall hundreds of important figures of the time — including the doomed Tsar, Vladimir Lenin, and Lev, Trikoo. Each of the historical figures got my own account, which is updated several times a day in order to reflect a snapshot of tweets chaotic events of 1917.

Employees of the TV channel RT in a separate account under the name of Russian Telegraph appropriately group all the tweets, and post there photos and newsreels of the time. This campaign will continue in 2018; the RT even plans to rebrand account Russian Telegraph and call it Revolutionary Times — after the anniversary of the October revolution.

This is to allow the Kremlin to shape public opinion regarding the events of that time without taking himself a position on this issue. By including in your media project of such a large number of historical figures, the Russian government covers the full set of views on events so important in the history of the year. The ongoing campaign allows participants to simultaneously bask in the lost aristocratic beauty, to empathize with dissatisfied workers and revolutionaries, and also to reflect on the trials and triumphs of the Soviet period.

After 100, after the revolution of 1917 campaign by the Kremlin aimed at reconciliation of Soviet and tsarist periods, evidence of internal contradictions of Russian history. The last Tsar of the Russian Empire, today revered as a Martyr, was an unpopular and ineffective ruler at the time. The Soviet system is presented as a utopia, was created in a bloody revolution. And today Russia is a powerful player on the global scene, while the situation in the country becomes more and more problematic. Noting the two sides in 1917, the Russian leadership probably hopes to eliminate those gaps that led to the fall of his predecessors.