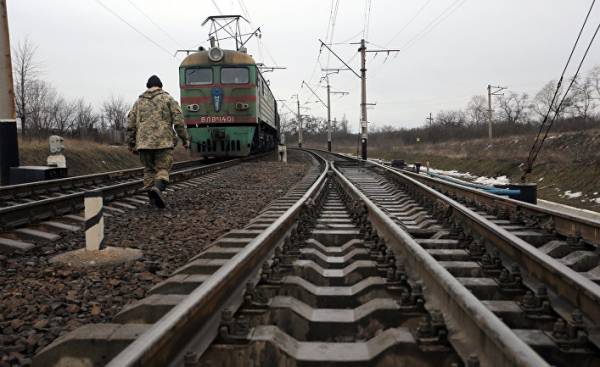 This is the first in a series of three articles about the arranged Ukrainian nationalists railway blockade. The first will be dedicated directly to this event, the second to focus on the oligarch Rinat Akhmetov (he now most to lose from the nationalization initiated DNR), and the third will attempt to highlight the differences between information and counter-propaganda.

March 4, extended to the Russian border railway blockade of Donbass was launched on 25 January 2017 by a group of 55 former soldiers of the battalions “Donbass” and “Dnepr”. Among them were four deputies of the Verkhovna Rada. First of all it is semen Semenchenko (real name Konstantin Grishin), who was born in Sevastopol, and then became a businessman in Donetsk, where he led the satellite company. Since the beginning of the “revolution of dignity” he gained notorious as the commander of the battalion “Donbass”. In 2014 he became a member of Parliament as part of the party “Samopomich”. Two of the remaining three — Taras Pastukh and Pavlo Kostenko, Deputy “Self-help” from Ternopil and Lviv. Last, Vladimir Parasyuk, was one of the leaders of the Maidan, and then the commanders of the battalion “Dnepr”. In 2014 he was elected a member of Parliament from Lviv region.

The first observation concerns the origin staged a blockade of the extremists. They all come from battalions “Donbass” and “Dnepr”, which was funded by Igor Kolomoisky. All four members represent Galicia (Lviv and Ternopil), and three members of the party “Self-help”, one of the sponsors which again is Kolomoisky. It was created in Lviv in 2012 the movement is represented in Parliament of 33 deputies, making it the third largest Ukrainian party. Its ideology implies a distribution of “Christian morality and mutual aid,” rural development and the unity of Ukraine. Contrary to the last statement, members of the party are now with the exception of the separatist republics, which is considered the “Trojan horse of Russia”. Its members and the Donbass share three things: geography, culture and religion.

Although in France about your game few people have heard, this does not mean that it does nothing. It presses on his “Christian democratic” side, pushing into the shadows segregationists policy. In particular it establishes a connection with the “Democratic movement”, the Catholic community, as well as Radio Courtoisie through LaSalle Pascal (Pascal Lasalle).

The most surprising thing in the whole situation is that none of the French media are not interested in the identity of the 55 “blockers” that create a threat to the Ukrainian economy. A Google search for the party “Samopomich” will not give you any articles in the French language. Pretty sad result for a country with 12 national Newspapers, 46 regional editions and 35 328 journalists. She hasn’t been heard even in La Croix, which produced not outstanding, objective article on the role of Greek Catholics in the civil war in the East of the country in the midst of crisis (12.02.2014).

Now, when we know that the siege was the work of Greek Catholics from Galicia, which was definitely funded by the oligarch Kolomoisky, the next question is: why?

The blow to the Ukrainian economy fits into the war between President Petro Poroshenko and Igor Kolomoisky, which led in the spring of 2015 for the expulsion of the first second after the siege of the company “Ukrnafta”. Thus, the blockade becomes Kolomoisky way to destabilize Poroshenko and his ally Yulia Tymoshenko. Anyway, there is a third oligarch, which can be collateral (or intentional) victim of the conflict: Rinat Akhmetov. On 20 February the company “Metinvest” announced the closure of coal mines “Krasnodonugol” (LC, 15 000 employees), which were delivered in the Ukrainian energy market and at Enakievo metallurgical plant. Employees of the two companies actually remained without work with pay two thirds of salary. On the same day the Kremlin announced a temporary humanitarian recognition of passports and official documents of the DNI. The recognition will be valid until a political settlement of the Ukrainian crisis.

In response to the blockade the President of DNR Alexander Zakharchenko said that the whole industry, which has not yet been nationalized, will be from 1 March 2017. In a desire to prevent the confiscation of the assets of Rinat Akhmetov, according to Semenchenko, sent on 28 February about a hundred “titushek” to break the blockade. Three barricades were stormed, and the collision resulted in the arrest of 37 aunts at the station “Curve end” near Kramatorsk. It is worth noting that, according to eyewitnesses, the police detained only the attackers, but could arrest everyone. Does this mean that Kiev is interested in the aggravation of the situation and wants to give the DNR the ability to impose sanctions?

The next day was nationalized 40 largest enterprises. The list must have surprised many of the residents of Donbass, who believed that they have long departed to the state. The fact that the nationalization of the assets of the oligarchs was one of the main requirements of the DND and LNR in 2014. Despite the presence on the territory of the separatists, these companies were paying taxes to Kiev in the amount of $ 1.2 billion. The money went including the funding of the ATO. Fee those who shed their blood, was one of the paradoxes of the separatist republics. Total losses for the Ukrainian budget are estimated at $ 3.5 billion or 5% of GDP. The most optimistic estimate is 2% of GDP. These losses can result in a depletion of foreign exchange reserves and devaluation of the hryvnia.

Loss of Rinat Akhmetov immense. They made in February to 6.5 million USD in the factory in Avdeevka and 4.5 million enterprises in Mariupol. His company, Metinvest said in a privatization statement about what is not going to pay any taxes LNR and DNR.

It is likely that new coal war of oligarchs linked with the recent deterioration of the situation in Avdeyevka: the purpose could be the termination of deliveries to the plant of coke from the DNR.

As already noted, the blockade could have very serious consequences for the Ukrainian economy. The question arises: how can we let a group of 55 people to destroy the economy of the country? Whatever it was, the blockade supports 60% of the population. This is partly due to the fact that Kiev can not freely speak on the topic, said the Ukrainian journalist Sergei Rudenko in an interview with Deutsche Welle. The government forced the media to keep quiet about the procurement of the separatist coal. From a political point of view it would be quite impossible to demand sanctions against Russia and say that the Donbass is controlled or even occupied her, continuing in parallel, the purchase of coal. Thus, Kiev was held hostage by three years of propaganda against the East of the country.

The problem of financing the Donbass, as always, compounded by the Ukraine embezzlement of funds. Under the supervision of the IMF produced mainly in thermal power plant electricity should be sold at a loss. Its cost is calculated from the coal price and the quotes of the Rotterdam stock exchange ($81) plus transportation costs ($37). That is, the cost of electricity is calculated on the Ukraine from $ 118 per ton, according to the “Rotterdam+”. In fact, however, the Ukrainian thermal power plants received coal from the Donbass at a price of $ 64 per tonne including transport costs. That is, the overpayment amounted to $ 54. Given that last year Ukraine bought from Donbass 9 million tons of coal, it is about 486 million dollars, who pulled out of the wallets of consumers.

In conditions of growth of tariffs for electricity by 285% from 2014 funding of war and the enrichment of the oligarchs may explain people’s support of the blockade of the East. However, there is also another related victim (this hardly would have been lamenting all Ukrainians): Petro Poroshenko. Maintaining a blockade in defiance of Moscow, the EU and the “seven”, he signs in his own political weakness. And may lose the image of “the right person in the right place” in the West. If you add the prospect of a decline in GDP, the same conclusion can come from the IMF. This greatly increases the likelihood of early parliamentary elections in Ukraine. Who will be the main winner? The Party Of Yulia Tymoshenko. In anticipation of early elections or even their own bias Poroshenko will play the card of the oligarch, not the President. That is, he will consider the blockade as an economic opportunity to buy the financial Empire of Rinat Akhmetov for less money.

Epilog: almost two years ago, Glucksmann Rafael (Raphaël Glucksman) said the program “Tonight or never” by Frederic Taddei (Frédéric Taddei), that Ukraine is not “Nazi”, because they scored only 2% in the elections. According to him, these 2% (750 thousand of voters) has no political weight in the country. Only here today, only a hundred of them was enough to take her hostage…