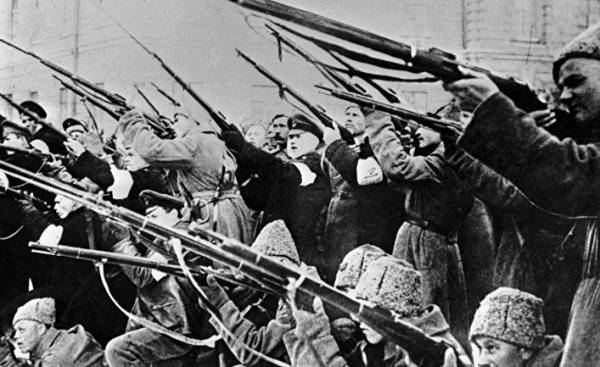 Aftonbladet section about culture in the course of the year will focus on the dramatic events of 1917 with the aim to expand the field of discussion on the prerequisites for a democratic breakthrough at the time.

Today say a few words about the real heroes of the revolution, which is often overlooked: women.

Tomorrow will be one hundred years since it all began.

Petrograd, modern Saint-Petersburg, for several months resembled a powder keg. War was the third year, two million soldiers were killed, there was hunger, there were strikes and lockouts. But it is the women workers of textile factories in the radical Vyborg side on the morning of 8 March, international women’s day, carved the first spark.

They no longer wanted to accept the fact that you have to stand in long queues for bread and not be absolutely sure that you will get some food. Under the slogan “Bread!” and “World!” they went on working areas of the city and led their co-workers and women I met in queues for bread. On the way they searched bakeries and grocery stores in search of items destined for the black market.

Men who are in the factories heard them shouting out “Down with the war! Down with high prices and famine!” joined him, and the crowd became more and more.

Russian revolution — one of the most significant events of the 20th century.

A month later, started the event in Sweden. Wives of fishermen marched in procession to the city hall in Stockholm, and demanded food for their children. 400 workers of the factories in Karlstad staged a demonstration in front of the magistrate demanding the same bread ration as in men. Angry housewife in the square Mollevangstorget in malmö and the area Ketoret in Stockholm attacked and took the potatoes from traders who raised prices in 10 and even 20 times. Then to the hungry, the rebellion was joined by men — it was the largest popular indignation that has ever happened in the country.

The events of the spring of 1917 became an important prerequisite for what is little more than a year later, was introduced universal suffrage.
The revolutionary wave that began in Russia in the spring of 1917 and covered Europe, radically changed the situation in the world. A couple of years of the Emperor was no more, not only in Russia, but in Berlin and Vienna, and in some countries, all men and women received the right to vote.

Now preparations are underway for the democratic celebration of this centenary. Yes, the Parliament has appointed a special Anniversary Committee. But what place in this celebration is food riots and protests by women workers in 1917? In the TV program about miss Freeman, they carefully avoided.
Some will try to assign them the credit. “Moderate” to everyone’s laughter already made such an attempt. Many forget that the bourgeoisie in the spring of 1917 was against equal and universal suffrage. The right didn’t want to recognize women’s right to vote.

And the liberals wanted to limit the power of municipalities to keep the upper house as a conservative brake, opposing the threatening masses.

Yes, even miss Freeman and the women’s movement for women’s right to vote was not in favour of universal suffrage. They demanded that women vote on the same basis as men. And since many men were still denied the right to vote, first in municipal elections, hundreds of thousands of women workers too would have been deprived of this right.

There is another detail that is not mentioned in the celebration. What form of democracy was not predetermined.

Today a representative parliamentary democracy seems like it’s a synonym of democracy in General. That democracy should stop at economic power, it is taken for granted.

But spontaneous movements in the workplaces, in residential areas, among soldiers in many parts of Europe were also an alternative that was based more on the active participation of people in management, primarily in the form of various forms of democratic councils.

The fact that participation in the democratic process was limited to voting every four years, in which power is political and bureaucratic elite, was hardly taken for granted by those who just overthrew the kings and emperors. Democracy was supposed to spread to all sectors of society, and embodied, in particular, in the field of workers.

During a few dramatic years, the question of democracy was open. Then the door slammed. It’s time to open it again.