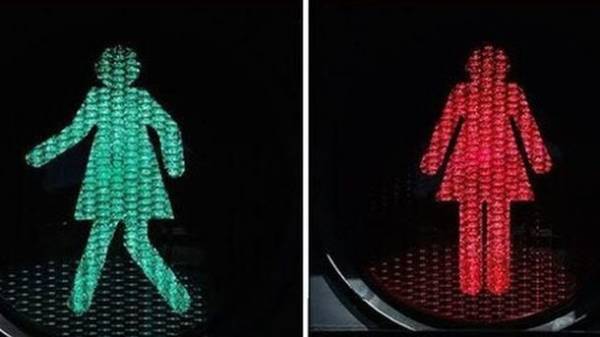 In Australia there were “female” lights. On Tuesday, March 7, reports the Herald Sun.

The publication explains that male silhouettes turned into a female after adding skirts. Such an experiment in the campaign for gender equality decided to carry out the authorities of the state of Victoria, on the proposal of the public organization “Focus group of the future.”

The experiment will last a year, the venue was Melbourne, and only there found ten such lights.

The innovation caused a heated discussion. As shown by the newspaper Express poll, 94 percent of its participants. said that the figures in skirts not call them positive emotions, and money spent on installation of traffic lights, it would be possible to spend more rationally. Most of the respondents expressed the view that to introduce into the minds of the idea of gender equality should be more serious and to waste your time on such trifles are not worth it.

Herald Sun recalls that Australia is not the first country with “women’s” traffic lights: in Germany, there are green and red men in a dress and pigtails.