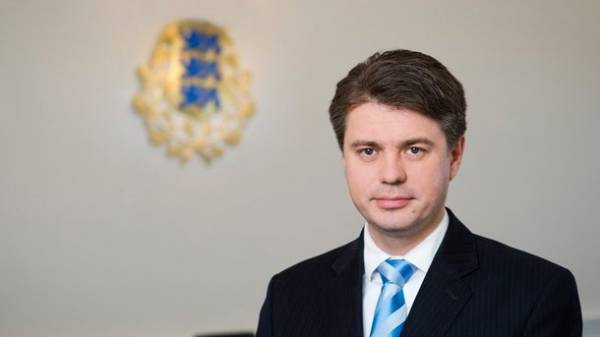 The Minister of justice of Estonia Urmas Reinsalu (Urmas Reinsalu) believes that the state has grounds to demand from Russia as the successor of the USSR an apology or compensation for the damage incurred in his years in the Soviet Union.

“The Estonian state has the right to demand an apology or compensation, as he had the succession after the annexation by the Soviet Union in 1940”, he said on Monday in Parliament, responding to parliamentary inquiries.

The Minister noted that in 2004 the Estonian government adopted a decision that, on the basis of international law during the “occupation” was damages, and that the Executive should address these issues.

“After 2004, no subsequent government has not changed with this decision,” he said.

Reinsalu said that as justice Minister he intends to deal with these issues in the future, and said that under the current government at the end of 2016 on his initiative was established the expert Commission to identify the damage caused to the state by totalitarian regimes.

“The task of the Commission is to analyze casualties in occupied Estonia totalitarian regimes, assessment of economic and environmental damage on the basis of the methods used in Estonia and in other States and recommendations for further work,” said Reinsalu.

According to him, “the Ministry of justice is responsible for identification of the damage and how long it will take the appropriate conclusions, it will be necessary to bring them to the government for decision-making”.

However, he noted that the requirements of the Estonians living in the territory ceded to Russia after the Second world war on reparation are “legitimate.”

“These issues need to cooperate with Latvia and Lithuania, to have a comparable approach to identifying damage to its basis to draw conclusions on how to define requirements, using the possible international law”, – said the Minister.

Earlier, Prime Minister of Estonia jüri Ratas said that Russia’s actions in Crimea, in Eastern Ukraine, parts of Georgia and Moldova pose serious challenges for Estonia and its allies.