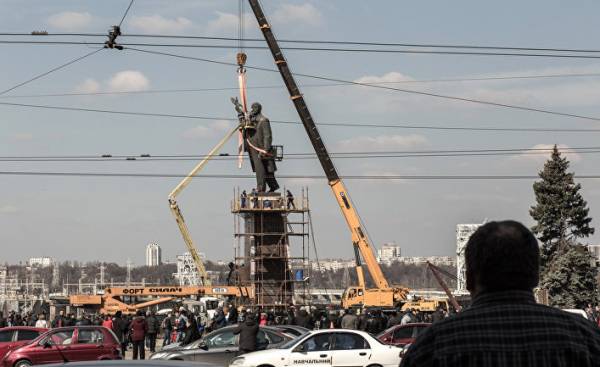 The Institute of national remembrance decided to rewrite the calendar of holiday dates and weekends Ukrainians. For public discussion was submitted the draft law, which is a logical continuation of the policy of de-communization in the country. Ukrainians can send their wishes as to which holidays to add, and which to simply remove from the calendar. Will March 8 and may holidays this year, what new holidays can appear, and what are the chances that the changes will support the deputies, to understand “Apostrophe”.

What is planned to change

In the explanatory Memorandum to the bill notes that the revision of public holidays associated with the need to consolidate society. “The current system of state holidays and memorable dates in Ukraine combines inherited from the Soviet era and entered at the time of independence. This situation is not conducive to the construction of national identity of the Ukrainian people. The creation of a new complex of public holidays will contribute to the final overcoming of the Communist ideology and colonial stereotypes,” — said in the text of the document.

All holidays in the calendar should be divided into 6 groups. The first are state holidays, established in honor of the event or person of historical importance and influenced the independence of Ukraine and development of sovereignty. In turn, the state holidays can be a non-working day (only 6) or work day (10). The second group of traditional festivals, New year, Easter and Christmas. The following two groups: professional holidays and memorable dates, such as anniversary of an outstanding personality or the anniversary of the founding of the settlement. The last two groups — the days of trouble and days of mourning. Nationwide days of mourning seven. It is a fixed date, e.g., April 26 — the day of memory of victims of the Chernobyl accident. Days of mourning are set by the decision of the Verkhovna Rada or the President in connection with a mourning event in Ukraine or the world (natural disaster, plane crash). Under the bill, TV and radio these days are required to remove from broadcasting any entertainment or Comedy shows, every hour to distribute live information on the funeral day, and 12:00 to announce a minute of silence accompanied by the sound of the metronome.

In addition, the authors of the bill propose to reduce the number of output and introduce new holidays in the calendar. Now Ukrainians have 11 official Bank holidays in the year. Their number will be reduced to 9. From the calendar of holidays may forever leave international women’s day March 8, will also have to work hard in the days of international solidarity of workers on may 1 and 2. “These international days are designated as holidays and days in Ukraine in the first years of the Bolshevik government, was established to support socio-political movements”, — stated in the explanatory note to the bill.

Instead of the output on March 8 can draw a non-working day on March 9. It will be a new holiday — the Kiev day. Adds the output and the second Friday of each September. It will be a family Day. It is also planned to cancel additional day off if a public holiday falls on a weekend day. The exception is for the traditional holidays — New year and Christmas. By the way, the weekend of Pentecost in the new calendar was lost, because the text of the bill this religious festival is not even listed in the list of traditional. However, in practice, an extra day off on Pentecost, which always falls on a Sunday, shall be appointed by resolution of the Cabinet on Monday. “I like a man who is also a Christian, I can say that Easter is a much bigger holiday than the Trinity, and much more is celebrated in the whole world”, — explained the “Apostrophe” situation with the exception of the Trinity from the list of traditional holidays, the Director of the Institute of naramata Vladimir vyatrovich.

Understand whether the company

It is obvious that the lively discussion will raise the question of the transfer of the day off may 9 8 may — Day of memory and reconciliation. Although may 9 remains a national holiday, if the bill unchanged would support the people’s representatives, to rest on this day, Ukrainians will not have to. And it was fakie on the abolition of the celebration of may 9 in Ukraine love to replicate the Pro-Kremlin media. Stories about the “junta”, which takes the veterans a solemn day, a perfect lie in the concept of propaganda “fascist” Ukraine. The fact that the holiday will remain a state, is clearly going unnoticed, because in the minds of people can work definition: no weekend, no holiday. It is unlikely that the promoters will not take it on Board, which can lead to new scandals in the society and new sources of divisiveness. In this case, why give another reason, and themselves be substituted under attack in an information war?

But Vladimir vyatrovich says that Ukraine should not pay to such things attention, and to pursue an independent policy. “Propaganda can twist any facts in the case, if people are willing to accept this lie. But the point is that the victory Day over Nazism on may 9 remains a national holiday, and weekends we offer make it may 8 to celebrate European format the end of the Second world war,” — said vyatrovich.

All Ukrainians have to taste the “European format”? For example, the Chairman of the Kyiv city organization of veterans of the great Patriotic war Nikolai Martynov said that the veterans are not happy with the innovations of the bill. “Of course, we are not talking about whether to cancel the may 9, it remains the victory Day, as in the law of Ukraine said. But in General, veterans have a negative attitude to the fact that may 9 will cease to be output, it turns out that it will not be quite the festive day. In addition, be offended and women have in organizing that March 8, may cease to be a holiday”, — said Mykola Martynov comments, “Apostrophes”.

But not all changes in the calendar of holidays potentially dangerous. For example, the appearance of the Shevchenko day can be assessed positively. “I always knew that the day will come, the time will come when Ukraine will be determined and will be Ukrainian, and then two days on 9 and 10 March will be festive. It will be like a spiritual Easter, so that people had the opportunity to touch the works of Shevchenko”, — told the “Apostrophe” laureate of the Shevchenko prize, the artist Anatoly Palamarenko.

Experts interviewed by “Apostrophe”, say that the changing of the holidays will be painless for society. “Why at the time cancellation at Kuchma celebration on 7 November was the occasion for the split of society, but now become? In order to cancel some holidays, the socio-political situation will never be good, especially because of the holidays we still have too much. For example, why we have a day off on may 2, I don’t understand? Why may 1 is still clear, why 2 may not. Similarly, on March 8, you can leave a festive day, but not weekends,” says political analyst Yevgeny Magda.

However, Ukrainians who live in the occupation, don’t believe that the festive decommunization be without the noise and dust.

“I remember the speeches at the rallies all these folk neogumanistov and other leaders of the “new Russia”, which from a tribune shouted, as “Bandera” want to get the usual holidays, formed in the Soviet era, but they, they say, will protect the memory, will not “junta” with his dirty paws to stir up the wonderful Soviet past. It was one of the main theses, sort of a horror story, says “Apostrophe” a resident of Donetsk Michael. And you know, grandmothers and men over 50 they enthusiastically applauded, and then all together went to smash the administration. And then, in the Donetsk celebrated on may 9: parade, “Generalissimo” Zakharchenko all in order, Givi tank… From the holiday did not just a cult, but an ideological weapon. And the people who carried on such propaganda, in Donetsk remains very much, and I don’t think that the cancellation of the celebration of the same March 8, will cause them to have warm feelings toward Ukraine. It is likely that Soviet holidays really should be removed. For example, I many of them do not say anything, so just another reason to drink. But isn’t it better to do it after the liberation of territories, but not in the period of confrontation? Otherwise you get to the point that the war will go for how to break a boiled egg”.

The word for society and MPs

Vladimir vyatrovich acknowledges that the bill is really debatable. On the President’s website, there were even two petitions: the authors of one demand “to leave alone the occasion of women”, and the second to close the Institute of naramata “in connection with the anti-popular activities of this institution”. But in order to explore the attitudes in society, the bill was submitted for public discussion. To participate in it can any Ukrainian. To do this, until March 1, it was necessary to write their proposals by e-mail of the Institute of naramata [email protected]

At the Institute say they received more than 500 letters and now will work on their analysis and proposals. “A lot of proposals includes, for example, to make 25 December weekends (in this day falls Catholic Christmas, “Apostrophe”), there are protests against the abolition of the March 8, there are protests from the trade unions about may 1. Now there is a debate and in this debate, I’m sure we can come to some sort of more inclusive solutions. Just gradually getting rid of the Soviet legacy, we will actually be able to talk about the Association of Ukrainians on the basis of the Ukrainian values, because the Association of Ukrainians on the basis of Soviet values is something that will continue to use Russia’s war against Ukraine”, — concluded the Director of the Institute of naramata.

However, political analyst Andrei Zolotarev urged Ukrainians not to panic prematurely. “I don’t think in its current form the bill is passed. The authorities have enough problems, including reputational, to create another point of conflict around the holidays,” — said the analyst.

Even the MPs from the coalition recognize that to change the calendar of holidays in Ukraine. “It’s not the primary bill, which is now discussed. We are on a fraction of it haven’t even discussed. He will appear on the agenda, then we will have something to say,” say “Apostrophe” head of the faction “people’s front” Maxim Bourbaki.

The same opinion as his colleague in the coalition, the Deputy head of the faction “Block of Petro Poroshenko”, scandalous Deputy Alexey Goncharenko. “Listen well, today, the country is not exactly the most important question that needs to be urgently addressed,” — said Goncharenko.

With this approach, the MPs can be predicted that a bill on decommunization holidays will not soon be tabled in Parliament. Moreover, the draft law has not even officially registered in the Verkhovna Rada, the text can only be seen on the website of the Institute of naramata. By the way, the Institute did not have the right of legislative initiative, but is the body of the Cabinet, so it is logical to expect that after public discussion, the government will register the document. Discussion of the bill only ended, after that the document is waiting for a thorny path of parliamentary committees and several readings in Parliament. The procedure can be delayed for a year or more, this means that, at least for the next 8 March with flower sellers will once again feel like a moneybags, and may 1 and 2 from forest plantation will emanate the aroma of the kebabs.