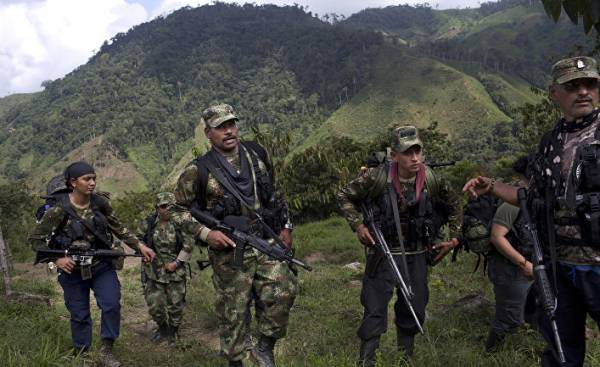 In the graph of peace in Colombia March 1 designated as the day when fighters of the rebel group “Revolutionary Armed Forces of Colombia” (FARC) must proceed with the surrender of weapons. Arrived in the country the UN mission begins the first stage of this process — a census of weapons. Employees of the international organization using the barcode will register the fighters and their weapons. Gradually, all the weapons will be placed in containers that will be placed in 25 areas of the transition to civilian life. The rebels live in these areas for several weeks. Today, Colombians will not see the fighters of the FARC, held last March, after half a century of hostilities. Neither today nor in the future.

First passed the arms 322 of the rebel, included in the Mechanism for monitoring and verification, consisting of representatives of the United Nations, the FARC and the Colombian government. The transition to civilian life is first and foremost the rebels themselves, they monitor the observance of agreements concluded over the last four years in Havana. After their rifles will be registered, in the process of delivery of weapons will join the rest 6.900 fighters of the FARC. According to the officially approved plan, the first phase will be handed over 30% of weapons; from may 1 — another 30% and the remaining 40% until 1 June.

The delays that accompanied the beginning of a return to peace in Colombia, to a large extent hamper the implementation of this schedule. The only date that must be met under all conditions, 1 June, when it will expire 180 days, during which, in accordance with the agreements of the parties, all weapons must be handed over to the UN mission, and fighters of the FARC needs to return to civilian life. The mission employs 450 observers, who will go to camp for monitoring the surrender of weapons.

“We will make changes to the plan for the destruction of worn weapons and explosives,” — said Ivan Marquez (Iván Márquez), the commander and the Secretariat member of the FARC. A group of rebels accompanied by the pyrotechnics of the UN may withdraw from the forest areas, in order to destroy heavy weapons. The rebels have provided details about the available caches, depots, located in the middle of the Colombian jungle, where they for many years held ammunition, mines, grenades and other weapons.

“It’s a partial, but substantial progress on the issue of surrender of weapons, which the UN mission considers as a good starting point to overcome the delays in the implementation schedule”, — admit UN staff. The head of the UN mission in Colombia Jean Arnaud (Jean Arnault) to the inside of the letter, who became known to the press, expressed its concern over delays in the peace process and raised the question of amendments to the original schedule. The Supreme Commissioner for peace Sergio Jaramillo (Sergio Jaramillo), supported by the Ministry of foreign Affairs of Colombia, in response to the letter ruled out the possibility of any changes. “We believe that this process can be accelerated,” — said at the UN.