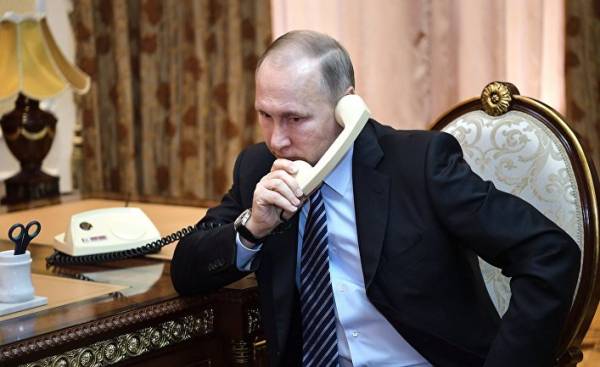 In Russia gradually abates the euphoria caused by the election of Donald trump as the new President of the United States. Replaced by sober realism. Since trump announced plans of expanding nuclear Arsenal of the United States, is experiencing dissatisfaction and the Moscow establishment. In autumn, after his election, Russia approved the idea that if trump’s Kremlin, finally will be recognized as an equal player on the world stage. Growing hope for the lifting of sanctions.

A strange expectation. Still, Moscow has downplayed their importance in the past two years. Constantly argued that the impact of sanctions is negligible. It wasn’t a lie. As compared with the fall in oil prices and structural crisis in the economy, the sanctions were and are just another negative item in the current recession in the country.

The economic restrictions imposed recently by trump against other countries, to this hardly reacted. Strange position, according to Konstantin Sonin. In his comments, the Russian economist says that Putin and the Russian establishment could be the best advisers to the American President concerning the trade wars. According to Sonin, Russia could explain to Trump that such conflicts and economic isolation reduce welfare, but hardly lead to goals.

Approval Sonin is based on the fact that over the past 15 years there is hardly another country with such a rich experience of trade wars. Both as the initiator and the victim of economic sanctions. Both, in fact, brought nothing but harm.

Own economic sanctions have not been successful

For example, Russia imposed restrictions on trade with neighboring countries has made them more manageable in political terms. As in the case of the ban on the import of wine and mineral water from Georgia in 2006. Thus, Putin hoped to strike at your Pro-West Georgian opponent Mikheil Saakashvili.

Of course, the economy of Georgia suffered due to the embargo. But no country in the post-Soviet space is not changed so much in subsequent years. Georgia was more oriented towards Western standards of democracy and the fight against corruption.

In addition, the embargo has led to the fact that the Georgians improved the quality of their wine production with the aim of developing new markets. Today, Georgia is a favorite destination of Russians who enjoy local, southern flavor, cooking and intolerance to corruption.

In Moldova and Ukraine, restriction of imports of Moldovan wine or Ukrainian agricultural products has not meant that Moscow has been able to influence political processes in their own interests. They led to a decline in living standards, says Sonin, as in the aforementioned countries and in Russia.

One of the rare exceptions is Turkey. With a complete trade embargo and ban Charter flights to the country Putin was a success. Turkish President Recep Tayyip Erdogan later apologized for the shelling of a Russian military plane in 2015. Provocation in the midst of conflict, Putin, of course, went to high risk: Turkey is the second largest after Germany buyer of Russian gas.

The decrease in the level of life of Russian consumers

When Russia itself falls under economic sanctions, Putin is not going to political compromises. Although he is aware that it may lead to lower living standards of the population. As it is not only sanctions against Russia and counter-sanctions aimed at banning the import of Western agricultural products, led to higher prices and lower quality products for millions of Russian consumers.

So Russian consumers complained that almost can’t find Western cheeses on the shelves. For the Russian counterparts, they are now forced to pay twice as much. Only strict government control could prevent further price growth, said Western agricultural entrepreneur working in Russia, who wished to remain anonymous.

Russia officially stated that the contractee is a chance to replace imported goods with their own products. Import substitution is an economic term, denoting the rise of its own production — is a “double-edged sword,” said Alexei Portansky, Professor at the Higher school of Economics: “First, it is paid by the consumer. The creation of a new production and logistics chain requires a lot of time.”

The country is losing, few are winning

What is the return to the production of their own products in the long term can lead to success, proves the Russian automotive industry. Here Putin mild pressure to partially translate manufacture to Russia. Namely, the two decrees, which he issued in 2010.

They contain the requirement that foreign manufacturers have increased Russia’s production capacity to 35 million units per year with the localization of value added is not less than 60%. In this case, they get to 2020, a significant reduction of import duties on imported components.

The effect is felt: if in 2008 the share of sold imported vehicles accounted for 27%, in 2014 it was 18%. At the same time increased the number of foreign cars of local production from 25% to 53%. The remaining third of the market consists of Russian models.

However, this success is the exception to the rule. Therefore, the economist Sonya makes a very controversial conclusion, which could be interesting and the Tramp: while millions of people are forced to endure the damage from economic sanctions, and the country loses, there are those few who benefit from this situation.

According to Sonin, in the specific case of Russian counter-sanctions is a local agricultural holding companies, which suddenly got the ability to successfully sell their lower quality products. The worst is that these people have become lobbyists for economic sanctions, said Sonin. “Why trade war is relatively easy to ignite, and then to complete them, requires quite a lot of time.”