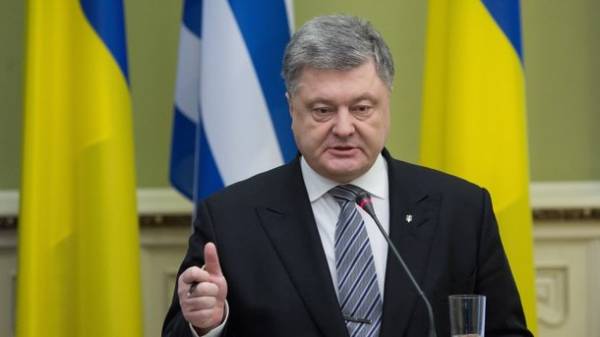 The President of Ukraine Petro Poroshenko at the meeting with foreign Ministers of UK and Poland Boris Johnson and Witold Wasikowski discussed the situation in Donbas, sanctions against Russia and the conclusion of negotiations between the EU Council, the European Parliament and the European Commission on the abolition of visa regime for Ukrainians.

“The interlocutors discussed implementation of the Minsk agreements and the situation in the Donbass. In particular, they talked about the importance of adherence to EU sanctions against Russia until full compliance with obligations in the framework of the Minsk process and restore the territorial integrity of Ukraine”, – reports a press-service of the head of state following the meeting.

Poroshenko thanked the UK and Poland for their strong support of sovereignty and territorial integrity of Ukraine.

“In the framework of bilateral cooperation was discussed organization of the visit of the President of Ukraine to the UK in the near future”, – stated in the message.

In addition, the President of Ukraine welcomed the conclusion of the tripartite negotiations between the EU Council, the European Parliament and the European Commission on the abolition of visa regime for Ukrainians, noting the need to expedite this process.

“I really hope that the European Parliament will soon make a decision that will give green light for decisions of the EU Council on the introduction for Ukrainians visa-free regime”, – said the head of state.

Poroshenko thanked the foreign Ministers for the contribution that Poland and Britain have done in this matter, and expressed hope for further support.

The interlocutors also touched upon the issue of the implementation of the Association Agreement between Ukraine and the EU. The President expressed hope that the Netherlands will soon complete the ratification process.

As noted, at a meeting with Ukrainian Prime Minister Volodymyr Groisman, Boris Johnson has offered to host in London a conference on reforms in Ukraine.