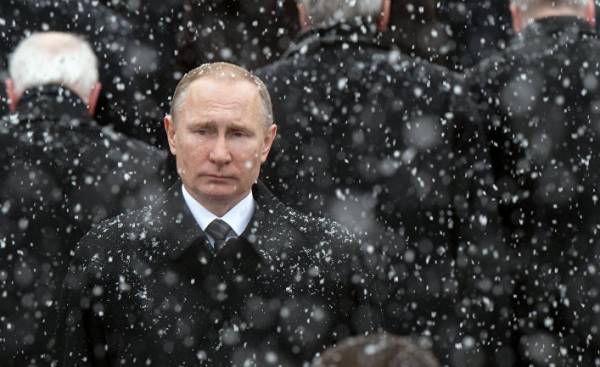 It was incredibly long. This is the first thought that comes to mind when you see Moscow pictures of Daniel Biskup, which he made in the years 1988-2000, “between perestroika and the Putin” — as he himself says. That is the name of his exhibition in Nuremberg (Palace of Checler, until may 7, 2017). Bishops it is the role of the satellite “rise” of the country. The fact that his pictures today seem almost anachronistic, the photographer most distressing. He is a connoisseur of Russia and the people living here.

Welt am Sonntag: You really are something of a favourite photographer Putin or is it an error?

Daniel Biskup: let’s just Say I often had the opportunity to photograph. The first chance I got in the summer of 2000, as soon as he became President. And the last time I shot it in January last year. I photographed him in his office. Behind a Desk. As well as playing hockey. In total I shot it six or seven times.

— How it has changed over time?

Two things have not changed: first, he very quietly says. Almost whispering. And second — when talking to someone in German, because he speaks the language, it always tries to be polite. At the first meeting he seemed almost shy. He behaved rather modestly.

— If you meet him, you will see another Putin. More stringent. Putin, symbolizing Russia is a strong Russia. And this is not theatrical: he believes in it.

— Open, friendly, inquisitive Putin has turned into a self-centered “hawk” — what happened?

— I think it has something to do with unrequited love. After the change in the public sphere under Gorbachev and Yeltsin in the 80-ies and early 90-ies, many Russians had hoped that the West will take their country with open arms. In fact, the West regarded those events as a kind of final episode in the struggle between the two systems — capitalism and communism. The rise, which Russian themselves “prescribed”, was interpreted as a victory of West over East. And the Russians felt this attitude for yourself. Them it hurt. Because they wanted them to be treated as partners on an equal footing.

— The consequences we are now witnessing. Putin’s foreign Minister Sergei Lavrov just at the Munich conference on security called for the creation of “postzapadnoy world order”.

— Yes, it is a response. One Russian author with whom I recently met, says that the West is to blame for what has become Putin. After all, we just aren’t understood the situation in his country.

— The rejection of the Western order is a phenomenon that is the opposite of the euphoria of the late 80-ies, when You first arrived in Russia, isn’t it?

— You could say that. Then I was on the bus took a picture of a soldier with the Russian and American flags in their hands. And at the other bus was the inscription: “Success — Russian American Joint Venture” (Rus. The success of the Russian-American joint venture). Today such already it is impossible to imagine.

— Describe the atmosphere that prevailed in Russia then!

— Everything revolved around Gorbachev, Perestroika and glasnost. Movies, who for 20 years was banned, suddenly started to show in the movie. Appeared Newspapers: people first felt what it was like to speak freely about what they think. Before freedom of expression was not possible, not without risk to life or risk of falling in the GULAG. I saw a country on the threshold of change, when all looked to a brighter future. First of all, youth.

— Everyone liked the change?

— In Russia believed in something in common and wanted a joint effort to change something. I had the impression. Even in the 80-ies in the Soviet Union “shattered the” national question, when the Baltic countries loudly announced their identity, part of the population of Ukraine on the Ukrainian and Georgian — Georgian, during the coup against Gorbachev all nevertheless took to the streets and sided with the reformers.

— The coup against Gorbachev in 1991 was followed by a coup against Yeltsin in 1993. Then there were those who did not want to have anything to do with the paradigm shift in Russia?

— When people for decades hammered into the head that they’re better than that they are the vanguard of socialism and set an example to the world, and then suddenly announce the completion of this experiment, not everyone can handle such a shock. Not everyone participated or wanted to participate in this coup, because professed values, different from those that were offered this Grand capitalist world brought before them.

— As it was and what it has turned Russia?

— Opened the window, and people grabbed what they could get: they wanted to get rich and spend money to live large, and those who stayed away, with horror looked at it. It was not what they imagined. At that moment they rather wanted to return to his native Soviet deficit economy. Because it gave them some confidence.

“Yeltsin was overcome disease. Needed a successor to”

Images that You did in Moscow in the years 1988-2000, illustrate some coexisted in the country of contradictions: a gaping emptiness in grocery stores. Bright life in the clubs. Proud participants of the beauty contest at that time, in the same city but in different area, raging a coup. In all this chaos did it seem to You that the reformers can fail?

— At that time, no. Yeltsin had a big problem: the economy is in decline, high unemployment, inflation. The coup against him, which killed 150 people, has become something of a civil war on a small scale. But the population of the country has always been on his side.

— Yeltsin was overcome disease. Needed a successor. I assume that people from his immediate surroundings, such as the former KGB chief Yevgeny Primakov, who has known Putin since the time of the service in intelligence, said, “This will probably fit. It is stable. You can try to put it.

— Nice try! And now in power, the President, and stopped the mouth of the opposition.

— In Putin’s Russia, the opposition life is not easy. This is true. Independent TV channel “Rain”, for example, recently can be viewed only on the Internet.

— I’m afraid, “postzapadnoy” means that Russia is seeking to split West. The Kremlin wants to play in Europe a role. Wants to be taken seriously and defends their interests. The existence of European Union and cohesion of its member countries in this case are rather an obstacle. This is also the reason why opponents of the European Union, from marine Le Pen Marine le Pen and Geert Wilders (Geert Wilders) and ending Frauke Petry (Frauke Petry), trying to establish contact with Putin.

— You were recently in new York and photographed the new US President for his Desk. Recalled if You, Donald trump, Vladimir Putin in 2000?

— Trump has treated me friendly and very attentive. He was not so violent as it appears to the society. In short, gregarious man. But shyness and modesty, like Putin, he is no different. Restraint is not his trait. But at the same time he’s not acting like you’re small fry. And because it is the most influential person in the world.

“Trump said he is not a politician”

— If trump get along with Putin or come to blows?

— Hmm. I don’t know how seriously you should treat statements of the U.S. government that Russia should return the Crimea and that Ukraine must finally be peace. A threat whether it is or said just. Now after all the trend is such.

— I mean, that trump always said that he is not a politician and now under this statement you can easily sign. Trump just says what he thinks. A diplomat he certainly is not. However, the fact that the language of politics in General, coarse — to recall a skirmish between Turkish President Erdogan and the German government or “verbal mistakes” Viktor Orban and Lech Kaczynski. It’s a bad sign.

The interest of Daniel Biskup East due to family tradition: his mother was from Gdansk, father of Silesia. He became famous in 1989 thanks to the images devoted to the fall of the Berlin wall. Biskup was born in 1962. Among other things, he studied political science. He is one of the leading contemporary German photographers.