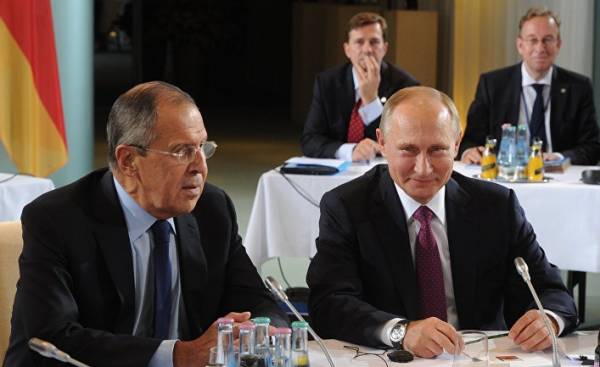 Sergey Lavrov called the world’s best diplomat, and often even his opponents admire him involuntarily. It is described as cool, smart and incredibly experienced person. Besides, he’s witty, that among diplomats does not occur very often.

Sergey Lavrov, 66 years old, and he is a professional diplomat, a clever negotiator and can easily alternate the stony expression and a refined courtesy. With his height and article Lavrov dominates any room. This is very effective when you need to push for tougher Russian foreign policy. However, many believe that no foreign policy he is just not engaged, but simply follows the line defined in other circles, above, and these circles are constantly narrowed.

Sergei Lavrov — Russian foreign Minister since 2004, and prior to that, he spent ten years in the UN, so he knows the functioning of the international community. He knows everyone who’s worth knowing and speaks many languages.

Not love, but respect

During Lavrov’s stay on a post of the Minister of foreign Affairs of Russia has gone from weakness to strength. Maybe Lavrov is not love, but respect — as well as the state which he represents. After the chaos of the 1990s, Russia was considered a country on the verge of collapse, having no influence, but gradually she regained part of its former status in the international arena.

A long time between Russia and the West had effective cooperation, but in recent years we see that Russia is acting more aggressive. Have thoughts about the cold war. This tone Sergey Lavrov should maintain in their contacts with the United States, Europe and NATO.

Russia entered Georgia in 2008 and annexed the Ukrainian Crimea in 2014. It was a shock to the world, and the country was subjected to sanctions.

The sanctions affected the country economically and especially politically. Russia has become a pariah, an outcast of the international community.

Worse than ever in a long time

Russian-Swedish relations have also become worse. Lavrov threatened that Russia will be forced to “take necessary measures” if Sweden closer to NATO.

Between Russia and the West was dominated by ice cold.

Syria is a turning point

But suddenly everything changed with the introduction of Russian troops in Syria in 2015. They went in to support the Assad regime, and officially — to fight against terrorists. They took the initiative and international attention.

It was no longer possible to ignore Russia, and she was able to sit down at the negotiating table in Geneva to discuss peace in Syria. Via Lavrov, Russia now speaks from a position of strength.

The US was forced to adapt to the new reality. This is the main goal — to push the U.S. off the pedestal of a superpower. Recently Sergei Lavrov has urged the world to live in “postzapadnoy world order”, which is not dominated by neither the US nor NATO.

Lavrov called NATO expansion the reason for the growth of tension in Europe. This caused the military build-up on both sides.

The world is put before a fait accompli. Vladimir Putin wants to make Russia once again a respected and feared great country. And foreign Minister Lavrov masterfully plays chess on his meetings with world leaders.