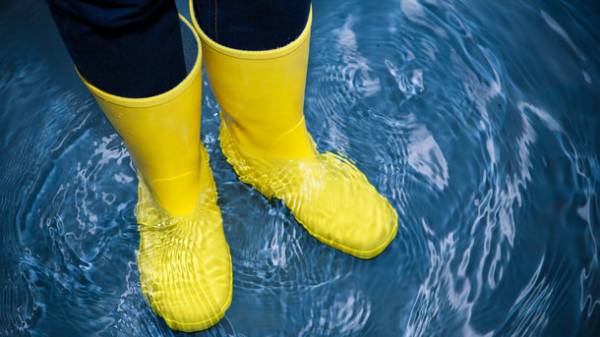 Ukrainians in the near future, as predicted by weather forecasters, expects the warming and precipitation. The temperature will fluctuate between the marks 9-11 degrees, while throughout the country except the South, the rains. Highest temperatures this week will be on the West of the country – up to 15 degrees above zero. The website “Today” found out what weather to expect Ukrainians in the next few days.

On Tuesday, February 28, throughout the country will be partly cloudy weather. Coldest this day in the East of the country. In Donetsk oblast the temperature will fluctuate between elevations of seven to nine degrees, in the Luhansk region from five to seven degrees Celsius. In the centre and South, from eight to ten degrees above zero. The same weather this day weather forecasters predict the center and North of Ukraine.

At the same time in the West, the air will be warmed up to 13-15 degrees above zero, in the afternoon the thermometer column will fluctuate between the marks of two to four degrees Celsius. 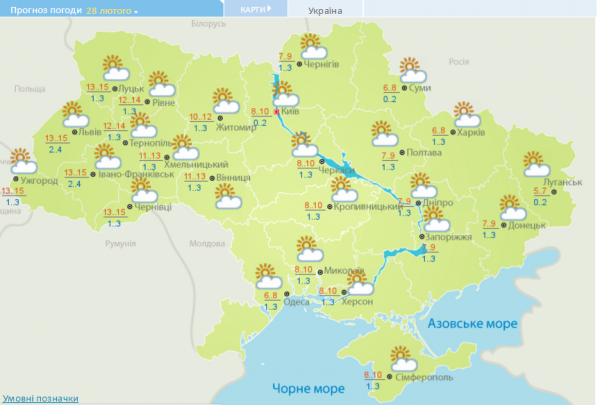 On the first day of spring warming is expected to 12-14 degrees Celsius in the South, in the centre the temperature will fluctuate between the marks 9-11 degrees above zero. Relatively cold weather is expected on this day in the East and North, and seven to nine degrees in the afternoon.

In the West of Ukraine will be in a strong rain, the temperature will fluctuate between the marks from 9 to 15 degrees Celsius. 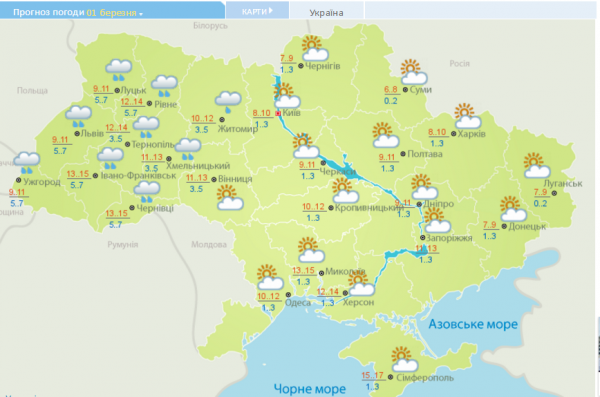 The second of March precipitation is expected throughout the country except the South and East of Ukraine. On the North, East and in the capital the thermometer column will fluctuate between elevations of seven to nine degrees above zero, in the South – from 9 to 11 degrees. In the Central and Western regions in the afternoon the air warms up to eight to ten degrees Celsius. 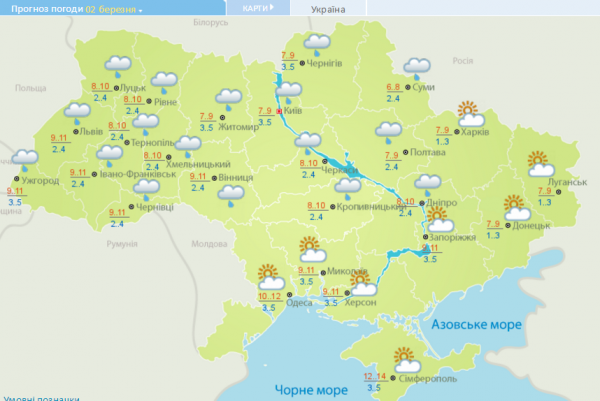 The third March of rain the cyclone will reach the territory of Eastern Ukraine, partly cloudy weather is expected in Odessa, Mykolayiv and Kherson regions, the rest of the – rains. In the South the mercury will fluctuate between the marks 9-11 degrees, in the West, the air warms up to ten degrees above zero, and in the East, centre and North – 7-9 degrees. 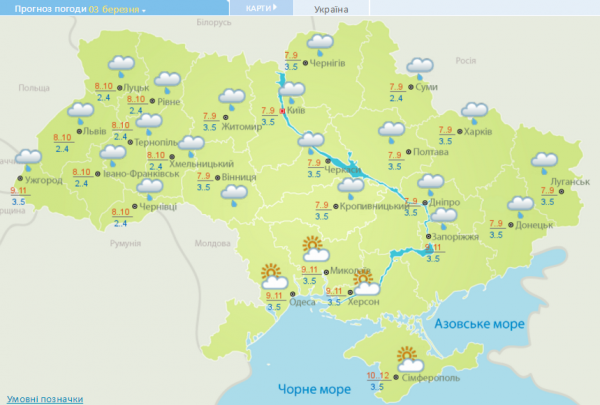 28 Feb revered the memory of the Apostle Onesimus, informs a portal “Weatherman”. If on that day the snow melted, the hay had promised to be good. In the old days said on February 28 the winter and spring begin to fight: “to move forward and who to turn back the clock”. Another said: “in February the call, so the fall will respond” — the weather that day could judge the weather in the fall.

The first of March marks the day of memory of the 12 martyrs: Pamphilos, Valens, and others. In the old days said: if from the first days of spring “dissipated, don’t be shy – be fooled, to believe nothing”. The weather that day predicted thunder and wind. If the first of March when the Northern wind thunder thunder, then spring will be cold, when the East wind – spring is dry, when the West wet, but at South warm.

The second March is revered the memory of the great Martyr Theodore of Tyrone and righteous Mariamna. In the old days believed that to watch night on the sky this day is not necessary, because seen on Fedora falling star could mean a serious illness. First time in a year visible Cumulus clouds, hoodie, sensing the coming heat begins to build a nest. People live in anticipation of the heat, but winter still reminds of itself by a sudden frost. “What is the weather on this day and this summer.”

Third Mar venerated the memory of Saint Leo, Pope of Rome, and of St. Agapito, the Confessor. In the old days said, “Fluffed willow, winter no-go to farm-yard“. On this day, revered bird-Bunting “the Herald of the imminent heat she was known as,” the peasant baked ovsyanitsky (cakes made of oat flour). Our ancestors tried to see as many indications of the imminent arrival of the heat, waiting for spring and rebirth of nature.

The fourth of March, the day of memory of saints Archippus, Philemon and his wife Apphia. In the old days this day was called Maniac. Since ancient times is the tradition that on this day one should not look for falling stars, as it is a bad omen. If “Fedot the snowdrift – to late grass.” If that day in the woods to meet a white hare – snow is sure to fall again. And if you are lucky enough to see flying Cup of tea, then the ice will soon go. Often in this day when the wind increases.