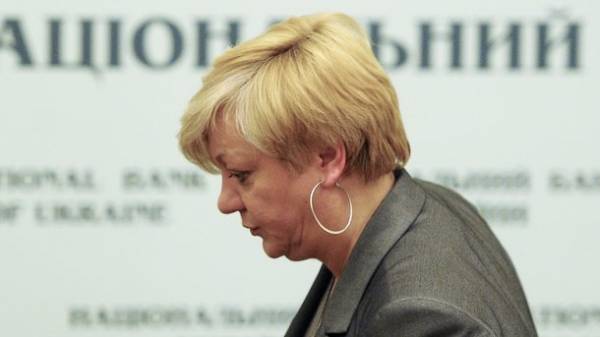 The resignation of the head of the NBU Valeria Gontareva again on the agenda. Sources “” in the three parliamentary fractions (BPP, “popular front” and radicals) confirm her resignation in the near future more than likely. We analyzed the causes of potential personnel changes and learn from the experts how it can respond to the hryvnia.

REASONS. Yesterday the national Bank of the rumors about the imminent resignation of Gontareva commented: “We do not confirm information about the resignation of the head of the NBU Valeria Gontareva. The national Bank traditionally in the past month according to future changes in the composition of the Board. This message is not displayed, and the information isn’t true” — retorted the press service of the regulator. Thus, according to some Ukrainian media, Gontareva may announce his resignation on Thursday — allegedly wants to resign because of fatigue.

At the same time, the political scientist Ruslan Bortnik said about multiple causes of the current rumors. “First — Gontareva can be a “sacred victim” because it is extremely unpopular with the people due to the collapse of the hryvnia. Therefore, it can be used in order to show that power responsibly. It will also be able to let off steam from society and to improve the power ratings. The second reason may be an attempt to strengthen the old or forming a new coalition. For this, place the head of the NBU can give you, for example, the “popular front”, — the expert says and adds: — the Probability of resignation Gontareva today — about 60%”. Bortnik does not rule out another reason: last week, assistant attorney General Vladislav Kutsenko said about the involvement of the head of the NBU frauds worth about 315 billion and the beginning of the investigation in NABOO. According to the analyst, this increases the probability of leaving Gontareva from the post.

COURSE AND OUTCOME. Analyzing the risks of retirement, finanalytica note: it is unlikely that the care Gontareva will seriously affect the hryvnia exchange rate. “After her arrival in the NBU refused from the stability function of HasValue, in other words, releasing the course to freedom. So after this resignation it is unlikely that anything will change,” said finanalitik Igor Shevchenko. Who, in his opinion, may be affected by the change of the head of the NBU are companies that buy products abroad in foreign currency. “For example, 80% of all pesticides for sowing, buying abroad. And while companies working with this product, will establish a new working relationship, they may incur losses.”

Economic analyst Ivan Nikitchenko, analyzing the work of Gontareva, praises her for cleaning up the banking system: “This is important, what it could achieve. It was really revolutionary. Plus the reforming of the NBU is very much updated staff and for other agencies it can become a model (Gontareva reduced the staff of the NBU by 50%, to 5.3 thousand employees. — Ed.)”. Experts positively evaluated and entered Gontareva inflation targeting, the macroeconomic indicators of the Ukrainian economy is no longer tied to the exchange rate and focusing on inflation. Positively say, and fulfilled the promise to provide the Deposit guarantee Fund money in full.

At the same time, the head of BP Committee penpalette and banking Serhiy Rybalka recalls: “we had a profound currency crisis, the hryvnia has fallen off three times! We are a group of experts proved that the actions of the NBU only exacerbated the fall of the hryvnia. Plus we got the biggest in the history of the country bankopad and profound banking and financial crisis”,- concluded the MP.

Among the possible candidates to replace Gontareva many names. “Call Arseniy Yatsenyuk and the Chairman of the Board of PrivatBank Alexander Shlapak. But this is a political post, so I think it is not excluded that will Woo Yatsenyuk. But these statements that persuaded him, and he supposedly doesn’t want a diversion in order to then agree and say, “I had,” — said politekspert Vadim Karasev.

And Nikitchenko, to the national Bank today functioned properly, then you can just call in the private sector and to attract someone of the top managers of major Ukrainian banks that successfully passed the peaks of the financial crisis.