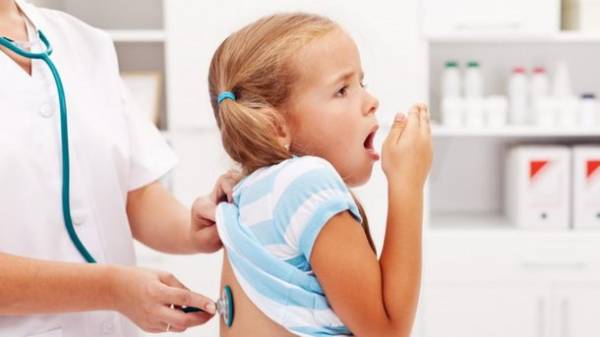 Children cough is one of the most common issues that concern parents. About 60% of the kids that come to the appointment with the pediatrician, have different manifestations of it. But not every cough is the reason for the intensive treatment of the child. Moreover, to treat him without identifying the causes of unsafe: wrong cough medicine can inhibit this important reflex, resulting in advanced disease.

THE GUARDIAN OF PURITY. “Cough — a protective reaction of the Airways to various “stimuli,” — says Svetlana Gorolevich. — They can be a non-infectious origin (tobacco smoke, dry air, foreign body) or infectious (viruses, bacteria, fungi). Receptors located along the respiratory tract, “protect” the lining and begin to get rid of a foreign substance, reflexively pushing it out of the respiratory tract. The body is freed of mucus and phlegm that accumulates in the Airways in the process of inflammation of the mucosa due to infection.”

Figuratively speaking, coughing is a mechanism to maintain the airway clean. So, the coughing generally is a good idea. Another thing, how exactly to cough, because the cough is different.

A NORMAL VARIANT. “Cough tremors in a child and adult, in the form of rare little cough to 8-10 times a day without any other manifestations of the disease can be considered the norm as odors and dust, especially in dry area, causes irritation of the mucous membrane, — says Svetlana Gorolevich. — Normal coughing in infants 2-5 months due to excess production of saliva: your digestive system is getting ready for adult food, and the child has not yet learned to swallow the saliva reflex. Swelling of gums during teething in children the first year of life sometimes provokes a copious flow of saliva and, consequently, cough”. Such conditions do not require treatment, only observation — not to miss the moment when the norm “submenu” another reason.

DIFFERENT REASONS. If we talk about non-infectious stimuli, in addition to “bad” air, which can only improve the parents, there are a number of reasons for a visit to the doctor. “The children often found psychogenic cough, as a manifestation of neurotic disorders. Also cough can be a kind of allergic reaction. Sometimes it is triggered by gastroesophageal reflux — when stomach contents thrown back into the esophagus,” says Svetlana Gorolevich. A separate topic is the presence of a foreign body in the respiratory tract. “The baby can breathe seed, and then coughing for days and weeks. Suspect foreign body aspiration is possible on the basis of this cough occurs against a background of General well-being, all of a sudden, and very intense. Attacks may eventually subside, but the cough will not go away until the body pushes the foreign body until it is overgrown by connective tissue, or until it is recovered experts,” — said Makarov.

In the list of infectious causes of cough in the first place is SARS.

“It often happens that the catarrhal cough caused due to cold, explains Makarov. It’s called a syndrome postnatalnogo draining mucus: mucus produced in the nose and throat, dripping down the back of the throat and triggers the cough tremors. It can also happen post-infectious cough as the residual phenomenon of the transferred viral respiratory infection: after disease, it can last for several weeks, going into decline. Cause of prolonged cough in children could be asthma. Even whooping cough (especially grafted) may be in the “erased” form — without hysterical attacks, but as a prolonged cough.”

Even before the medical examination on the nature of the cough, the parents may assume the sick child.

Superficial inflammation in the oropharynx area.

Staccato barking — laryngitis when suffering mucosa of the larynx.

Rude, Intrusive, sometimes accompanied by painful sensations in the sternum, — tracheitis (inflammation in the region of the trachea).

With all the Arsenal of cough in our pharmacies to be treated they can be used only on prescription. “Coughing is a protective reflex — recalls Makarov. — Oppress it with antitussive preparations is, if the cough is dry, hoarse, painful (for example, during pertussis). It was not particularly useful, but it can impair health, so it must be fought. If the cough is productive and aimed at removing the excess mucus from the respiratory tract, to oppress dangerous: the phlegm will accumulate, which can lead to complications.

As for expectorant preparations, they do not cure but merely facilitate the discharge of viscous mucus. Relatively speaking: if the child had seven times to cough to clear his throat, then mucolytics he coughs five times. In addition, children under two to three years to appoint mucolytics desirable: cough reflex they have developed is still not well.”

A cough can manifest various diseases, for which treatment needs in different ways. Sometimes you can do without intervention: for example, post-infectious cough goes away on its own and “postnatally” disappears as soon as the runny nose. And sometimes it requires a whole range of activities.

“If it is obvious that cough of catarrhal origin — it is light and does not cause much discomfort, then you can do warm water, ventilation and humidification. If it is accompanied by chest pain and shortness of breath from a baby, you need to contact the doctor who will determine the cause and will be on her right to work. Cough syrup will not affect the whooping cough, pneumonia or tuberculosis, but can be “run” illness and delay necessary treatment,” warned Makarov.

Whatever the cause of cough, parents can ease baby the healing process.

“If a child is coughing, keep him fresh and moist air in the room and extra fluid intake, says Svetlana Gorolevich. — The liquefaction of viscous sputum promotes alkaline drink: mineral water in the form of heat without gas, such as “Luzhanska”, “Polyana Kvasova”, “Borjomi”. Hydration — the key to a quick recovery: if you do not have a humidifier, put a wet towel on the battery, spray water in the air, hold wet cleaning. Well moisturize the mucous inhalation with saline using a nebulizer.

However, medications for nebulizer therapy for use only after a doctor’s prescription. But the effectiveness of traditional methods (rubbing grease, mustard) is not proved. In addition, they can be harmful: the fat prevents the “breathing” of the skin, and thus hinders the elimination of toxins from the body. The action of the mustard is aggressive: it can cause skin rashes and sudden bronchospasm, swelling of the mucous membranes of the respiratory tract”.