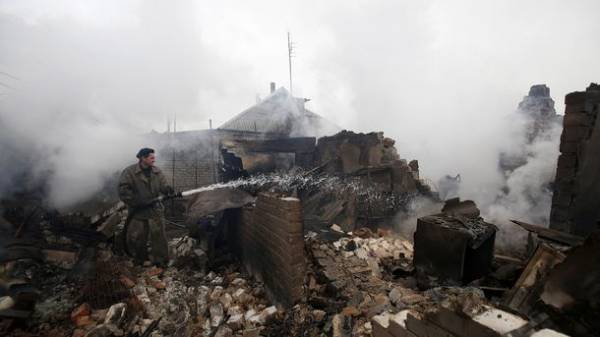 Promonova Avdeevka in the Donbas for almost a month trying to survive without normal water supply and power outages. Repair crews can’t get to restore the damaged electricity due to renewed massive attacks by the insurgents occupied the so-called “DNR” Donetsk. Although on Sunday night in the town was relatively calm, the Russian side in the Joint center for control and coordination of the conflict in the Donbass (SCCC) has not provided written guarantees of a ceasefire in the area of the next burst of transmission line.

“Without such guarantees and without the participation of the representatives of the OSCE mission electricians will not work on the line because there is a high threat of attacks by Russian fighters. Last time the electrician was shot even with written guarantees,” — said the head of the Donetsk regional military-civil administration Pavlo zhebrivskyi. Today two groups of power within the boundaries of the security zone still left to the inspection of the damaged sections of power lines from Avdeevka and Makeevka. “By evening, no guarantees from SCCC about the cease-fire appeared, and a brigade of engineers was forced to return”, — reported in the Ministry of the temporarily occupied territories of Ukraine.

ON THE PUMPS. The water in the plant is still supplied by the clock. Because of the shelling of Donetsk filtering station on 24 February was stopped by the pumping station of the city, and Avdeevka moved to the water supply of special water tanks that supply water left for a day or two. According to the Vice Prime Minister of Ukraine Gennady Zubko, water, Avdeevka residents get on schedule: four hours in the morning and six hours in the second. Monday, February 27, electricians promised to connect the city pumping station to a powerful generator from gschs of Ukraine in order to supply water to all the buildings, and primarily in school. Generators are already operating several hospitals, the telephone company and other service providing activity of the city. The State service for emergency situations of Ukraine reported that in the apartments of Avdeevka established acceptable temperature — from 20 to 25 degrees due to the operation of the heating plant Avdiivka coke plant.

The Avdiivka confirm that their homes do have heat and water. “There is no electricity, but there is everything else, says local resident Andrew Handle. — Go out on the street scary, although there is no need to sit at home. When shelled the city, not heard volleys, and only one arrivals. A shell may fall at any moment and anywhere, even to understand in no time”.

“ALREADY USED”. Despite the increased fighting, the locals say that trying to live a normal life. “It’s hard, but we are nearly three years have become accustomed. Equipped to sleep basements, each house has its own strategic reserve of water and food… In Ageevka it is considered normal, says Avdeevka Irina Danilova. — In town shops, on the streets, you can see children playing and mothers with strollers. In the old part of the city people continue to live in dilapidated houses, despite the fact that there is a probability of arrival of the projectile is very high. There, even the volunteers are not always willing to come because of danger to life, and people live”.

Volunteers urged Ukrainians not to transfer to Avdiyivka products. “The city is littered with help from concerned citizens. But the residents of Avdiivka need now is a building materials, heaters and medicines than canned pickles and cookies, says volunteer Anna Gusarova. But to all who had responded to the distress of the Town, kowtow and from us, and from residents of the city!”.