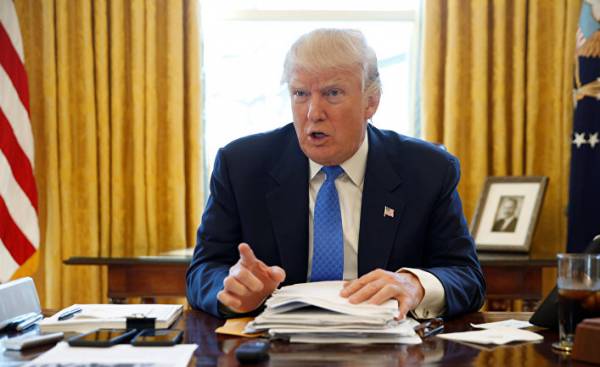 The participation of Vladimir Putin to win Donald trump is the subject of speculation and investigation, but ultimately it cannot be measured. First, trump was new, unburdened by rival familiar opponent from the Russian side. His unexpected victory has deprived Moscow for a short time, sort of an American scapegoat, which was supposed to distract from the problems in their own country. For this, perhaps, could open the chance for a “deal” and the weakening of Western values and institutions. In that measure in what is now a global deal between Putin and trump becomes less likely, in Moscow on the first plan put forward, again not the most positive qualities of the American.

Alone the prospect of a joint struggle against terror original Russian admiration for trump not to explain. Billionaire from new York was hailed as a Savior and deliverer who will do it differently and well. To this was added the Moscow performance, which, perhaps, not foreign to Trump: strong men decide among themselves the fate of Nations and people. The Yalta agreement of 1945 between Stalin, Roosevelt and Churchill it looks like the mother of all deals. Because it corresponds to the division of the world into “spheres of influence”, which was a Central theme of Putin’s policy in previous years, with the post-Soviet space as a strategic object of the Russian world power and as a buffer zone against the West. Putin wants to weaken NATO as a military Alliance and to ensure that was recognized the annexation of Crimea and the significant role of Russia in the middle East, conquered in the fighting in Syria.

How realistic is the implementation of such a wish list has always been doubtful. Meanwhile, from the Russian point of view for skepticism is more reason for optimism than. Russia needs higher oil price. However, trump wants to increase American oil production and abolishes the limitations of its predecessor Barack Obama. Moscow — an ally of Iran, despite the rivalry in Syria. Trump, by contrast, wants to limit Iran and nuclear agreement to conclusion, which also involved Russia, was called “a bad deal”. If trump wants to forge with Putin a joint coalition against Islamist terrorism, it would have to decide the issue of Assad’s regime, Moscow’s ally in Syria.

The fear of the American policy of arms buildup

Trouble threatened in the area of nuclear weapons. The Russian government has already rejected the earlier idea of trump to anti-Russian sanctions be linked with nuclear disarmament. This could be more attributed to inexperience or incompetence. However, the new trump attacks against a strategic agreement on disarmament “New Start” cause a real concern. The agreement, which obliges both countries to reduce the amount of ready to use warheads and carrier systems, ending in 2021. Last summer Moscow has left unanswered the persistent Obama’s proposal to extend the agreement. At that time in the Duma believed that the negotiations ought to include missile defense system in Europe, and — as a reaction to the war in Ukraine — sending to Poland and the Baltic States four thousand American soldiers. Played poker and got trump policy in the field of nuclear weapons. Although Putin may require from their people a sacrifice, but on the arms race of money just yet. If trump wants to arm America and make her a “leader”, what comes to mind Ronald Reagan, who pressured the Soviet Union a massive arms race.

Or is it all just preparation for negotiations? It’s hard to say. But for the Kremlin this is an unpleasant role reversal. Because Putin’s trump card was to depict the unpredictable, which, if necessary, will want to escalate the conflict more and more to force their opponents to agree. With trump it is unclear whether Putin has a monopoly on this role.

The question is even about who people in General, Putin can now talk in Washington that does not fear of leakage of the contents of the conversations. This is shown by the resignation of national security adviser Michael Flynn, who was accused of telephone conversations before the inauguration with the Russian Ambassador. And now trump is trying to dissociate itself from Putin, criticized Twitter Russia, and Washington require the return of Crimea to Ukraine that Moscow would have to react angrily.

So, step by step, everything comes back to normality Russian: hostility to Washington, which can be traced back to some members of the new government. For the Kremlin will not be a problem and this manipulation to sell to domestic viewers: trump wanted a new beginning, however, saying that he was not allowed to do so. According to another version, the American President remains a natural ally of Putin. Trump’s campaign against the media and justice is reminiscent of the Kremlin’s stories, which should discredit the West and to defend the system of power in Russia. The best Putin and could not come up with.

Friedrich Schmidt, a political correspondent in Moscow (Russia and CIS)