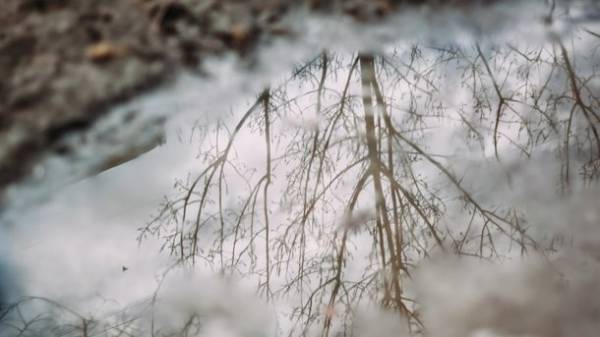 In Ukraine at the weekend will be rain with sleet, forecasters predict. In the beginning of next week in the West of the country will warm up to 13 degrees above zero. Relatively cold weather is expected in the East and North of Ukraine – from three to five degrees in the afternoon. The website “Today” found out what weather to expect Ukrainians in the next few days.

On the West of the country on 25 February will be snow, the temperature will vary between three to five degrees Celsius. Relatively warm weather in the day is expected in the Transcarpathian region – up to seven degrees above zero. Night in the Western regions colder up to two degrees below zero. In the centre and in the capital, the thermometer during the day will rise to the level of three to five degrees Celsius in the North from one to three degrees above zero. While in the North and Kiev will pass a light snow, and in the center – rain with sleet.

The South will rise to seven or eight degrees above zero. Forecasters predict heavy precipitation – rain with sleet. Sunday, according to the Reuters throughout the country will be partly cloudy weather. Relatively warm weather in the West (from six to eight degrees Celsius), the coldest in the East and North, and from one to three degrees above zero. In the South, five to seven degrees Celsius in the centre and in the capital the temperature will rise up to three to five degrees Celsius. 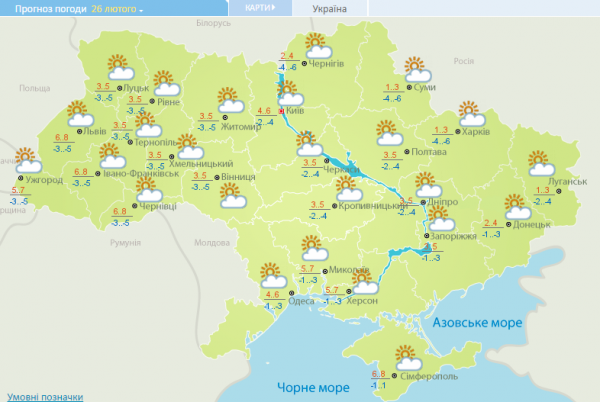 27 Feb precipitation will be in the East, in Poltava and Sumy oblasts, there will be heavy rain with sleet, the rest of the – partly cloudy. In the center and North, the thermometer will reach the mark of five to seven degrees Celsius. Relatively warm weather in the day, forecasters predict, will be in the West – in the afternoon the air warmed up seven to nine degrees above zero. 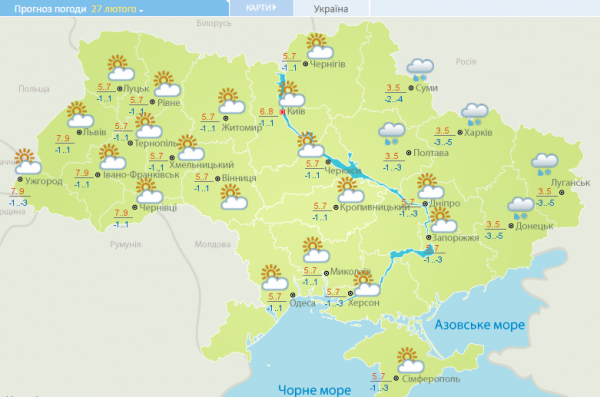 On Tuesday, February 28, in the Western regions will warm up to 13 degrees of heat, at the same time in the center and in the North the temperature will oscillate between the levels of six to eight degrees above zero. 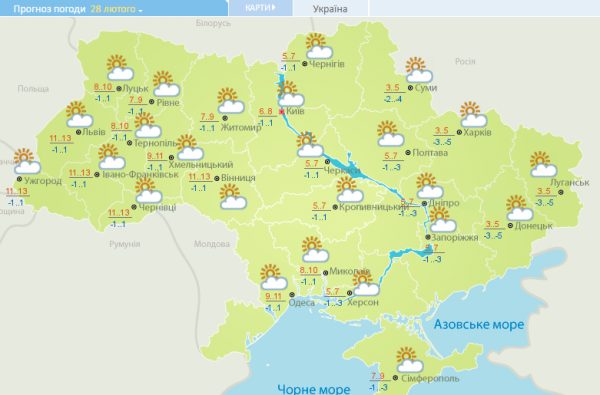 In the Eastern regions colder up to three degrees Celsius, while in the South the air will be warmed up to ten degrees above zero.

February 25, according to the portal “the weather man”, is revered the memory of St. Alexis, the Wonderworker. The people on February 25 was called the day of Alex Fish, because if this day thaw and summer will be good to be caught fish. From that day for three days exhibited on morning frost grain, intended for planting, saying that touched by frost seeds give a better harvest. If Alexei starry sky, you can expect chleborad. And Sunny day promised a good crop of apples.

February 26 marks the day of memory of venerable Martinian, “the tamer of the passions.” If this day the snow was melting, the spring promised to be good, and Vice versa, cloudy day predicted a cold and protracted spring. If in the evening of that day the moon was red, then the next day expect wind, heat, and snow.

27 Feb venerated the memory of Saint Cyril. In the old days on this day midwives took with Goodies to women from whom they took birth. In former times, noticed that the weather is nice on Cyril says that soon, probably gonna hit hard frosts.

28 Feb revered the memory of the Apostle Onesimus. If on that day the snow melted, the hay had promised to be good. In the old days said on February 28 the winter and spring begin to fight: “to move forward and who to turn back the clock”. Another said: “in February the call, so the fall will respond” — the weather that day could judge the weather in the fall.

March 1st is the day of memory of the 12 martyrs: Pamphilos, Valens, and others. In the old days said: if from the first days of spring “dissipated, don’t be shy – be fooled, to believe nothing”. The weather that day predicted thunder and wind. If on 1 March when a North wind blows, thunder are forecasted, then spring will be cold, when the East wind – spring is dry, when the West wet, but at South warm.