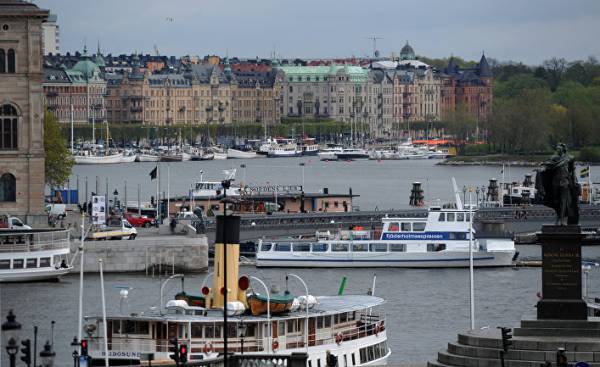 American politicians, journalists, and politicians are once again fiercely debating about Sweden. The debate is about how bad the Swedes really are, and whether the country is experiencing a crime wave due to immigration.

The additional heat added to the debate casual remark of trump, but the Swedes did not first become the object of such attention.

What is it about our neighboring country, such that it arouses such passions boiling in the United States?

Criticism of Sweden has a long tradition

Doug Blank (Dag Property), a Professor involved in the study of North America at Uppsala University, draws Parallels with the 1930-ies. Then he published a book “Sweden: the middle way” (Sweden: the Middle Way), which was destined to play a very important role.

President Roosevelt reacted to the book very closely and often referred to it. Thanks to the book, Sweden has gained a disproportionately large role in American politics, considering how small the country itself, says Blank in an interview with Aftenposten.

Democrats used Sweden as an example to follow in order to protect the “New course” Roosevelt. The conservatives responded with criticism of the Swedish model.

An avalanche of responses

This time it started with the fact that the trump on Saturday criticized Swedish immigration policy:

“What happened in Sweden last night. In Sweden! Can you believe it?” the President said during a “meeting with voters”.

No sooner had he said that, his words caused an avalanche of response: from fact-checking to parodies on Twitter, and the official address of the Swedish Embassy to the US state Department.

Trump also received a sharp comment from Prime Minister Stephen Leuven on the subject of that “all should be responsible for the accurate presentation of the facts”.

But in the conservative media, has long been having a grudge against our beloved brother, “Swedish history” has caused the opposite reaction:

“Perhaps trump was not quite clear, but Sweden will experience a wave of violence by immigrants,” insisted Fox News on Tuesday. Conservative TV channel repeatedly has used Sweden as an example of everything negative that can lead to large-scale immigration.

“Sweden — a country that right-wing forces in the US for many years used as an example to intimidate”, — says a consultant on public relations and analyst Elizabeth Wicander (Elizabeth Wikander).

She grew up in USA, but now lives in Sweden.

“Sweden is portrayed as a country that has gone too far and now suffers from it. This assertion rests on the old idea of Sweden as a socialist state, which is much more to the left than it actually is”.

“Baiting” Sweden has a long history

“You can see that in the speech of President Dwight Eisenhower at the Republican Convention in 1960,” says the Professor working at the Institute of Ersta Sköndal högskola Bräcke.

The American President cited Sweden as an example of the socialist state, which decays due to its policy of welfare, tells Treguard.

“Swedish Prime Minister didn’t like it, he tried carefully to notice that perhaps what the President said is not quite true. We would inform about what’s going on, so it was said. Almost as a reaction to trump’s words today,” said Blank.

During the cold war, the front between East and West was the border between socialism and capitalism. Sweden and the Scandinavian social Democrats were often considered to be a socialist, explains Tregard.

“It has been preserved to our days”, — said the Professor.

They feared the mystery of “swedishly” Obama

The last time Republicans and conservatives actively prevented Sweden from mud after coming of Barack Obama to the White house in 2009. It was alleged that the agenda Obama was a “secret swedenization” of the United States.

“In the course of active discussions on health care reform, started by Obama, “right” and Fox News said: “We do not want to see this in the US, we don’t want to become like Canada or Sweden.” “Left-wing” Sweden defended,” says Blank.

“They do not care about Sweden itself, they want to use us as an argument in the political debate. In the discussions in Sweden, States often play a similar role,” he adds.

The debate about Sweden unleashed a financial crisis

Another important reason why Sweden at this time was in the heart of the debate was the financial crisis. The collapse of the banking system and the automotive industry has led to the fact that at some time the American authorities have taken control of several large companies.

Many economists, particularly Nobel prize winner Paul Krugman, after the banking crisis in the 1990s called “the Swedish solution” possible role model for the United States.

The attacks on the Sweden has taken such proportions that the Minister of Finance Timothy Geithner was forced to reassure worried Americans that to transform the US into Sweden is not planned.

When the former Minister of Finance BU Lundgren came to Washington to explain how the Swedes allowed a private banking crisis, us politicians have decided not to communicate with him, “to avoid being associated with socialism”, according to ABC.

All the time that Obama was President, the ultra-conservative media remained the suspicion that its true aim was to turn the United States a “great Sweden”. When Obama visited Sweden in 2013, conservative Washingtоn Times wrote that the President “bent over backwards to praise Sweden, unlike the United States.”

Professor-historian Lars Treguard thinks that the American “right” are closely watching what he calls “the Swedish and the German experiment with the refugees.”

“At stake here is much, it is also about the struggle for moral superiority. If it so happens that the Swedish experiment ultimately fails, it will be a powerful argument against the policy advocated by Donald trump,” — said Treguard.

The historian believes that all this will have a greater effect in the debate in Sweden than in the US.

“What trump says is not unfounded. The problem is. And it is possible that this will lead to more active debate in Sweden,” says Treguard.

Blank believes that most Americans know about Sweden not so much.

“They often confuse us with Switzerland. Perhaps the many well-known ABBA and björn Borg. Volvo European car, and IKEA proved their Swedish names of the furniture and Swedish letters. Maybe at least this can be seen as something positive?” — asks the Professor.