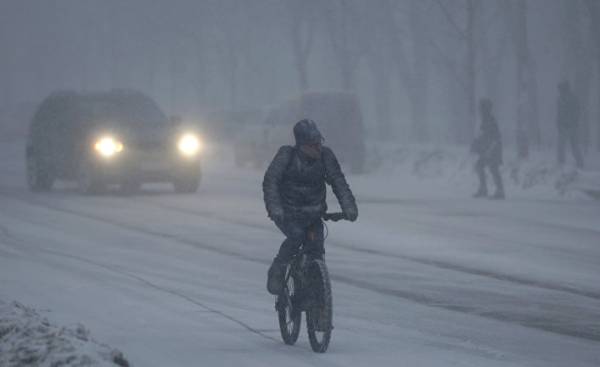 Disappointment, distrust and pessimism. These three words reflect the mood of the Ukrainians on the third anniversary of the events in the Ukrainian Maidan, the sociologists, the results of numerous opinion polls. But do Ukrainians have reason for optimism?

A poll by the Razumkov Center conducted in December last year, however, according to Director of sociological service of the Center Andriy Bychenko, this trend of negative perception of reality is observed in Ukrainian society for a long time and does not change significantly.

He notes that the level of distrust in the political class and, in particular, by the President greatly exceeds the level of trust. However, Bychenko indicates that the situation is not unique — the dynamics of public sentiment is repeated.

“History repeats itself. So when President Yushchenko in 2005, and then for Yanukovych in 2010 and now for President Poroshenko in 2014: first, the surge of confidence in the government, then in the absence of tangible results — the level of trust is critical drops,” said DW Andriy Bychenko. He points out that at the moment President Poroshenko trusts only 23.8% of Ukrainians do not trust — 69%.

However, according to him, the results of the sociological survey indicate that most Ukrainians trust the Church, NGOs, volunteers, representatives of volunteer battalions, army, border service and national guard.

Sociologists note that Ukrainians do not feel progress in implementing reforms. According to the independent analytical platform VoxUkraine, monitor the implementation of reforms indicates that positive shifts in this direction almost does not occur. For the period from 23 January to 5 February 2017, the index value was + 0.4 points (from -5.0 to +5.0). VoxUkraine analysts note that such a low index is due to the fact that there were only isolated measures in specific industries.

Also, according to the expert survey conducted by Fund “Democratic initiatives” name Ilka Kucheriv, the progress of reforms in Ukraine, the experts evaluated by 2.52 points out of a possible 5. “Something is being done: the implementation of the public procurement system Prozorro, electronic Declaration, patrol police. But in the main direction, which is the fight against corruption, is very little. And people see it,” says the Director of Fund “Democratic initiatives” Irina Bekeshkina.

Also, according to her, the experts are more optimistic assessment of the situation with reforms than the citizens themselves. This is confirmed by the results of a public opinion poll by the Razumkov Center, where Ukrainians assessed the progress of reforms. Out of 10 possible points, even 5 points is not received none of the reforms.

Positive developments the citizens of Ukraine see only in the sphere of defense, said Andriy Bychenko of the Razumkov Center. Also, according to him, 61.2% of Ukrainians positively assessed the introduction of electronic Declaration of assets and income of civil servants.

Thus, according to the Fund “Democratic initiatives”, 19% of Ukrainians believe that the West played a positive role in promoting reforms in Ukraine. In addition, the locomotive of reforms in the country, respondents cited the scientists, the government and the President. Sociologists point out that 35% of the population said they are willing now to suffer a decrease in level of his life for the sake of the ultimate success of the reforms.

In anticipation of the world

According to sociologists, Ukrainians concerned about the end of the armed conflict in Eastern Ukraine. But consensus vision of the state policy in relation to uncontrolled Kiev territories in society there. According to the poll Fund “Democratic initiatives” name Ilka Kucheriv, 27% of Ukrainians favor a return to the prewar status quo.

To admit the territory as “occupied” and to limit communication with them want 17% of Ukrainian citizens. 14% of respondents agree to a special status, preferences, self-government for the termination of the conflict in the Donbass. Another 14% believe that the government should maintain the current policy, and every fourth Respondent has no answer to these questions.

“Now people are more concerned about peace in the Donbass, the growth of the economy and their welfare. But there is no improvement. Even if the government claims a growth of 1-2% of GDP, no one sees the positive, because in 2014 the Ukrainian economy collapsed,” explains Irina Bekeshkina.

Positive only on holidays

“Respondents noted that they began to save more on clothing, food, medicines. They point out that the deterioration of their financial position is affected by events in the East of Ukraine, the increase in prices, increase in utility tariffs, corruption,” notes the analyst of Research & Branding Group Alexey Lyashenko.

According to him, the index of social optimism of Ukrainians are now 18 points out of a possible 100. “People have no confidence in the future, so there are no special reasons for optimism,” says Lyashenko. He notes that 41% of respondents do not believe that next year will be better than now. According to him, the surge of optimism among Ukrainians sociologists observe annually in December and may. It was during these months in Ukraine most weekends and holidays.

An American who has visited every country in the world, shared his impressions about Ukraine