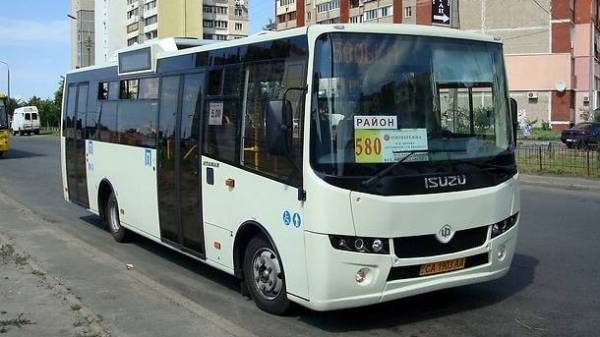 In early January, residents and suburban residents were outraged at the bad news — another rise in price of travel in city and regional buses. Residents of the suburbs, where the fare is increased by 3, the hryvnia, has announced the private carriers a real war. People began to block roads, demanding from the authorities to reduce the price of travel, to let modern beads or to opt out of the bus.

“Today” decided to recall the price of admission was in the previous years and what route the beads traveled through the roads of the capital and the world.

GHAZALS FROM CLOSE TO THE “ATAMANS” WITH AIR CONDITIONING

In the 60-ies of the inhabitants of Kiev received a new form of transport — taxi. The first road on the left beads of RAF-977 “Latvia”. Despite the low class of car and the fare is 20 cents (the subway token was worth 5 COP.), the bus was popular, went to remote areas. By the end of 80-ies in the capital have been 28 routes (62 per minibus) and travel for 15 cents, and Rafa was replaced by a newer model. They lasted until the collapse of the Soviet Union. 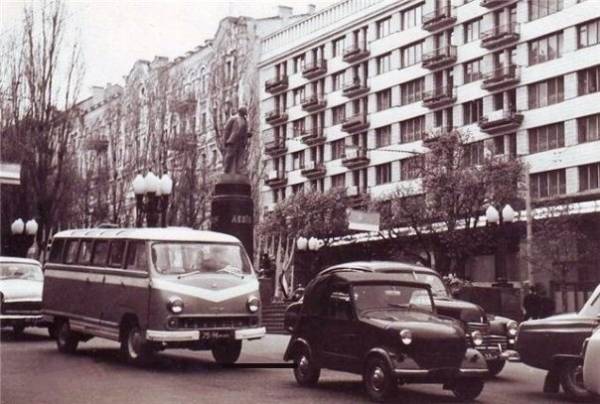 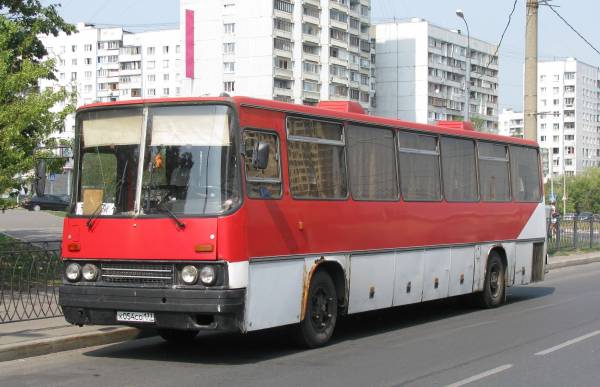 YELLOW GAZELLE. The revival of buses as an additional means of transport with a new force began in the mid-90s, when public transport was going through hard times. In 1996, as of minibuses on the routes dropped even large buses LAZ and Ikarus. In 1997 appeared the first private carrier “Avtosvet” who filled their yellow “Gazelle” (approximately 200 buses) – all Kiev. Their fare was 50 cents. One fit 12-13 people, only on the seats but the passengers managed to ride standing up, bent double. 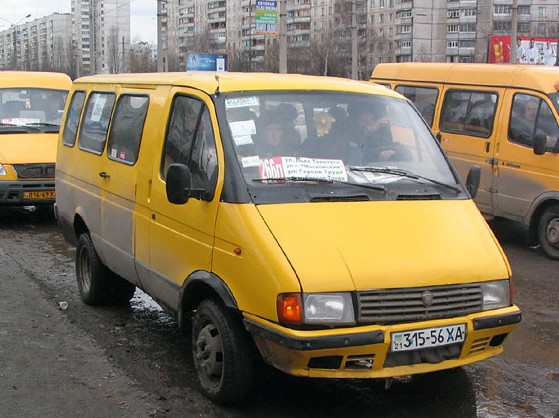 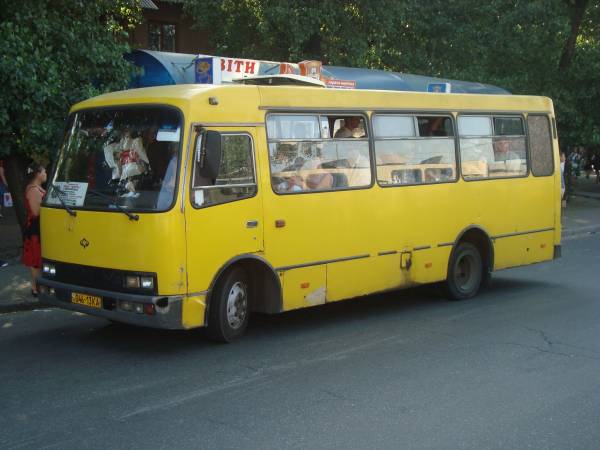 FOREIGNERS AND THE “DOLPHINS”. To solve the problem of discomfort trips helped “native” and familiar to every passenger of the first “Bogdan”, and later Base — “Dolphins”, so named because of its funny appearance. In them it was possible to ride standing up! These vans ply as taxis and to this day in different cities of Ukraine. In the early 2000s, as the shuttles began to produce beushnye German “Mercedes” and the French “Peugeot”. Imported beads stayed on the trails for long, and soon they were replaced by more modern “Bogdani”, Sasami and Bases. 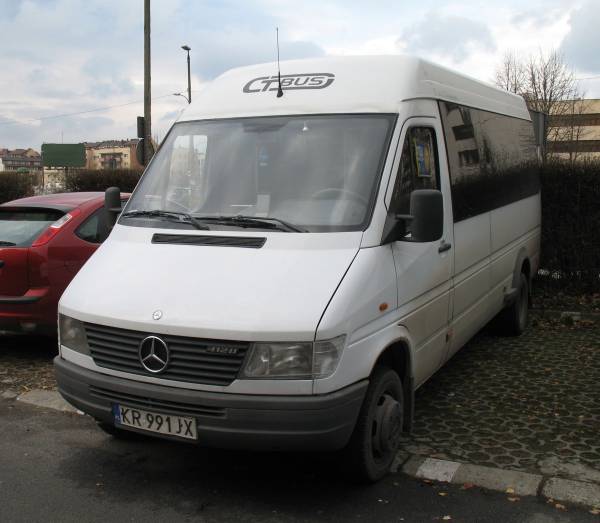 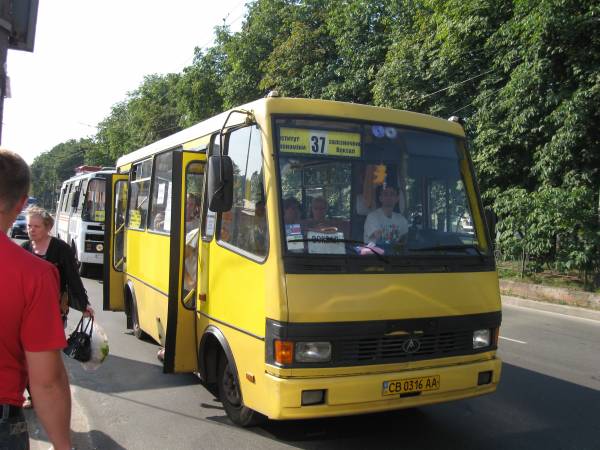 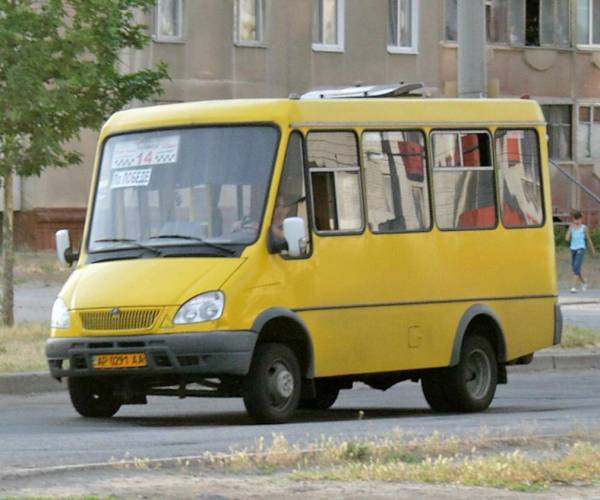 THE BOOM IN TRANSPORTATION. According to the Director of the company perevozchika “Polytech Auto” Nikolay Batsan, boom taxi occurred at the beginning of the 2000s. “public transport was still in decline, and the bus performed the main transport function, dawasa passengers to metro stations. In the capital there were about two hundred private companies-carriers is five thousand marshrutok,” says Batsan. In the middle of the two thousandth national love to the shuttles began to fade. Carriers have raised the price of admission from 50 cents to 75, and later to two hryvnia, and the passengers complained about the poor technical condition of buses, frequent accidents and lack of professionalism of the drivers. The authorities began to declare that it will eradicate taxis in Kiev, they say, as dotransport they are not needed. Officials have tightened requirements for carriers, and many companies began to close. 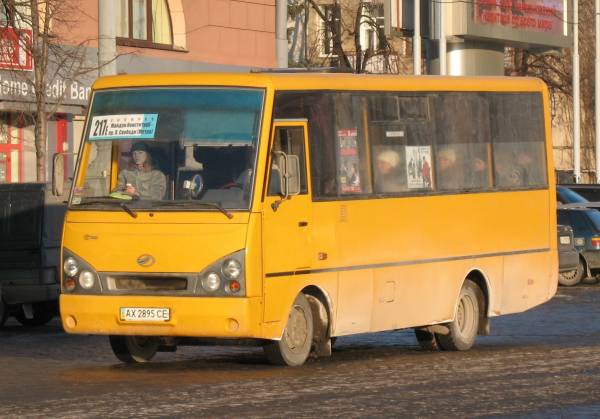 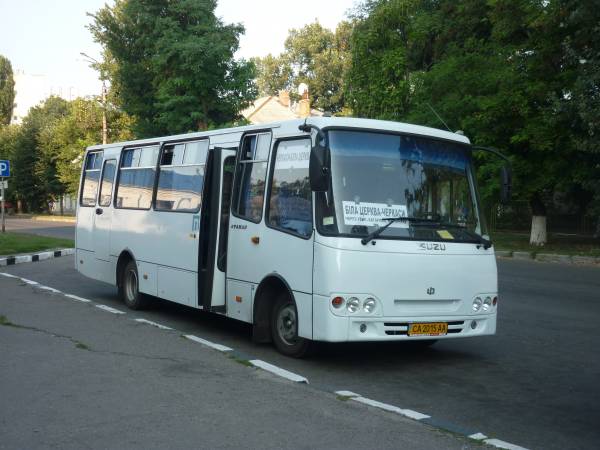 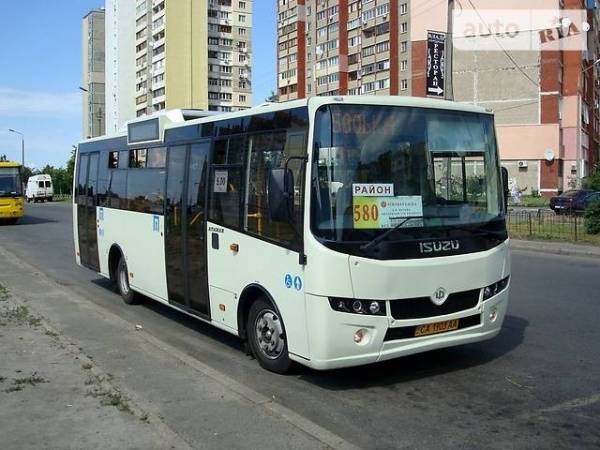 IN THE FUTURE. Now in Kiev there are 30 private carriers and two thousand units of rolling stock. And apparently, they will still be transport of Kiev. To replace the outdated “Bogdanom” started to come modern “Chieftains” of the standard of Euro-5, equipped with heating and air conditioning, low floors, a wheelchair and led Board front and side of the bus. “Europe has a long drive the transport of Euro-6. It is a modern, safe and environmentally friendly beads. Sooner or later we will move on to European standards,” says Batsan.

LEGEND: GAVE CANDY AND A SMILE

The most famous bus driver remains resident of Kiev Alexander Ostapenko. He always sat behind the wheel in full dress — suits and ties-butterflies, frock coats, top hats and white gloves. Passengers Alexander was handing out candy, spent a brief excursion during a trip, read poems, in the cabin of his bus was always perfectly clean, and at the entrance was hanging a clock in the shape of a heart and a small mirror so the passenger could correct hairstyle. However, the route the driver had to go a few years ago — the employer somehow did not like “a theater in bus”. Now the driver in the butterfly works as a janitor and in films, but his image does not change. Even sweep the streets Alexander comes out in a white coat and gloves. 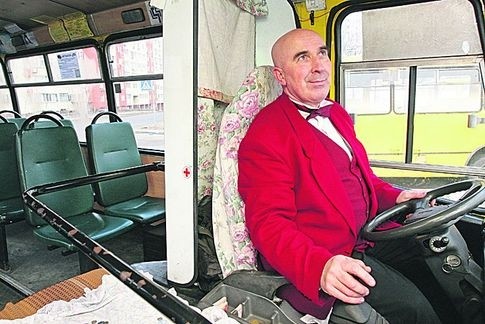 At work. Alexander Ostapenko was always in full dress

Left their mark Ukrainian bus even in the movie. In the last scene of the famous Soviet movie “the Caucasian prisoner” when Shura sees Nina, you notice an unusual white and blue taxi, braking at the curb. Role of the bus in the movie “played” minibus “Start”, released on the basis of Severodonetsk auto repair in the 60-ies of the last century. The car (first instance) had a three seat sofa, two along its body and one transverse. About 10 “Starts”shuttles running around the streets of Severodonetsk from 1968 to 1976, and during the holiday season carried workers of a local chemical plant in the tourist center of the Crimea and the Azov sea. 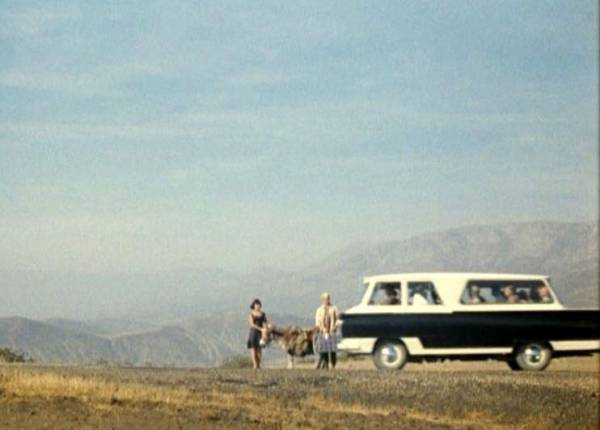 Removed. “Start” appeared in the last frame of the famous film 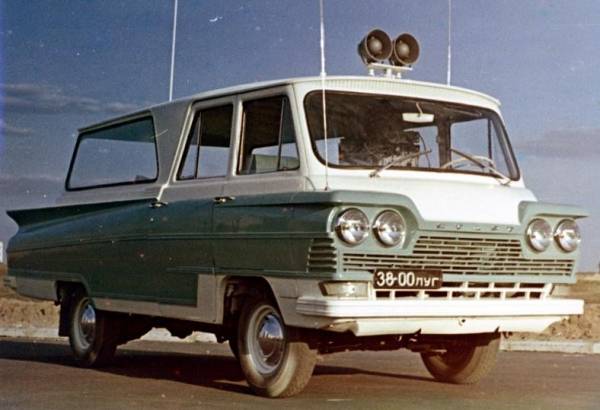 Minibus. For eight years he worked as a bus in Severodonetsk

The world’s first bus appeared on the streets of Los Angeles (USA) in 1914. The driver of the Ford stopped at the tram stop and offered waiting passengers to ride on the route for 5 cents. A few people agreed. So, at every stop someone came out and someone sat down. The success of the new mode of transport, popularly known as “Jani” (from the surname of a famous contrabandista who sold tobacco at 10 cents, getting fat in 5 cents), was phenomenal and by the end of 1914 on American roads has cruised 700 minibuses. 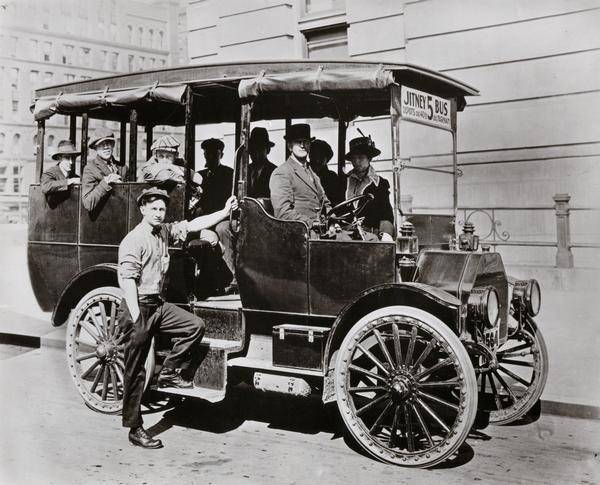 USA. The first taxis appeared in 1914

5 CENTS. The first bus had only three seats and lots of standing passengers. Later, under the carriage began to change the truck to fit more passengers. Automakers quickly realized that the “jitni” the future and began to offer carriers the car from the passenger bodies. A new form of transport was a serious competitor to the owners of the tram companies. But to displace “jitni”, whose slogan was: “we’ll Take it where necessary and leave it at any corner” — was almost impossible. A small bus transported the people of distant black areas, where there is metro and tram lines. Finally overcome “jitni” transport companies was only in the late 1920s. the Government required private carriers to have insurance and an expensive license, and illegal immigrants were fined and even imprisoned. “Jitni” could not compete with large transport and gradually left the market. Today in the U.S. taxis can be seen on the road from new York to new Jersey, Atlantic city and in several cities. But somehow American “jitni” gave impetus to the emergence of minibuses around the world. 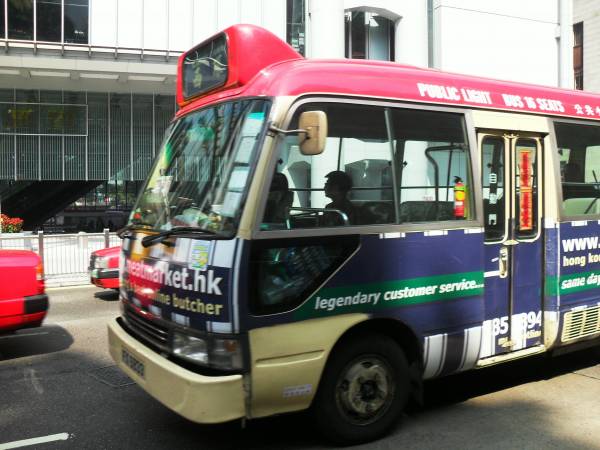 WITH CLAPS AND FLOWERS. One of the most original minibuses travel the roads of Haiti. They are called “tap-taps”, and their fare is 40 cents. In the bus there is always a greeter who gives a sign to the driver, slapping on the body of a car, which means “to stay” or “go on.” The buildings of the “tap-taps” are painted religious quotes, slogans, colors, portraits of famous people. Special color color of mashrutka in Hong Kong. Beads with a green roof go on fixed routes, and accepts no surrender, and red minibuses run throughout the city, and to pay them the fare you have when you exit. In salon of the bus fits about 16 people. Prerequisite trip to wear seat belts. When all the seats are occupied, the driver takes the passenger cabin. 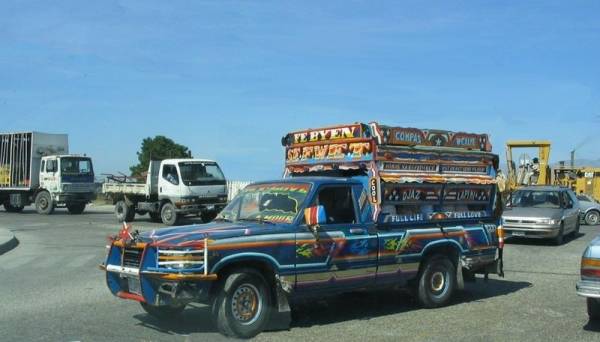 “FOREST TAXI”. Less comfortable bus in Laos. The role of buses here perform three-wheeled motorcycle with a roof and benches instead of the trunk. They are called “taxes” or “jambos” and can accommodate from four to 12 passengers. The fare is “so-taks” you have to haggle with a driver (from $1). In West and Central Africa on forest roads romp, “forest taxi” (from 17 cents). Need to rework transportation vans, placing in the salons of benches for passengers. Doors in these beads is either not closed, or they do not. Often the conductor of buses to insure passengers, becoming at the exit so no one fell on the road. 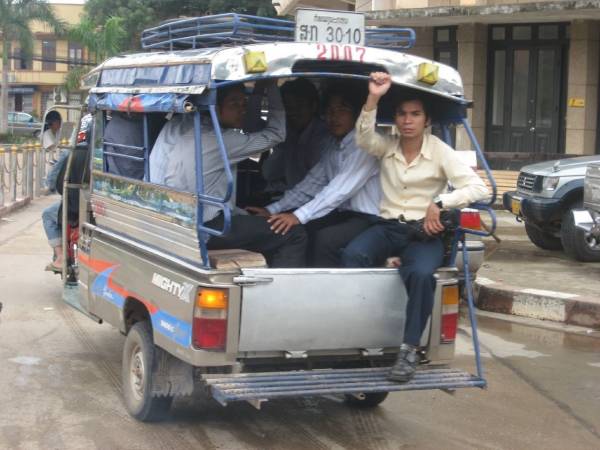 WITH THE INTERNET. In Riga (Latvia) about 250 buses daily ply on 37 routes and are very popular, despite the high fare of 2 euros. Riga the beads are a little different from the Ukrainian, except that they have free Wi-Fi. In Berlin the comfortable Renault and Mercedes use on night trails. The fare passengers pay through the validator installed near the driver. By the way, stop at these buses the passengers are not shouting, and click on the button labeled “stop”. 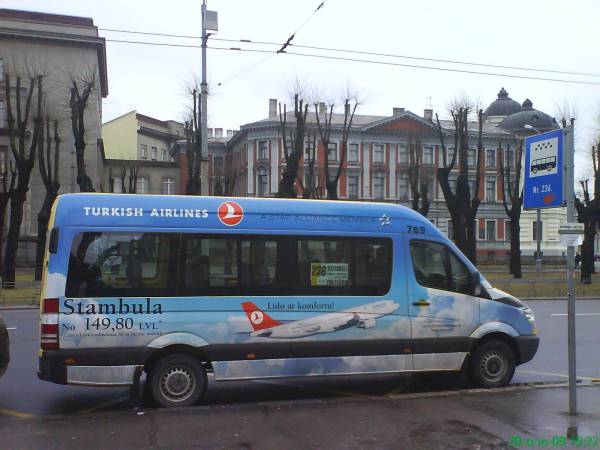