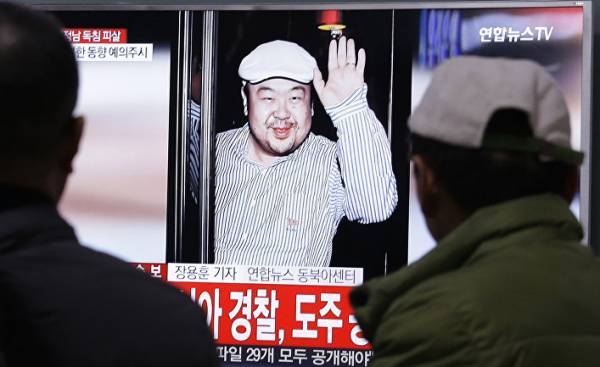 Friends-suspects are killed at the request of the leader. In Russia, Boris Nemtsov, was murdered steps away from the Kremlin.

In the book “From Russia with love” writer Ian Fleming is like a spy James bond to be killed by Soviet intelligence, to his death, accused the London. This should cause a split in the country. In the book things will turn out otherwise in the literature are not so brutal rule, as in reality. There’s consequences of death never controlled in power by the killers.

Kim Jong-Nam, half-brother of North Korean dictator Kim Jong-UN, was assassinated at the airport limitless Malaysian metropolis of Kuala Lumpur. First it was said that he was killed with poisoned needles, and later that of a handkerchief, impregnated with the poisonous substance. The killer is likely a young woman (or two, as other sources say), which is now, not too slowly, wanted by the police. Kim was waiting for a flight to Macau, a former Portuguese colony, where casinos and prostitutes, where the ancient Catholic Seminary of St. Joseph. When it seemed that Kim Jong-Nam has to inherit power after his father Kim Jong-Il, but the benefit received by his brother, Kim Jong Nam took refuge between Beijing and Macau, becoming an important source of information for the patron to Pyongyang China. A few days after testing missiles in North Korea until a new President trump tried to mend relations with Prime Minister Abe of Japan, the death of Kim Jong-Nam re-creates the atmosphere of panic, and no “happy ending” in the spirit of agent 007 is not expected.

If the regime in North Korea uses nuclear weapons to threaten America, this brutal murder sends also a signal to Chinese President XI Jinping (one person, Jang song-Taek, Kim’s uncle, was killed, and sentenced to death). So, again, in the digital age, in the policy rules dictate thugs, as a sect of assassins in Persia in the time of the First crusade. North Korea indiscriminately destroys friends and enemies, other the strong of the world already know that blood can be spilled with impunity, and in the twenty-first century.

The list of former allies, friends, people close to Russian President Vladimir Putin, whose life was cut short in a brutal and mysterious circumstances, fills a whole page in Wikipedia. Those who managed to stay alive, as the former oligarch Khodorkovsky, sentenced to a lengthy term in prison, living in their usual daily alarm: security, no food unverified, suspicious attitude to strangers. Polonium, which, along with other poisons were tested on prisoners in the Moscow experimental the dungeons of the KGB under Stalin, killed former KGB agent Alexander Litvinenko in 2006: some colleagues of Putin opposed his methods (live American TV channel Fox in the early days of President Putin’s trump called “killer”). They “removed” one by one. Among the dead are dissidents — this list is not yet complete — the journalist Anna Politkovskaya and former charismatic political leader Boris Nemtsov, who was killed two steps away from the Kremlin. The world chess champion Kasparov, opponent of Putin, lives, taking a lot of precautions.

Photo of 2016 became the of Burhan Ozbilici Agency The Associated Press, which emphasize Altintash with still Smoking after firing the gun, shouting “Allah Akbar!” he killed the Russian Ambassador in Turkey Andrey Karlov.

As did his fellow-murderers in Russia and in North Korea, Altintas knew that the death of Charles is not going to change the course of history in contrast to the murder of Rabin, Sadat, Gandhi, Moreau, Martin Luther king, Malcolm X, the Kennedy brothers and of Archduke Ferdinand. But he knew that instantly flying on the social networks, the panic will bring his dark message to the remotest corners of the planet.

It knows and the woman — whoever she was — who poisoned Kim Jong-Nam, an avid lover of gambling, was first detained in Japan just because he was trying to get to Disneyland, traveling with a fake passport. Rule disney cartoons (with the exception of which is Bambi’s mother): no one dies forever. Maybe that is why Kim wanted to visit the country fantasy, born in the land of the killers, the iron rules which start to operate in less harsh, as we vainly hoped, times.