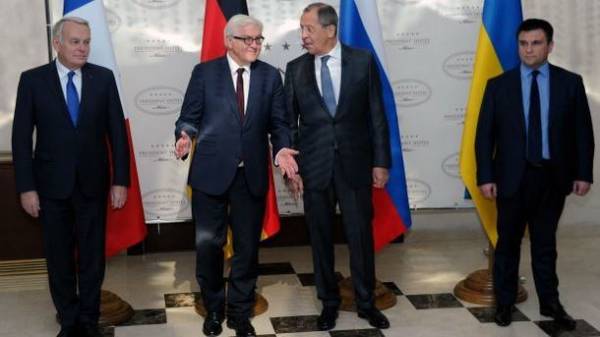 The foreign Ministers “Norman format” meet in Munich for the security conference, where he will discuss the worsening of the country and the withdrawal of heavy weapons in the Donbass. This was stated by the representative of the foreign Ministry of Germany Sebastian Fischer, reports UKRINFORM.

“The Minister for foreign Affairs (Germany – ed.), invited his French, Russian and Ukrainian colleagues for a meeting in “Norman format”, held in the framework of the Munich security conference,” said Fisher.

He noted that the main topic of the meeting is to discuss the question of aggravation of the situation in Avdeevka and cease there attacks and will raise the issue of withdrawal of heavy weapons from the frontline in the Donbass.

In addition, we will also discuss the Minsk agreement implementation and next steps.

As was stated by the President of Ukraine Petro Poroshenko, Minister of foreign Affairs of Ukraine Pavlo Klimkin will participate in the meeting with the foreign Ministers of the countries of the “Normandy format”. According to him, Klimkin will bring to their foreign colleagues position on the impossibility of holding elections in Donbas gunpoint.

In turn, Moscow has also given the nod to participate in the meeting, initiated by the German and French sides. Russia expressed hope for the achievement of results following the meeting, “Norman Quartet.”