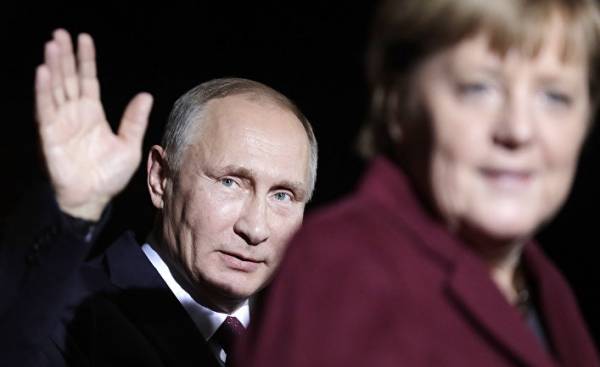 Since the time of the presidential elections in USA, in Germany there is a growing understanding that Russia will actively intervene in the parliamentary elections this year. Already there are clear signs that the Kremlin is trying systematically to influence the political situation in the country. Moreover, as emphasized by the President of the Federal intelligence service Bruno KAHL (Kahl Bruno), the goal is not necessarily to help defeat a particular candidate or party: “the criminals are interested in that to deprive the legitimate power of the democratic process itself. No matter who it is then will help.”

The debate about how best to protect our democracy from such attacks, too late. We need a large-scale security strategy, which will make transparent Russian intentions and the ability to influence elections in Germany and protects against effective impact.

The upcoming elections to the Bundestag give the Kremlin the ability to mix the entire German policy, what would upset the ability of Germany to build a collective and action-oriented values of the West policy in relations with Russia and other countries.

These methods are in many ways reminiscent of the methods that the secret service KGB and the secret police of the GDR used decades in the West. If Moscow carries out a step strategy:

· First, you need to weaken Angela Merkel (Angela Merkel). The German Chancellor after the election Donald trump (Donald Trump) becomes the main opponent of Russian President Vladimir Putin in the West. Russian strategy aimed to discredit her during an election campaign. As a result of this discrediting in their own country the weight and influence of Merkel reduced in Europe and the world in General. Together with the Chancellor of the direct attacks of the Kremlin can be a single criticism of the Kremlin among the green and the social Democrats.

Secondly, we can also add a wide fragmentation and polarization of the party landscape. This, primarily, is aimed the support of the party “Alternative for Germany” (AfD) on the right wing, and loyal to Putin left around Sarah wagenknecht (Sarah Wagenknecht). This segregation questioned, according to the anticipated settlements of Moscow long-term stability and effectiveness of each of the new Federal government.

Third, we should expect that the Kremlin would cast doubt on the election itself and thus try to deprive the legitimate power of the election results. Will attempt to implement analogue of the strategy of trump, to introduce the chaotic election, or election, manipulated by the political establishment to undermine the legitimacy of democratic forces.

This multi-level Russian influence on elections in the Bundestag has already been fully implemented. Therefore, it is necessary to quickly carry out a number of measures to limit the damage:

First, Germany needs to solve the problem as transparently as possible and very carefully. This is not least the lesson of the US presidential election, where the mixture of indecision and complacency led to the fatal defeat of the democratic process. Instead, each attempt to exert Russian influence, be it false information, personal attacks on political actors, cyber-attacks on technological infrastructure or covert support for the election campaign, had immediately become public knowledge and be stopped by the police or legal action.

Second, you must have a clear agreement of all democratic parties not to be opportunistic to the Russian intervention in the hope that it will damage only a political enemy and improve their own electoral prospects. The unity of the electoral process and the legitimacy of Parliament and government is required for all and must be protected all together. Accordingly, it is necessary that all parties immediately agreed to condemn every attack and every intervention in the election campaign regardless of whether the affected or can benefit from.

Third, the party must not let Russian disinformation and Russian intervention to distort the content of his election campaign. International issues, including Russia, should not be excluded completely, but the main emphasis should be on domestic issues and society. Social justice, internal security, integration, education and infrastructure are the main issues for voters and the key competence of the democratic party. The latter should accordingly focus on such content.

Fourth,the election campaign should primarily concentrate their efforts where there is a clear potential for protest voters. Instead of staying in their comfortable political zones, and to give entire cities and villages populist liars, the democratic party needs to bring greater territorial coverage. In this case we should talk not only about how to mobilize votes for their own party, but that democratically-minded citizens went to the polls. Here you can also think about to this decision was accepted by all parties.

Fifth, Federal policy and debate needs to be greater than before the degree is devoted to the Russian-speaking community in the country. The strong influence of Russian state media in this large group of the population politically explosive and is an obstacle to the integration of Russian-speaking citizens. In relation to this group especially requires special efforts both from the democratic party, and the social and legal media. The information supply in the Russian language for this community, reinforced by an exchange of views with her and inside of her, as well as careful observation of the attitudes of Russian-speaking citizens can, at least, to limit the strong influence of Moscow.

Sixthly, all of the democratic party should urgently strengthen its presence in social networks. So far, the only Alternative for Germany is the only political force that systematically exploits the potential of these media and their equipment. Therefore, she alone has almost as many supporters in Facebook as all the parties represented in the Bundestag. In addition to a small group of responsible individuals, their time to this work, it is necessary to have professional help — first of all, from the young and technically trained party members and their supporters. The democratic party needs to be able at least to respond in social media to the attacks of undemocratic players having a strong presence there.

Seventh, the government and the media need to intensify their activities for disclosure of the misinformation campaigns and attacks. A number of European States have already responded by establishing special systems. And in Germany has just begun the relevant debate. In this regard, the media need more technical and human resources to defend themselves against manipulation in cyberspace and to examine these manipulations. In the future, taking into account the lack of media resources, this task can be performed using a combined group of researchers and a system of verification of the facts. But as the first steps you need to quickly find somewhere in other places in Europe ready expert group.

In General these and possible further steps are nothing but an attempt to adapt to the current conditions of the defenses of democracy, which for decades has so well served the Federal Republic and Europe. What is needed, shown by 2016, so difficult for the open societies of the West.