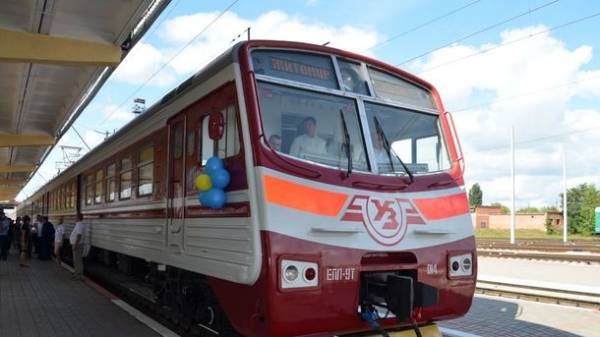 Ukrzaliznytsia annually reduces the number of wagons and reduces the frequency of operation of trains to extend the service life of the trains. Why worn out suburban trains reached a critical level and is it possible to save them, learned “Today.”

Trains unprofitable, and money for the new no

Commuter trains in the country are worn by 85-97% – they are all made in 60-90 years of the last century. The only transport in the normal state – raked buses, but they are in the country only 14. According to the law on railway transport, to buy and renovate the trains have “uz” together with the cities. But local budgets for 26 years money was not allocated never, as the funds of the railway workers is not enough, says the head of the Department of suburban passenger transportation “Ukrzaliznytsia” Volodymyr Skoblenko. Over the past 16 years, the Park has decreased by 52 of the carriage 44 and diesel trains. Because of this, the commuter trains have declined from 10 cars on route to the eight-six, and on some routes the travel of the train of four cars.

“The pace of ageing of the Park of electric and diesel trains are far ahead of the pace of its updates. Since 2009 not bought any electric trains for suburban communication” – says Vladimir Skoblenko.

According to official data, the average age of trains reached 33.5 years, and the number of passengers-beneficiaries – 80%. Ukrzaliznytsia also notes that electric trains in 2017 will continue to operate in their areas: “Cancel routes in 2017 is not planned, but there are cases of cancellation of suburban trains for a few days due to maintenance works”. After the exhaustion of the period of work train sent for overhaul. In 2017, the railway workers are planning a major overhaul of 10 electric trains of the suburban message.

To extend the operation of trains, the company, as before, will change the frequency of supervision, and to limit routes and reduce the number of cars in trains, according to “Ukrzaliznytsya”.

Who needs to buy new trains

“Given the unprofitability of commuter traffic, the regional division of “Ukrzaliznytsia” are constantly working with the Governor on increase of tariffs for transportation of passengers,” – noted in the Department of suburban passenger transportation companies.

But the budget has never allocated money for a new commuter trains, according to the company. According to the former Deputy Minister of infrastructure Alexander Cava, in Europe trains are purchased at the expense of state and local budgets.

“In Ukraine there is no alternative but to start buying trains for the budget. For example, Germany in its Railways in the year allocated 10 billion euros, which are to cover benefits for passengers, for the purchase of new trains and infrastructure,” he says.

In the Dnipropetrovsk regional state administration told us that the regional budget could not allocate money for Ukrzaliznytsia, as this is prohibited by the budget code. Expert with budgetary matters of the Association of cities of Ukraine Igor Onischuk confirms that indeed public funds were to flow the money to the subsidiaries of “Ukrzaliznytsia”, but at the expense of subventions from the state budget.

“Earlier there was a subsidy for the purchase of new cars and trains. But it is very long been abolished,” – says Igor Onischuk.

But there are problems within the “Ukrzaliznytsya”. Registration of passengers is almost non-existent. According to Oleksandr Kava, only 35% of those who have to pay the fare, buy a ticket, the rest of – “hares”. Because of this and heavy losses. 100% payment only on two stations – suburban “Kiev-Passenger” and “Darnitsa”, which features the turnstiles. As an experiment, the management of “Ukrzaliznytsya” plans to provide conductors with cameras and accompanied by a military guard and to increase the level of payment.

Beneficiaries must pay the fare

Wear Ukrzaliznytsia is a systemic problem, and applies not only to suburban commuter rail, and regional and cargo. To save the train from final wear and tear, the government has a year or two, experts say.

Prime Minister Vladimir Groisman in December 2016, said that in 2017 launched an ambitious modernization of “uz” at the expense of loading of the Ukrainian factories with orders for new wagons and locomotives. In total, this year plans to buy 9 million new passagirskiy and freight cars: “We are laying a serious program of modernization of” uz “. Next year we will buy nearly 9,000 new wagons of freight and passenger. Perhaps we’re still some things to correct”, – he said during a visit on Kryukovsky car-building plant.

“About the reform of railway transport in Ukraine is more talking than doing. Unfortunately, there are only recourse is the deterioration of the situation from year to year. We are actually a year or two in order to change something, otherwise the question arises about the impossibility of “Ukrzaliznytsya” to perform their basic functions in the transportation of passengers and cargo. “–says the Director of the Center for transport strategies Sergey Vovk.

According to the Director of Vovk, it is necessary to adopt a new law on railway transport, which will have a mechanism for the compensation of travel, as well as to monetize the benefits that passengers receive money from the state in hand and dispose of them themselves. Also, the new law will give a chance to a private company that will invest in passenger transport.

Now it all depends on how much the government is willing to Finance the purchase of new electric trains, says Alexander cava. “The degree of wear is very large, you should probably upgrade this year, wait is no time. In this year’s budget, this money is not included, but you can change it,” he says.