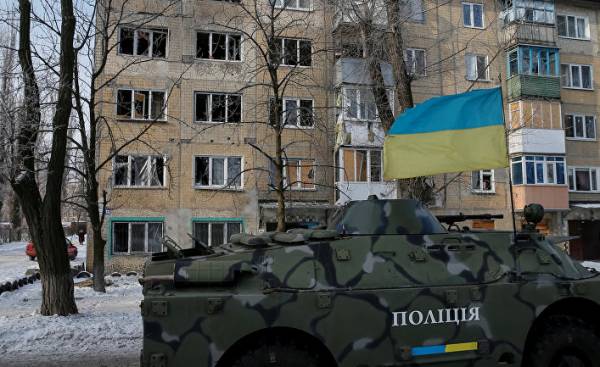 2017 Ukraine began with the intensification of hostilities. For the country and for the region it would be helpful if the Kiev leadership, which is unable to provide control over the East of the country, took measures against Russia with caution and awareness of global events.

In Ukraine, the 2016 game played in the fighting of low intensity. In the clashes that took place between Russian-backed groups and government forces in Eastern Ukraine, according to official figures, killed 217 of the Ukrainian military, 1 282 have been injured. In the regions with the center in Donetsk and Lugansk in the East of the country in the low-intensity war for more than two years killed nearly ten thousand people, including civilians. According to the 16th report published by the Office of the UN high Commissioner for human rights on the situation of human rights in Ukraine, in the East of the country to date, 9 thousand 758 people were killed, 22 thousand 779 people were wounded. In addition, more than a million people have fled their homes because of the war.
And yet in the first month of 2017, the fighting intensified. In January during clashes in the village of Avdeevka, located ten kilometers from Donetsk, eight Ukrainian soldiers were killed and 24 were wounded. On the other hand the clashes have killed 15 Pro-Russian separatists and 25 were injured. In this city you can see a lot of tanks belonging to the Ukrainian army, located right among the buildings.

The reasons for the escalation of the crisis

While in the growth of tension, the parties blame each other, according to the President of Russia Vladimir Putin, the escalation of the crisis due to two main reasons. It is the desire of Ukraine to seek financial support from the West, by making herself a victim by provocation and attempt to hide the economic crisis in the country. However, in one analysis of Foreign Policy about the escalation of the crisis there are comments that Putin is making this move, checks the property of trump.

Meanwhile, Ukraine accused Russia that it does not comply with the Minsk agreement, constantly pulls troops to Ukrainian border and smuggling of militants on Ukrainian land. According to reports citizens of Ukraine and Russia in social networks in relation to these events, there is a strong feeling of hatred.

The growing crisis in the region is not limited only to the Donetsk. Last week the Minister of defence of Ukraine Stepan Poltorak said that the rig, which exploit the Russians, opened fire on Ukrainian military plane. But as a result of this attack, the pilots were not injured.

Along with all these events, the words of the President of Ukraine Petro Poroshenko in an interview with German newspaper Morgenpost show that in the near future, the crisis may even get worse. Poroshenko announced the intention to hold a referendum on his country’s admission to NATO.

Considering what a dead end was driven the country in 2014, following the decision to suspend the negotiations between Ukraine and the EU, when first Crimea in contravention of international law was occupied and then annexed by Russia, and later in the East of Ukraine failed to provide the government, is not so hard to imagine what price can turn this new decision Poroshenko.

Positions of the parties

If we consider this question from the point of view of Ukraine, we are talking about a country that in the eyes of the public is in a difficult economic and political situation, which actually lost the Crimea and may not provide control over the largest industrial cities in the country. In this regard, it is quite normal that Poroshenko seeks time to return Donetsk and Luhansk region by ensuring that cooperation with the West to the extent possible.

Important here from the point of view of Ukraine the point is this: when Ukraine will carry out a large-scale intervention in these beyond its control regions in the East of the country, it will be able to obtain from the West the economic and political support? Frankly, this is a very difficult question. In addition, you need to think twice, as in this case, Russia will act. If Ukraine will take such interference, but did not succeed, it is easy to guess that she will face a much more difficult picture.
If you look from the point of view of Russia, the current situation is the most suitable for her situation. Russia, which has its course in Syria has overshadowed the occupation of Crimea, control of Eastern Ukraine through its support groups. Thus, on the one hand, exerts pressure on the Kiev leadership, on the other — not annexing those territories, like the Crimea, it does not burden itself a separate economic burden and the economic-political pressure from the West.

However, it is not difficult to guess that in case Poroshenko makes a move associated with a referendum on membership in NATO, Russia will intensify its aggressive policy. In this situation Ukraine can do to face the threat of disintegration.

Considering all this, we can conclude that in what direction the events will develop in Ukraine in 2017 will depend not so much from Russia, but from the tactics and strategy of the Ukrainian leadership. Because obviously the current position is convenient and beneficial for Russia. As for Ukraine, while the situation is serious in Eastern Ukraine and the inability of the state to dominate in this region is preserved, the feeling of separation in the country will further increase. In this regard, during the period when the Crimea is under occupation and, above all, when Europe, in addition to its domestic political and economic unrest, struggling with the same problem as a refugee crisis, Poroshenko need to carefully calculate everything. A good example for Ukraine should be the events in Georgia, when former President Mikheil Saakashvili failed to fully appreciate the balance that have developed in the West before the war, which started with Russia in 2008, and the current situation of this country.