The Ukrainian courts began to create legal precedents for damages for destroyed housing in the area ATO. The Pechersky regional court of capital has satisfied the petition of a couple of pensioners from Donbass, who demanded that the state of Ukraine compensation for destroyed during the military conflict in the house. Lawyers argue that such precedents, though uncommon for the Ukrainian Themis, but still happen. How to gather evidence and get compensation for the mine in the bedroom, to understand “Apostrophe”.

A story of victory

A retired couple from the Donetsk region appealed to the Metropolitan court in September last year. In March 2014 at their home in the village of Water was struck by an artillery projectile. On their own, pensioners have repaired the dwelling, but soon after the intensification of the fighting were forced to leave the village and go to the Kiev region. During this time their property became the firing point and was completely destroyed: no Windows, no roof, no doors even.

The Pechersky regional court decided to satisfy the claim of the pensioners and fixed the amount of payments of $ 6.7 million, another 10 thousand pensioners should receive as compensation from the state.

Legal rule, which obliges Ukraine to pay compensation to those who lost their homes in the ATO area, is covered in article 19 of the law “On combating terrorism”. “Compensation of damages caused to the citizens by terrorist act is performed at the expense of the State budget of Ukraine”, — stated in the text of the law. After the amount of compensation that the state has paid to the citizen, by law, should be recovered from individuals, “which caused the damage”, i.e. terrorists. Of course, it is difficult to imagine as the leader of the Donetsk militants Alexander Zakharchenko or his curators in the Kremlin transferred the money for the broken “Grad” houses of civilians, on the Treasury account of Ukraine. But this is not a problem for the victims themselves, because, according to the law, they are entitled to compensation it from the budget.

The law “On combating terrorism” was adopted by Parliament in 2003. Of course, that 14 years ago about the war with Russia was out of the question, however, from 2005 to 2016, the law was repeatedly extended and rewritten, but the point of the “damages” from the budget and was not removed in any version. The destruction of housing could be attributed to the misfortunes of war. In this case, according to the law “On legal regime of martial law”, the state generally has the right to expropriation of property of citizens, and the restoration of the damaged apartments and homes falls on the shoulders of the military authorities, who “provided assistance” to affected owners under the “exercise of authority”, but is not obligated to do so. But legally the war in the Donbass no. Martial law one is not introduced anti-terrorist operation, respectively, all the shells that fly into houses of Ukrainians, fired by terrorists, not a party in the war, and therefore compensation should be paid by Ukraine within the framework of the law “On combating terrorism”.

“The demands are absolutely legitimate, and the only culprit in this situation is our state. After all, they themselves have provided that guarantee, and now don’t want to do. While this is only a decision of the court of first instance. I give almost an absolute guarantee that the state will appeal to the appeal”, — explained the “Apostrophe” Director of strategic Affairs of the Ukrainian Helsinki group on human rights Mikhail was Tarkkala.

How to win the case

For the Respondent the matter do not become. The plaintiffs ‘ attorney Julia Naumenko, who achieved victory in the Pechersk court, said “Apostrophe” that the government is already preparing an appeal and looking for every opportunity to avoid payment.

“In their objections, they argue that we must prove their direct guilt. Do they have their own interpretation and vision of this article: they claim that you need to install first the culprits who caused the harm, and then to recover from the state, but actually to wait for a conviction in such cases is not necessary, — says Naumenko. Now there are claims filed not very many. I think that our government can not even imagine how many destroyed houses of local residents, and, unless such claims, they wouldn’t. Even the Cabinet was no registry of victims. It is not on the state level and is a very big problem. Someone may not believe that they can achieve benefits from the state, many stopped to pay court fee on the background of a difficult financial situation. And some expect that Parliament will accept a special law, which shall require such compensation”.

In Parliament now is the bill No. 2167, which recognizes the right of Ukrainians to compensation for damaged property. But the bill takes into account the interests of only officially registered migrants. About citizens of Ukraine who continue to live in their dilapidated houses and are still waiting for help from the state, there was nothing said. Moreover, the bill is almost the same content — No. 4301 was not supported in Parliament, and therefore to expect that the parliamentarians will accept the other solution, would be naive.

Until the new law, the lawyers advised the Ukrainians to rely on old and to sue in court, demanding compensation. For this you need to gather evidence, and than more, the better.

“First, you need documents that prove ownership of the house or apartment. Secondly, it is necessary to prove that the destruction occurred as a result of a terrorist act during the ATO. Such evidence can be witness statements, photographs, videos, reports of the OSCE. You need to contact the police, so they recorded the crime may have carried out the necessary investigations. Must also be an act of destruction, compiled by specialists of the local administration, which visits and record destruction”, — said Yulia Naumenko.

If the shell hit the house became a cause of the fire, no harm will cause SES to the rescue was an act of fire with the indication of its causes, for example, shelling. But if on the territory of Ukraine to draw up the statement about destruction of the local Commission may without any problems (so say the lawyers), with the occupied cities the situation is more complicated, but not hopeless.

“When in the occupied territories were still in effect, the Ukrainian government, acts of destruction were made. For example, debaltseve has long been controlled by Ukraine, and now it was again occupied by terrorists. But if the acts from the Ukrainian authorities do not, you can try to contact the so-called authorities and administrations that operate in the occupied territories. There is a possibility that all the evidence in the aggregate will be accepted by the court. Plus the man can act independently to make inspection of their destroyed homes, which will be supported by relevant photographs,” said Yulia Naumenko.

Experts say that the time between the judicial practice on such cases will allow Ukraine to more effectively present financial claims handlers of the terrorists in Moscow, it is obvious that not really a fair situation when the firing in Moscow and Kiev pays. “If Ukraine will pay compensation to such people, the money our state in the international judicial institutions can legitimately claim from the aggressor, which caused damage to the budget”, — said Yulia Naumenko.

However, lawyers say that after the decision of the Pechersk district court should not expect a shaft of similar rulings in other courts. We will remind that else in the beginning of last year, a similar case was won by a resident of Slavyansk, but the compensation in the amount of 363 thousand hryvnia, it is still not received. “Judges simply do not take such decisions in favor of citizens, because they are afraid that they will paratextual again. Even if the court decision is not executed in Ukraine, it is a direct route to the ECHR, and there will force the government to implement it, only it will have more money” — summed up Mikhail was Tarkkala. 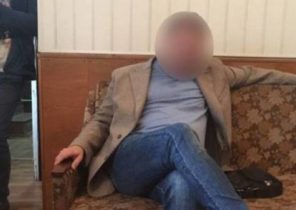