The first telephone conversation between Vladimir Putin and entered the office of President of the United States Donald trump, held on 28 January did not bring any sensations, like immediate lifting of sanctions against Russia.

The parties have merely agreed to maintain regular contacts and continue cooperation in the fight against international terrorism, first and foremost, with the “Islamic state” (banned in Russia organization — approx. ed.).

However, politicians have long pay attention to the strange sympathy that trump is invariably expressed in relation to Putin — as during the election campaign and already in the status of the elected President. Historical analogies are hard to remember — that the candidate for us presidents was scattered in compliments to some foreign leader. Moreover, to this, which is pursuing an aggressive foreign policy, nostalgic for Soviet Union collapsed, the main global rival of the United States, and whose country’s anti-American propaganda has actually become official.

According to media reports, trump and Putin during their dialogue, among other things, agreed to “coordinate” the actions of the US and Russia in Syria. 70-year-old Donald trump sometimes is compared with another Republican, Ronald Reagan, won the post of President of the United States in 69 years and also a native of show business. However, it is impossible to imagine Reagan winning the 1980 election would have phoned Brezhnev and offered him “cooperation” to combat insurgents in Afghanistan, which the Soviet Union then sent troops. This historical contrast illustrates how profoundly different era.

However, the current postmodern era is characterized by the abundance of historical “remakes”. For example, the terrorist “Islamic state” has already taken in promoting the role of the “new Hitler”, the fight against which requires an international coalition.

And in Russia already there are projects to organize a historical repetition of the Yalta agreements of 1945, which determined the post-war device of the world. Only if it then met the leaders of the USSR, USA and great Britain, today it is proposed to organize a meeting of leaders of Russia, USA and China. And to hold it in the same Yalta that becomes the de facto recognition of the annexation of Crimea. About this project in the newspaper “Vedomosti” wrote the Russian philosopher Alexander Rubtsov. Yet such a meeting might look fantastic — but history loves surprises.

Trump’s victory in the presidential elections in the US last year, too many seemed incredible, and only 5 years ago nobody expected that Russia will start a war against Ukraine. The current Russia is trying to play with the US and China “on an equal footing”, although it does not correspond to its real place in the world economy. If the U.S. share of world GDP is almost a quarter (24,41%), China — of 15.41%, Russia — a total of 1.77%. However, the main reason of its participation in the proposed coalition is the presence of Russian nuclear capability remains second in the world after the United States.

When the influence of the countries on the world stage is not determined by the economy, and the military power, this returns us to the era of the twentieth century. And again raises historical questions of why the decline of world communism and collapse of the Soviet Union has not led to a new world order without the threat of global wars, what many dreamed of in the early 1990-ies?

By the way, you can remember this interesting fact — although the United States never de jure recognized the incorporation of the Baltic States in the USSR, they are after the Yalta agreements, acknowledged it de facto. Even in 1991, before the August coup, then-President George H. W. Bush appealed to the leaders of Ukraine with an appeal “not to withdraw from the Union.” The Americans were still thinking in terms of a “geopolitical units”, and they are quite satisfied that all the Soviet space control “reformer” Gorbachev. And the collapse of the Soviet Union as they feared the possibility of chaos in this space. Nevertheless, the USSR has collapsed, and quite bloodless (if you compare, for example, Yugoslavia).

However, looking from today, we can note one important omission from that era, which entailed grave consequences. Immediately after the collapse of the Soviet Union was not convened no international forum (like, for example, the Helsinki meeting of 1975), which would have fixed these geopolitical changes, and identifying a new democratic format of relations between post-Soviet countries and then emerging European Union. Many political leaders then just decided that freedom came by itself and relax…

And in the beginning 2000-x years the world prices for oil and gas went up sharply, this has enriched the Russian economy and led to a new revival of the Imperial ambitions of the Kremlin. But Europe, as it turned out, we absolutely are not ready! The coming to power of the trump was a historic response to the illusion that global liberal values have won easily and forever, while they needed in active development and protection. Today, the main defender of these values is the European Union — and therefore it is possible to notice that Europe is the main target of Russian Imperial propaganda.

And America trump Putin’s Russia hopes to agree — because Trump and Putin tend to “block” thinking. Dialogue on the basis of values they do not take seriously — because they consider themselves “pragmatists”. However, the bare prudent “pragmatism” can sometimes lead to catastrophic failures. Knows about it and he trump, whose business has been repeatedly bankrupt. Understands and Putin, that Crimea and the Eastern regions of Ukraine seemed to be “easy prey”, but led to escalating international sanctions against Russia.

Recently trump has signed a decree on the withdrawal of the U.S. from the TRANS-Pacific partnership, which brings together 12 of the democratic countries of the region and together accounted for 40% of the world economy. This Association was a strong competitor to the growing economic power of China. Interestingly, trump often allows anti-China rhetoric, but in fact, the US withdrawal from the TRANS-Pacific partnership, on the contrary, only strengthens the role of China in the far East.

The same isolationist “pragmatism” trump demonstrates towards the traditional Western transatlantic relations. Although the weakening of these ties will automatically lead to the weakening of the United States, in other words — to results directly opposite of his campaign slogan “Make America great again!”

“New Yalta” provides that all post-Soviet space is the Russian “zone of influence”. In exchange for a joint operation in the middle East trump is ready to close eyes to Russia’s neo-Imperial ambitions of Putin in relation to neighboring countries. The question is — shall I say finally, its important the word Europe? Would free the Europeans to be the next “world section” between the superpowers?

Those who dream of a “new Yalta,” obviously underestimate the scale of changes that have occurred in the world since the early 1990-ies. Globalization cannot be underestimated and it may give a strong civilian response to those presidents who dream to sit in the chair “world leaders” of the past era. Once the fall of the Berlin wall also was a civil revolution, not a planned policy. And you may be fulfilled the prophetic line of Viktor Tsoi, who completed his earthly journey in Latvia: “you will die, be born again, and will be forever”… 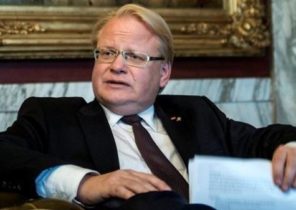