The sky was dark and the plants faded.

For three years the average global temperature was below zero.

New data show that the impact of a meteorite, which led to the extinction of the dinosaurs, was much more important than anyone anticipated. They have been devastating. A new study on this issue, gave us fresh knowledge on how actually serious this event was.

— The cold that followed the fall of the asteroid that formed the Chicxulub crater in Mexico, became a turning point in the history of the Earth, — said the chief author of the study Julie Brugger (Brugger Julia), working at the Potsdam Institute of climate change, the research journal Geophysical research letters.

Became extinct, not just dinosaurs. In fact, most likely during a disaster or almost immediately after it killed half of all species of life on Earth.

Climatologists have conducted an experiment that demonstrated the course of events after the impact. For the reconstruction was first used in the computer modeling, which is usually used in a different context — to create a climate model that includes atmosphere, sea and sea ice.

The result was unexpected and somewhat changed the old notion about this particular mass extinction on the planet (there were several).

The blow was probably terrible, anyway, for the surrounding areas. Around started the extreme heat and extensive fires raged, and tsunamis wildly rolled against the shore.

But this alone would not be enough to destroy so many species.

Therefore, the dominant theory was that then the Earth cooled. Early hypotheses focused on dust, which when struck shot up and blocked the sunlight access to the surface of the Earth. When extinct plants needing the sun, the changes began to spread like circles on the water, and dramatically affect the entire food chain of the planet.

But maybe a mass murderer was another factor that led to the fact that the darkness and global cooling was very long.

The temperature dropped from 27 to 5 degrees

A new study has shown that one of the main reasons for the cold snap was sulphurous gases, which stood out upon impact and formed sulphurous clouds high in the air. They blocked the sunlight and contributed to the fact that the Earth cooled for a much longer time than scientists previously believed.

— A long cold caused by the sulphurous gases, much more has contributed to the mass extinction than the dust that remains in the air only a relatively short time, — said co-author and head of the research group of Georg Fellner (Georg Feulner) the journal Geophysical research letters.

The impact was so massive that it took at least 30 years before the climate recovered. But for many it was too late.

For example, in the tropics, average temperatures dropped from 27 degrees to five.

— Became cold. It is very cold. Dinosaurs used to live in a flourishing world. After hitting three years, the average temperature was below zero, says Julie Brugger.

Due to the cold snap increased polar ice.

In the seas there have been great changes, the marine ecosystem was damaged, many species became extinct, according to a study.

This is confirmed by the fact that the water on the surface became colder, and therefore denser and heavier. When the mass of water began to fall down, warmer layers rising up and probably entailed nutrients. This has led to a strong algae bloom. Most likely, toxic substances from algae is very bad impact on coastal life.

The biggest threat is man

How would have the history of man and Earth if the asteroid missed our planet, we will never know.

In any case, it is clear that when the dinosaurs went extinct, it made room for the development of other living beings.

Catastrophe cleared the way for the evolution of mammals, and thus subsequently, the person who fell on top of the food chain of the Earth.

So we have all reasons to look up to the sky and look for asteroids that could threaten our future, I believe the Potsdam scientists.

Although the most terrible threat still make up a rain of rock and ice flying from space.

— Amazing to see how affected by the impact of a large asteroid on the development of life. Mass extinction shows how vulnerable life on Earth. And it proves how important the climate for all life forms on our planet. But, ironically, now the most urgent threat comes not from a cold climate, but rather from global warming, which provokes people, — says Georg Fellner. 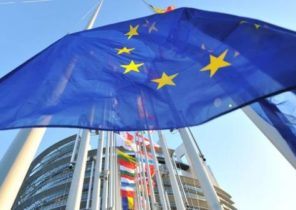