For the first time in 10 years, the visit to Ukraine will drop ship UK recent developments. This was stated by the Secretary of state for defence of great Britain Michael Fallon, after his meeting with the Minister of defence of Ukraine Stepan Poltorak, reports the press service of the Ministry.

“In the course of this year is planned at the port of Odessa the British destroyer. This will be the first in the last 10 years, the visit to Ukraine of the ship of the UK,” said Fallon.

He noted that this year marks 25 years of diplomatic relations between Ukraine and Britain, and expressed the hope that the next quarter century will be as kind to cooperation between States.

“The UK remains committed to helping Ukraine on its path to safeguard the territorial integrity and sovereignty. We will deal with the issue of extending sanctions against Russia until full implementation of all provisions of the Minsk agreements,” – said Fallon.

According to him, will expand cooperation between the naval forces of the two States, in particular, it will be exchange visits of the high command of the Navy. 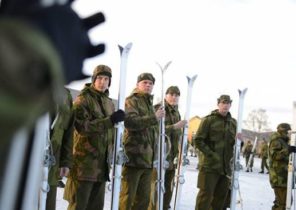 “This will lead to increased tension in relations with Russia”

Poroshenko and Merkel coordinated their positions before the G20 summit