In the coming weeks, the dollar will fall on different segments of the currency market approximately 0.5 hryvnia. The recent decline of the hryvnia is associated with the return after the holidays on the currency market importers, but on Tuesday, the NBU has demonstrated the will to “fill” the peaks of demand in foreign currency auctions, says senior analyst “Alpari” Vadim Iosub.

“If we talk about a long term trend, the torque will gradually decrease to 28 per dollar by the end of the year. The dynamics of the currency will largely depend on the pace of reforms and related with that the next tranches of the IMF loan, the load on the “printing press”, which may require recapitalization of “PrivatBank”, as well as the situation in the South-East of the country and socio-political stability in General. At the end of last year, we witnessed how the increase in political tension quickly realized in the growth of devaluation expectations”, – the expert believes.

We will note, the Ministry of Finance and the national Bank predict that the dollar exchange rate this year will fluctuate in the range of 27.2 – 27,7 hryvnia. This is the figure laid down in the budget for 2017. This forecast is doubt among financial analysts. As the Chairman of the Committee of economists Andriy Novak, the budget for last year laid the dollar within the limits of 24,1 – 24,4 hryvnia, but by the end of the year exceeded 27 hryvnia. 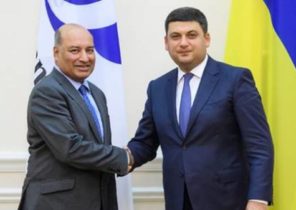