New Year’s eve, the Deputy from “popular front” Sergei Pashinsky said about the conflict, which ended in a shooting. According to the politician, he was attacked by a man in the incident in the forest and stabbed him with a bottle. Then Pashinsky shot the man in the leg. Pashinsky showed photo after hitting a bottle on the head. Photo: facebook.com/Сергій Pashinski

“Returning around 17:00 (31 December – ed.) home, my wife almost drove into the car a tail-light out amongst the unlit road in the woods. I decided to get out of the car to draw the attention of people who were near the vehicle, to the danger they pose to other drivers, effectively blocking the road in the dark. Our request to at least enable the “emergency gang” suddenly a very pissed off one of the men standing next to the car, as it turned out, very drunk. He lunged at me with a bottle in his hand and threatening to kill us. I had the gun, fired a warning shot into the air. The attacker did not stop, he struck me with a bottle on the head, I fell to the ground. I managed to stop the offender, only when lying shot him in the leg,” wrote Pashinsky.

The MP added that once managed to defuse aggressive man, they had the assailant aid, bandaging the leg and then called an ambulance and the police.

However, the man shot Pashinsky, said that the politician violated the rules of handling weapons, and the bullet accidentally hit in the leg and not the torso.

According to Vyacheslav Himikos wounded, he helped to push a stalled car that blocked the path of the MP. The owner of the bus, he said, he saw for the first time. At the same time, the man confessed that he was “a little drunk”. But, according to Chimicus, it came to swinging a weapon before he faced the MP. Also stressed that while the use of weapons, Pashinsky did not shoot a warning in the air as he said this, and took aim at his chest.

“Happiness that the bottle was in the hands of th***l on the head. Shot here, told the victim, pointing at his chest. – There pants of a powder burn. The distance was 15 cm. I hit him with a bottle – if I hadn’t hit, the bullet would be here (in the chest – ed.)”.

According to him, the wife heard the incident on the telephone, so very quickly arrived on the scene and threatened Pashinsky its a pneumatic gun. However, as stated by MP from the “popular front”, Advisor to the interior Minister Anton Gerashchenko, the owner of the car, which began shooting incident, confirmed the version Pashinsky on self-defence. He said that according to the witness of the incident, Pashinsky supposedly really used the weapon in self-defense after being attacked by Chemicus. He also noted that the victim of a gunshot wound had already been brought to justice for beating his wife.

In fact the incident was opened criminal proceedings. Pashinsky withdrew the gun “Glock 19” and ammunition.

However, availability is not the only person involved in similar scandals. Segodnaya recalls resonant cases of the MPs weapons.

Former MP Victor Lozinski was sentenced for the murder The trial of the former Deputy of the Verkhovna Rada from BYUT Victor Lozinsky was one of the biggest in recent years. The court sentenced him to 15 years in prison for the murder of a resident of Kirovohrad region Valery Oliynyk.

The body of the deceased experts have counted 10 gunshot wounds, mostly on his feet. Also, the examination concluded that the deceased numerous bruises, abrasions on the head, fractured sixth rib on the right side, injuries to the upper extremities. Buried the murdered man without a leg.

In the first days after the murder of Lozinsky in response to allegations claimed that in fact he and his friends defended themselves against a dangerous criminal, who allegedly had two guns. And his death is the result of self-defense. 3 Jul 2009 Lozinski 415 votes of the parliamentarians were deprived of the Deputy mandate. By this time he was already on the run, but in March 2010, surrendered to the authorities.

April 20, 2011, the court sentenced Lozinsky to 15 years in prison for the murder of Oliynyk, as well as for illegal possession and handling of weapons and ammunition. The court read out the verdict for 4.5 hours.

Later the sentence Lozinski was reduced to 10 years. Lozinski has been in prison for almost 6 years and, in accordance with the so-called “law Savchenko”, added a two-year period which the convicted person spent in prison (one day counts as two). In April 2016 the ex-MP was released.

In Transcarpathia, the Deputy of regional Council accidentally shot and killed a police major On the night of 17th June, 2016 in the forest near the village of Lubnia velikobereznyansky district Transcarpathia during the hunt killed 45-year-old police major Michael Secka. Police inadvertently shot and killed 39-the summer Deputy of velikobereznyansky district Council – resident S. the Shutter Ivan Psaila. As it turned out, the men went out to hunt in the national Park.

“In a forest, near the Ukrainian-Polish border, a group of individuals carried out illegal hunting. One of the poachers fired from his own hunting rifle and got a 45-year-old police major. At the time he was off duty and died at the scene,” – told the police of Transcarpathia.

Presumably, men are not agreed on the motion path while hunting and the accidental shooting to the police proved fatal. “In particular, as told by one of the witnesses, in the moment when she passed by the buildings, heard a few shots. Therefore, due to the blue fence of the left leg with a bullet Eugene Rakhimov, which was a man with a gun in his hand and personally Ivan Voloshin – the same with weapons and saying: “Come on, let’s get him out of here.” When Eugene Rakhimov was directly on the square, Ivan Voloshin together with the unknown man came back over the fence, on the territory of construction”, – writes “Zakarpattya online”.

“As said in comments by phone the assistant to the Deputy of city Council, shot it just the city Council Deputy Ivan Voloshin”, – said the publication.

Voloshin, in free the said Boguslavskiy and Rakhimov were trespassing on private property complex “Korona”, and then Boguslavsky began a fight with the foreman, and his assistant pulled out a knife. In response to this, according to Voloshin, he pulls out a gun, made first a warning shot into the air, and then shot several in the legs.

The police confirmed that the weapon from which the shots were carried out – a traumatic gun is legally registered. These cases are criminal proceedings under article 296. part 4 of the criminal code of Ukraine (Hooliganism with use of weapons). The Deputy of the Dnepropetrovsk regional Council Oleg Mironov. Фото:most-dnepr.info

5 October 2015 in the river in the Park of Shevchenko, the Deputy of a regional Council Oleg Mironov shot the dog and its owner. The dog’s owner Oleg Kornienko says that in the Park trained animal, and a Deputy and his wife expressed dissatisfaction with the fact that the dog was near them. The result of Mironov’s shot in the leg and the man in the side of the animal. The incident and the dog and its owner were injured. Photo: dp.vgorode.ua

However, the MP claims that are thus protected from an aggressive dog, his wife, and the shots carried out is unknown. However, law enforcement officers seized Mironov weapon that was unregistered.

“The dog is a certified working drath, a week was to submit our Dnepropetrovsk team in the national competition. Polushka perfect strangers is not appropriate and does not touch,” claimed then wounded friends from Dnipropetrovsk. 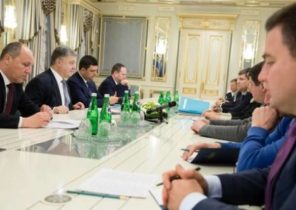