24 Dec 2011 more than 100 thousand people gathered in Moscow to protest against massive fraud in the Duma elections in the same month.

Many street protests were described as the revolt of the middle class and many thought that further developments will lead to a more open and democratic Russia.

But this did not happen.

Five years later, protests in the streets of Moscow is no longer the case — and no one wears a white ribbon as a symbol. Boris Nemtsov is dead, he was shot dead near the Kremlin in February 2015.

When Barack Obama this week sent 35 Russian diplomats in response to the Kremlin’s meddling in the U.S. election, Putin just shrugged. In his strategic calculus Obama is already yesterday and it is possible not to pay attention.

According to Konnander Wilhelm (Vilhelm Konnander), an expert on Russia with extensive experience of Vladimir Putin all this time was a planned long-term strategy that the West never really understood.

After the “orange revolution” in Ukraine from 2004 to 2005, when sympathetic to Russia President Viktor Yanukovych had to leave, Vladimir Putin felt as a threat. According to the Russian picture of the world so-called “color revolution” is not a result of the thrust of the people for democracy and welfare, but a conspiracy of the West.

Right nationalist party “Sweden Democrats” like Putin is no accident

The Kremlin displeasure followed the expansion of the EU and especially were opposed to that cooperation, NATO rushed to the East. Support for right-wing extremists has become a way in the long run to destabilise the EU, and resist further integration in Europe. At the same time increased repression at home. The Kremlin perceived the civil society and independent media as a threat to the system and the grain potential of a “color revolution” in Russia.

A turning point in Georgia

In 2008, Russia joined with the troops in Georgia, and thereby effectively prevented the rapprochement of the country with NATO. It was a turning point: the Western response to political and military claims Putin is mixed up and came to naught.

After fraud in the 2011 elections people’s protests on the streets were very significant, but Putin was well prepared — no “color revolution” did not happen. When did the political turbulence in Ukraine, the strategy had been developed. Putin went on the offensive, first with propaganda and pressure on stakeholders, and then using military force and occupied the Crimea.

Everything seems to happen every time on the same sample. Russia is doing something unexpected and puts the West before it’s already happened fact. After a while we adapt to the new situation.

The paradox is that Russia is much weaker than it seems, our conception of the power of the Kremlin — the most important weapon of Putin.

“The point is that we ourselves were the captors, we are afraid and so adapt, accept the policy, which in other situation will never accept it,” says Wilhelm Konnander.

The West should stop to underestimate Vladimir Putin. Russia helped Donald Trump and American right-wing extremists, and very lightly. On stage the elections in France and Germany, we should prepare for the worst.

After all, there is another scenario, Western society, our democracy, our freedom and our welfare in the long run a more attractive model than the Russian police state. And Vladimir Putin frightens many in the West, but he is afraid primarily of their own minions. 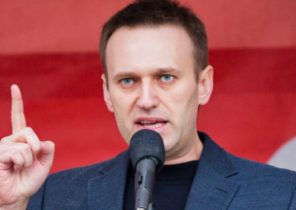