2017 researchers from several universities with the help of advanced laser technology has studied the ice cores extracted in the Alps, and found in these samples traces of the “black death” (plague pandemic, which peaked in the years 1346-1353, approx. transl.).

The study of the structure of the ice core revealed that for the last 2,000 years, the annual lead level in the atmosphere was sharply decreased only once — in the period from 1349 1353 for a year, and this time period corresponds approximately to one of the worst pandemics in human history — the bubonic plague, which killed from one-third to half of Europe’s population. This plague struck the strongest blow to the economy, including mining and smelting of lead. As a result, the concentration of micro-particles of lead in the air decreased, and as a result, in the Alpine glaciers of lead particles began to settle less and less. Scientists are able to identify the core of the annual changes in the concentration of lead particles.

The current pandemic covid-19 swept the world. As shown by recent studies, currently, the emissions decreased significantly as fewer people use cars and planes, besides, more and more manufacturing companies are not working. Content in the air of nitrogen dioxide emitted by vehicles in cities of China, decreased by 40-60 per cent compared to the same period last year. The concentration of carbon monoxide in the atmosphere over new York has halved compared to the level of 2019. Global carbon dioxide emissions decreased by 17 percent compared to last year, and as the study shows, it is expected that in 2020 compared with the previous year recorded the lowest volume of emissions of carbon dioxide (about two billion metric tons, or 5.5 percent of the total emissions recorded in the year 2019).

But the question arises: is there enough high level of these aggregate emissions of polluting substances to affect the structure of tree rings, ice cores and sediments? Remember our planet pandemic covid-19?

Imagine a scientist who in a hundred years will take samples of ice. It is likely that the ice is thicker it will meet the aerosols, says Paul Majewski (Paul Mayewski), Director of the Institute of climate change at the University of Maine; moreover, Majewski — lead author of one of the studies on the “black death”. As you know, aerosols are tiny particles of substances that can remain in the atmosphere in suspension for several days or even weeks, before falling to the ground. The particles of contaminants, e.g., lead, cadmium, and sulphur, are emitted from smokestacks of factories and power plants, from the exhaust pipes of vehicles; in addition, they can be detected in the atmosphere over the mine and metallurgical plants; they can be derived and other sources.

“Using ice cores can be reliably reconstruct the particle size distribution of aerosols with monthly resolution. That is why the pandemic COVID-19 will also be displayed in that ice,” explains paleoclimatologist from Oregon state University of Beisert Cristo (Christo Buizert), which specializiruetsya on the study of ice cores and abrupt climate change. In large areas of many developed countries of the world for the past two or three months of the quarantine has been imposed; in addition, at the moment there is a global economic slowdown. That’s why it seems likely that the sulfur or cadmium in the ice deposits will decline.

Another important aerosol pollution, which, according to Beisert can also appear in ice cores, is soot and, in particular, particulate matter with diameter 2.5 microns and less (they are referred to as PM2. 5). These particles are mainly coal and gas power plants. Also a source of soot are the exhaust pipes of cars and cooking. Microparticles of soot in the negative are a danger to the health of the inhabitants of our planet. After the Chinese city of Wuhan, where is the pandemic was blocked, the level of PM2,5 according to some estimates declined by 44 percent; while in Delhi, PM2. 5 fell by 60 percent, and in Los Angeles at 31 percent.

We believe that in the year 2120 our hypothetical paleoclimatologist will still be able to detect traces of the pandemic COVID-19 to the annual rings of trees. The fact that the growth of trees absorb sulfur, nitrogen oxides and metals such as cadmium, which is taken from the atmosphere into the soil and water. To analyze the nature of changes in annual tree rings, scientists can use mass spectrometry. In tree rings changes will be seen even more clearly than in the ice cores, because the area of distribution of forests is getting much closer to cities and industrial centers than glaciers. Scientists have found that even those particles that reside in the atmosphere for a short period of time, able to fly at a fairly large distance. For example, particles of soot covering the ice and snow of the Arctic, mainly from the combustion of hydrocarbons in the United States and Europe.

In addition, in the future, scientists will be able to detect elevated levels of certain other substances, which are also the markers of the current pandemic. A paleoclimatologist Kim Cobb (Kim Cobb) from Georgia Institute of Technology believes that in sediments of the waterways you will find a large number of discarded plastic PPE, or PPE (from the English. “personal protective equipment” — approx.transl.). “They are likely to be found in river deltas, in coastal sedimentary rocks and, I think, in some lake systems, especially those adjacent to large cities,” says Cobb. In our time, these sediments are constantly deposited a metric ton of plastic, but if they also add billions of gloves, masks and other disposable items, it will lead to the formation of a sediment layer saturated with plastic, and it just would be a disaster. “This layer will be the token that will be of great interest to the geologist in the future,” says Cobb.

And even in the year 3020 the geologist will have the opportunity to distinguish this layer, as the plastic decomposes very long time. Specialist in dendrochronology [the Dating of events and natural phenomena, based on a study of annual rings of wood — approx.transl.] also, most likely, will be able to determine the Dating of the appearance of aerosol particles with the help of some long-lived tree species. And in ice cores, of course, also preserved evidence of the current pandemic, of course, if in the future the glaciers and ice sheets in General still remain on our planet.

In fact, ice is able to tell his story to future scientists even after 100 thousand years. Interestingly, the oldest ice cores, which can be judged on climate change, have an age of several million years. “Ice cores don’t lie, explains Majewski. — It seems to me that in the thickness of the ice can hold all that once was contained in the atmosphere.”

However, the ice Chronicles will be difficult to detect the change in the concentration of carbon dioxide, which is associated with the current pandemic. Usually, the gas exchange between the atmosphere and snow cover is maintained as long as carbon dioxide, entering the snow cover will not be compressed under the action of snow and then turn into ice. And yet, if the current reductions of emissions of carbon dioxide lasts only for few months, then this time will probably be enough for it to significantly impact on the snow surface. However, if the pandemic will stretch longer than we thought, in the ice, of course, will be fixed in the decrease in the concentration of carbon monoxide.

It is quite possible that humanity, in the end, will come to the conclusion that the reduction in the use of hydrocarbons during the current pandemic, is a great opportunity to completely abandon of these raw materials, with the result that the climate will not change abruptly, but gradually. And if that happens, the 2020 will go down in history as a turning point. According to Kim Cobb, after thousands of years our descendants will notice that the year 2020 is likely to be characterized by “a sharp decline in emissions of carbon dioxide and, consequently, low concentration of this gas in the atmosphere — and all because the human race will finally learn to appreciate science and realize their collective responsibility to each other on this little planet”. 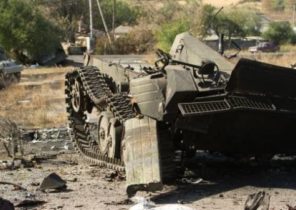