In the Nenets Autonomous district, one of the oldest subjects of the Russian Federation (added in 1929), the protests began. Hundreds and even thousands of people took to the pickets with placards on which was written one sentence: “We are against”. We are talking about the unification of their region with the Arkhangelsk region — a Memorandum of intent to exercise was signed by two governors.

Their decision looks questionable even from the point of view of Russian legislation, however, it shows how Moscow is going to deal with the impending crisis, and a wave of public protests will be on this background to expect. May 13, the acting of the two regions, Alexander Cybulski and Yuri Bezdomny entered into an agreement providing for the merger of the regions would be preceded by the planned September referendum. Both are “Vikings”, so called officials, who are being brought “in a suitcase” from Moscow (though Tsybulskaya for several years before transferring to Arkhangelsk led just NAO), and the two security officers.

Many say that since they were appointed and not elected in the elections, they have no mandate for the adoption and promotion of such big decisions. And the fact that we are dealing with the promotion of Moscow’s ideas, no doubt. In the NAO has established a special working group consisting of leading politicians, and local parliamentarians from the party “United Russia” and close to it associations to prepare for the coming months an action plan that will allow the Union to become a reality. However, it soon turned out that most of the members of the group oppose the project. The authorities have selected 10 most loyal deputies, and others have ceased to invite to meetings and negotiations.

It didn’t help: those who are ignored, appealed to the media and further fueled the already tense situation. In turn, 9 of the 11 “loyal” members, who are invited to a meeting with the acting Governor, as it turned out, count myself among the strong opponents of the unification.

The situation began to spiral out of control because to speak out against the merging of regions called 31 organization of indigenous peoples. For the County with 44-thousand population scale of the protest was surprisingly large. To change the resistance of the local representatives of the “United Russia” in lying almost entirely within the Arctic circle off the coast of the White, Barents and Kara seas region there arrived the Deputy Chairman of the Federation Council Andrey Turchak (Secretary of the General Council “United Russia”). What will be the result of his visit are not yet known, but apparently, the authorities have created a new problem that will continue to grow, especially since, as shown by recent polls, 92% of the population of the NAO are against the merger.

There are many indications that in the near future we will witness another such shares. In the neighboring Nenets Autonomous district the Republic of Komi is already running an initiative group that wants to join the new entity and the region. At the same time you notice that negative attitude to such ideas, there will be enhanced. The Chairman of the Federation Council Valentina Matvienko said at the last meeting of this body, that in Russia there are many regions that would be beneficial to operate within a larger education. They say, for example, on the merger of the Yamalo-Nenets and Khanty-Mansi Autonomous districts and the Tyumen region. They, too, are in the far North.

What dictated the actions of the Russian leadership? It’s simple: money, or rather, in the economic inequality of the regions that you want to consolidate. NAO with its small population is rich, and the Arkhangelsk oblast, where the lives of a million people, poor. The size of the revenue side of the budget first is 24.5 billion rubles, and the second is 107 billion (a large part of the income there are subsidies coming from the center). The population of the region is 25 times more than the population of the Autonomous Okrug, so the gap is huge.

It is also clearly visible in the size of the debt. The NAO’s debt is about 8% of his income, and the Arkhangelsk region — 53%. The merger of the two entities can improve the credit rating and the second to facilitate local authorities in the process of servicing old debt and get new loans. This is an important topic, because such reserve funds, which include authorities at the Federal level, the regional authorities there, and that they in the near future will have to contain the wave of discontent, triggered by lower income. This motive of actions of the Russian leadership (and it does not hide that the main reason for the emergence of concepts about the unification associated with the desire to improve the situation of those regions which threatens a financial collapse) indicates how precarious was the economic situation of Russia, of how limited are the resources available in Moscow today.

As reported recently by experts of the Moscow company “National Credit Ratings” economic plan, which at the end of may was discussed at a Cabinet meeting, came from the fact that the deficit of the RF consolidated budget will amount to 8.5% of GDP. In monetary terms, this is 9 trillion rubles, that is, in the current year budgets will be reduced by 25% of planned revenues. Approximately the same number called the other day analysts from Moscow’s Higher school of Economics (8.9 trillion rubles).

The national wealth Fund (this “financial safety cushion” available to the Russian government) on may 1, was of 114.5 billion dollars, that is, 8.12 trillion rubles. The naked eye can see that if the Russians decide to patch the budget hole only by means of the reserve funds, those may end this year.

Of course, Moscow can also increase debt by selling bonds on the domestic and international market, however, this method of deficit is associated with obvious risks. The capacity of the domestic market amid looming crisis will be reduced, and international financial markets can respond to political pressure (e.g. on the prospects for the introduction of sanctions).

Another reason why the Russian leadership decided to start the process of unification of the Northern regions, can be related to the fact that those who live with oil and gas production. This Arctic territory, which Moscow pays more attention. Some experts believe that it seeks to improve the management efficiency. This will be important in the context of attracting large investments that are needed to develop new oil and gas fields.

The need for further development of the Arctic discussed in Russia for a long time and constantly. Even in the period of the pandemic coronavirus Russian authorities continue to prepare for new projects of investment, although from an economic standpoint with current energy prices in such plans and little sense. 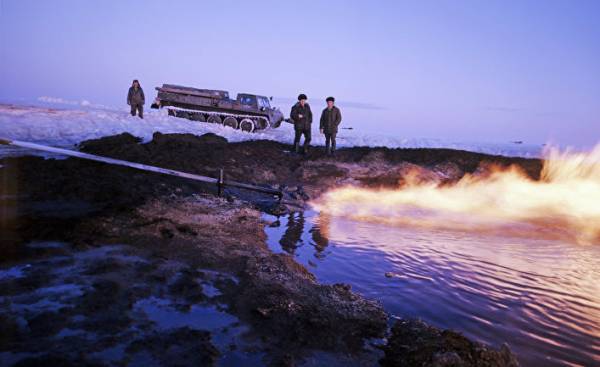 © RIA Novosti, Nikolai Nikitin | go to fotobanka-Nenets Autonomous Okrug, Tyumen oblast. In the tundra, found oil and gas.This is evident in the cost structures of Gazprom, which was described recently, Alexander Razuvaev, included in the top ten most influential Russian analysts. According to him, the production of 1 thousand cubic meters of gas the Russian concern is spending $ 13, 14 — is a tax on the extraction of minerals, transport in Russia — $ 27, shipping to Europe — additional 20. It turns out $ 74, which should also add customs duty at the rate of 30%. Thus Gazprom’s activities is profitable only if the price is held at 100 dollars for 1 thousand cubic meters.

Now quotes are much lower, but Russian authorities expect that they will return to pre-crisis indicators, and this, as pointed out by many experts, based their main strategy for dealing with the crisis. Using proven schemes and being under the influence of the oil and gas lobby, they, regardless of the possible political and social consequences, continue to wait for the return of the “good old times”.

This is a long-term political strategy of the Kremlin, so even though influential advisors like Alexei Kudrin urged him to seize the moment and finally to overcome dependence on exports of hydrocarbons, it is likely they do not listen. Why? It’s the nature of the system built by Putin. The Putin regime (rightly so) call authoritarian, believing that within its framework the government achieves obedience “deep people” with the help of law enforcement. This, however, is simplistic and wrong approach.

Of course, no one denies that in Russia there is an extensive system of repression, including persecution of political opponents of the Kremlin, there is little doubt that the Russian regime is able to act tough, however, its essence in the other.

In this context, we should pay attention to the idea which was formulated by the famous economist Vyacheslav Inozemtsev. In his opinion, the essence of Putin created the system was and is to using hydrocarbon rents to bribe companies. In the Russian mining sector now employs only 1.5% of the economically active Russians, but they create cash flow, he the main resource of the authorities. Putin’s team or wider — the Russian bureaucracy just does not know how to function in the other part, she always instinctively returns to the old scheme. That is why not sounding the first decade of appeals Kudrin and other economists saying that Russia should get off the “hydrocarbon needle” does not lead to the emergence of a new economic plan for the country. The government is not able to create it, especially since it continues to be subjected to pressure from lobbyists for the oil and gas sector.