The woman, according to her, tried three times to kill because it showed people’s chests, on the day she organized the stock was not there. As she says, now working in the street must deal with others.

When flares were lit, and the Concorde plunged into a purple cloud, and 50 scantily clad women windy March morning ran from the police, holding banners high above their heads, the 29-year-old Inna Shevchenko was 500 kilometers from Paris. In Amsterdam she was preparing to make a feminist speech.

Inna Shevchenko is leader of Femen, women who undress out of protest. Before you Board the train, she once again instructed his girls. Said that it is necessary to shout loudly and calmly that their may be arrested by the police that they will aim the camera, and that the one who’s scared now, can still go. Everyone else: go!

And here women movement Femen without their leader, went to the place of protest — a large area to the East of the Champs elysées, in the center of which protrudes the obelisk, similar to phallus. Here had to go through the campaign on International women’s day on 8 March — just before Europe was sunk in a morass of virus isolation.

They had crossed the river Seine and passed the Eiffel tower. Then simultaneously dropped the clothes on the ground, revealing inscriptions on the body and began to shout slogans, rehearsed in advance.

For over ten years, supporters of the group Femen exposed, to assert the rights of women. Inna Shevchenko — a rebel first hour. There was a time when they are with friends after each event fall on the pages of Newspapers. Some loved them, others hated, some of them were tortured and persecuted. The activists of other movements for the rights of women debated the question, does the demonstration of nudity feminism or benefits, does the group itself a sex object, or its members use their Breasts as weapons of struggle for women’s freedom.

Those days are long gone. However, hundreds of thousands of women continue to take to the streets to protest against violence and murder. Motion #MeToo opened thousands of cases of harassment and sexual violence. 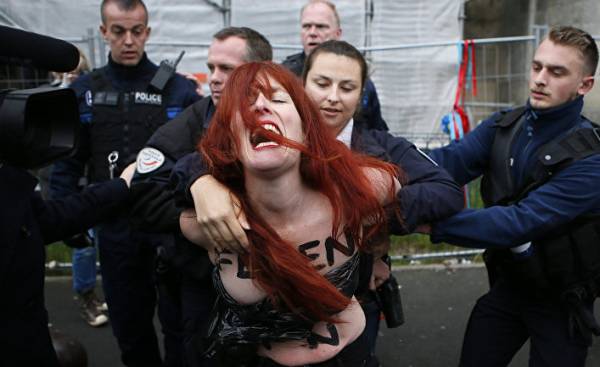 But, it seems that women don’t need to bare Breasts, to be heard. About Femen stopped talking.

The club that started it all, broke up, its members scattered across Europe. But Femen does exist. The core of the band is based now in Kiev and in Paris. And its leader Inna Shevchenko for eight years living in France as political refugee.

Who’s coming out now on the street with Femen?

Friday, 19:30, quarter Cartier Saint-Germain-des-Prés. A wooden door leads to the courtyard, where at the beginning of March already roses bloom in pots. Espace des Femmes, “space for women” written above the entrance to the house — words like political program. Within 50 activists prepare for action.

Many came here for the first time. Is the student a maximum of the second semester, making the first tentative steps in the protest movement. Here to teach the choreography of protest, trying on clothing. Then they both come up with provocative slogans, which will then shout during a protest. What will be discussed at the next action, clear about the coronavirus.

Participants of the action dressed in white trousers and jackets fasten in the back at the waist, tying the sleeves knot at the stomach. The faces — safety glasses as other hospital disinfectants. On the naked breast women draw each other Femen logos: left and right in a circle, separated by a vertical line. Then all stand up in rows.

The room in which rehearsals, ballet room with a huge mirror on the wall, in which you can monitor yourself during your workout. In one corner stands a table with cake and Apple juice.

In the center — Inna Shevchenko. For girls she’s the one who knows how to hold the poster: the maximum stretching his arms up, not to close the face. She is a woman, which is when all sit, a woman who long ago cut down with a chainsaw a large wooden cross as a sign of solidarity with the Russian punk band Pussy Riot.

Ten years is a lot for social movements. Looking for rehearsal in the ballet room, you can ask the question: why Femen exhausted? Or: what makes these young women today look at Inna Shevchenko as an idol?

Ask one of those present here girls, 24 years old.

— Why do you want to participate in the actions of Femen?

— Because I don’t like when every day somewhere kill a woman just because she’s a woman”.

— Why are you naked?

— Don’t you think that feminism has achieved something in recent years?

— Damn, he has not achieved!

Oksana Shachko, Anna Hutsol, Sasha Shevchenko — was the name of the women who founded Femen in Kiev. It was in 2008, they came to the capital from a provincial city in Western Ukraine. They were very young, 17 years — almost girls. What they were up to, was a protest against the limitations life has in store for them post-Soviet society against prostitution, and religion, against the all-powerful men, Putin, Yanukovych, Berlusconi.

One day they decided to write his words of protest. And soon in Newspapers all over the world there were photos of young women with bare Breasts and his hands clenched into fists.

They have become the embodiment of feminist protest. Hundreds of women around the world joined him and also stripped.

Oksana, Sasha, Anna and Inna… a long time ago they are not a team. They fled from political persecution abroad, where the group disbanded. Anna first went to Switzerland, then returned to Ukraine. Sasha, Oksana and Inna were arguing about the future of Femen in France. In the summer of 2018 Oksana was found dead in her Paris apartment. There was one Inna Shevchenko. 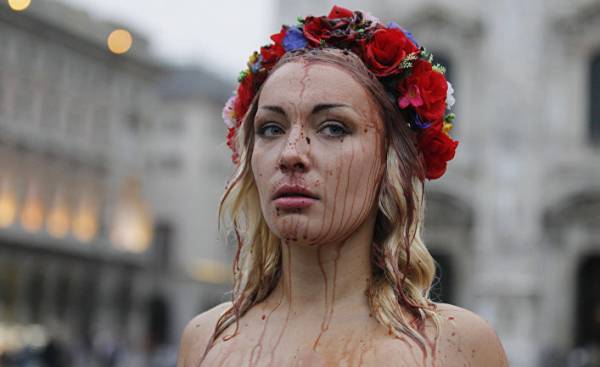 We agreed to meet and talk with her in the same restaurant with white curtains and mirrored walls, serves steaks. She ordered a croissant. “I always something to eat” she apologized.

Shevchenko says that drew attention to Femen, seeing their call in one of the social networks. It was in 2009, Femen is going to protest at the University. The student of faculty of journalism of Shevchenko was at the time 19 years old, and she decided to join the campaign. There she heard what he was talking about Oksana, Anna and Sasha. And it captured it. She soon stood in the first range of motion.

We can say that since women are sometimes show their Breasts the world, Femen has lost clout. But not destroyed whether Femen itself?

According to Inna Shevchenko, is not the case. “The fact that the naked body can be seen everywhere, not an indication that the human rights situation of women has improved. The female body still turns to the object, everywhere and all the time.”

She says that she doesn’t bother being called a radical. According to her, Femen was never a radical group. “What’s radical is that women live freely and openly Express themselves without fear of being punished for it?”

This interview took place a week after film Director Roman Polanski was awarded the césar award, the highest cinematic award in France, although he is still not acquitted of rape. In protest against the decision of the jury actress Adel Enel (Adèle Haenel) left the hall, and the famous French writer Virginie Depant (Virginie Despentes) branded French cinema in one of his essays. “All silent, all smiling, — she wrote. — When the abuser is a powerful man, giving him signs of attention and solidarity.”

According to Inna Shevchenko, the thing, Polanski proves that women’s rights are violated all over the world “a few dangerous despots-men.” The proportion of women in Parliament reduced. In Russia every 60 minutes to kill the woman. Motion #MeToo attracted attention, but this is not a victory of feminism. “We didn’t win,” she said.

She says an hour and a half and can’t stop. Why Inna Shevchenko continues to struggle? Her answer: “I don’t want to be a feminist. I dream of a time when feminism is not needed.”

She says she sometimes wakes up in the morning and thinks: okay, I’m done, time to finish. But then she sees the girls who come to her events, who write to her to fill out the questionnaire and participating in the movement. Maybe she came to the end of their struggle, but for these girls the fight is just beginning.

“It’s only then you can stop when you reach your goal. He who stops early, it seems. A society centuries waiting for the women that they give up.”

Then Shevchenko talks about the protest in 2011 in the capital of Belarus Minsk. They gave me the same mustache, as President Lukashenko and demanded freedom for political prisoners. “We were screaming, but nothing more was done.” People from the KGB and they were captured and shoved into a paddy wagon where they had to sit with tied hands behind his back, holding his head between his knees. Five hours later the car stopped in some woods, where the girls hair cut, doused them with green paint and vegetable oil. While one man kept repeating that burn them all and send the bodies to the mothers.

At some point — this can be read in the media — naked women dropped out of the car. KGB never commented on this incident. One girl then committed suicide. Inna Shevchenko had to apply three times to the therapist.

She says: “I’m 29 years, and I have three times almost killed. And for what? Because I took off his shirt and wrote slogans on the body, is it so funny?”

She believes that more should not stand in the first row during demonstrations. Now she leads a column in the French magazine “Charlie Hebdo”, speaking at congresses, as, for example, in Amsterdam on the occasion of International women’s day, while in Paris fifty women chanted Urgence viral, virus patriarchale (“life is in danger from the virus of Patriarchy”) over a large area with almost no spectators.

Felt how tired Inna Shevchenko. Maybe she did stop fighting, but she forgot how to do it. Need to solve a few personal problems. But she knows she has achieved something.

She can catch hints of uncertainty. For example, when Shevchenko said that in Europe not everything is so rosy and that you must fight on. But after a few moments, admits that if they had grown up in France, it would not be a rebel. Because, in her opinion, women in France in comparison with Ukraine doing very well. Sometimes Inna Shevchenko doubt it was her decision to respond to the call by the group Femen at the University, to fortune or misfortune.